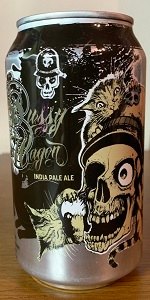 On draught poured into a tulip.

Pours on the lighter side of amber. Moderate head the dissipates relatively quickly. Aroma is not as strong as one might think for a 2IPA. Pine dominates with a hint of citrus.

Initial mouth feel is on the clean side, with a somewhat resin initial hop taste. The beer is on the light side in terms of malt - think traditional West Coast IPA.

The finish is dry with the resin lingering a good while.

I wouldn't designate this as a 2IPA in my book. It needs either more hops, a darker malt, or both. Outstanding? Probably not, but for a regular IPA, it's quite drinkable & I may get another.

On tap at Hedgehog Bar & Grill, Waller, TX. NOTE: The tap handle is marked "Kitty Wagon", what with the Hedgehog being a family establishment and all. Lots of pine and citrus, good balance. DIPA's are not really my thing anymore but this is definitely a good one. Every hop lover should give it a try.

One of the best IPA's with a high IBU rating. Poured into a tulip. Beautiful cloudy amber color with quick hints of strong citrus and pine. Though this is definitely a bitter beer, the taste is absolutely delicious and has a lovely medium carbonation feel in the mouth. Definitely recommended for IPA lovers.

Easily the best DIPA in TX. Head is white with good retention. Smell is floral & citrusy. Taste is extremely refreshing - very hop forward. I rately fill out a review (rather I often just do the numeric rating for my own record). But this beer is too good to not be more well known and it'd be great to see larger distrobution.

Poured into an imperial pint glass from a 32oz Crowler.

Appearance: Deep copper with slight haze and 1 finger of head

Taste: The citrus and pine are up front with the earthy bitterness coming in the middle leading to a balanced finish with malt

Mouthfeel: Medium with some resin in the finish

Overall: A solid West-Coast style IPA in my opinion. Plenty of layers hop flavors, yet isn't afraid to balance it appropriately with some malt to make for a very crushable IPA.

S: Bright citrus, dank with a west coast feel. Not too malty.

T: Very similar on the taste. I get the west coast influence, but it's brighter than most west coast IPAs.

O: Great IPA. I like fresh Prestige and Cali Green a bit more, but this one is no slouch. Definitely excited for them to can this.

Very low malt, and quite a nice floral showing on the nose and palate, however it is quite harsh with the bittering hops and lacks much smooth character. Overall a good ipa but not the best

A. Orange in color, white foamy head, lots of lacing
S. Citrusy hops and other fruity nose
T. Lots more citrusy hops, orange etc
M. Nice carbonation, very drinkable
O. It's alright, hoppy but not overwhelming, but not complex at all, not too terribly impressed. Had in shaker pint at Harvest House in Denton

Tasted on draft at Petrol Station. Satisfying DIPA with well-balanced flavor, avoiding the sweet DIPA bombs I unfortunately run into too often. For those who don't know, Brash Brewing Co. is the brainchild of Ben Fullelove, the owner of Petrol Station, a de rigeur stop when in the greater Houston area.

Have had this a few times now. Pussy Wagon is definitely a go-to for a DIPA, and this is hands down the best one I've had from a Texas brewery. Dank and juicy, the beer is clear with a foamy white head. The taste and mouthfeel are perfectly balanced, no hard edges.

Pours a very clear yellow with a thin head that leaves lacing down the glass. Nose is amazing! So much citrus and fruit. Huge notes of mango, grapefruit, and a little orange peel. Mouthfeel is light and crisp. Taste is a little piney with some citrus peel, lingering bitter finish. Really solid offering, this beer smells amazing.

A: Pours a clear golden/yellow color with a two finger white head. Good retention and some patchy lace is left behind.
S: Up front is juicy hops, grapefruit and resin. Soapy, perfume like hops which are enjoyable. After the hop punch, this fades to nothing. Again, enjoyable, if not particularly exceptional.
T: Up front is similar to the nose. Perfume like, even juicy hops. Just as quickly as the juiciness shows itself, then comes the resiny bitter hops. Abrasive for sure, while not out of line with the style. There are plenty I like more.
M/O: A medium body. The few times I have had this, I have been disappointed with the carbonation. It just seems a bit thin and lifeless. Considering the style, and the abrasive nature for Brash, this is not hard to sip on. While I have had this a few times, and it is more than a one off try for me. It is not one of my favorite DIPA's made in the city.

I found this more enjoyable to drink than EZ-7, which for a non hop head says something. I still find it a bit one noted, which is different than simple. Live Oak Hefe is amazingly simple, but not one noted. By the way I had that very beer next, and was in awe at how much I still love it. For me, this is a good DIPA though plenty of others I like made within the Houston area, and for me this will be forgotten eventually. Especially on my next four pack of Saint Arnold Endeavor.

Finally a dank and juicy IPA being made in Houston. The local IPA scene leaves much to be desired. Luckily Brash just came out an punched beer drinkers taste buds right in the face with 115 IBUs but somehow still managed to come off as balanced. Can't wait to try Cali Green next.

Great IPA. Picked up a pint at Petrol Station. Way more balanced than their EZ-7 offering. The 8% ABV is hidden well and the taste follows the aroma of topical west coast darkness, but it is not overpowering. Can't wait to have this in 4 packs.