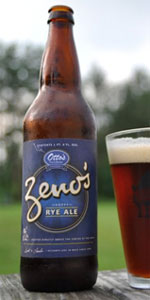 On tap at Industry Public House, Robinson. Stopped for lunch before our trip to Oregon to see Jordyn and Hannah.

Deep copper color. Leah gets a nose of peach. The rye and hops sits well. The lingering taste is really good on the back of the tongue.

Poured from a 12 oz bottle into a Dogfish tulip

T/F: Rich caramel malts with a sharp and spicy rye-tinged hop profile. Nice and bitter... some evergreen notes with the rye standing out. Very clean... finish is crisp and bitter. Well carbonated.

O: One of Otto's best beers... brewed for Zeno's downtown (only place you can have it on draft).

Pretty straightforward, fairly pedestrian beer. The spice & heft that you'd normally associate with rye is mostly absent, it plays as a nondescript pale ale with some medium hop bitterness being the only thing that really stands out.

Always nice to come across a new rye beer.

Overall, a pretty decent ale here. Consistent hop influence with mild resin and some pine on as well. Mild spice tones from hops also. Smooth. Pretty easy drinking. Certainly not bland and not trying to obliterate your palate. A nice beer.

DATE TASTED: October 18, 2013 ... GLASSWARE: Howard's Pub pint... OCCASION: another booty of beer for beating Ryan in fantasy baseball--prosit, friend!... APPEARANCE: medium-dark brown body that cascades upward thoroughly; head is almost as white as Santa's beard-- thick and frothy with thick lacing... AROMA: bright rye scent reminiscent of vanilla and clove; some cinnamon and cookie dough as well; nicely complex..PALATE: full-bodied, big in the mouth and substantial in its aftertaste; nicely balanced...TASTE: an ale that retreats at its impact; actively citric at the throat but easy-drinking with a doughy exhale...OVERALL: a slap of something heavier hits at the glass's bottom; a winner in the sense that most pales occupy the same space on the tongue, while this beer--and Otto's is a great place to enjoy beer, BTW--engages in a slightly nuanced way with some extra ABV to boot...

I'm getting repetitive thanks syndrome from all the good beer dropping out of the sky from my good friend beerisheaven. Add another brick to the wall. 22 oz. bottle split with my wife while re-watching the first couple episodes of 24. The first potential black presidential candidate, David Palmer. Hah!

Zeno's Hoppy Rye Ale is a slick little doppleganger. The first taste reveals layers going back to the Plessianic Era. Big sweet malts threaten to make this too too much, but the rye asserts itself like a WWW wrestler; handful or earth & spices jar the back of the tongue. Then the hops. The hops! They show up & stick. Nice bitterness with a dose of pine, orange. I could slurp this like river water after the canoe capsizes.

Tons of flavor, nice layers, & the tastes all feed off each other in that way that truly good beers do. Is there anything better than having an excellent rye beer in your glass? Well, yeah, but this is niiiice.

Appearance - A very dark red color,almost brown. A off white head formed in pouring and faded fast giving way to some nice lacing.

Smell - Hops hit you up front. Citrus and pine really take hold. Can pick up a faint hint of caramel, but the hops really dominate.

Taste - Sweetness of caramel and malty bread like flavor hit the mouth right when the beer meets the tongue. This is quickly overshadowed (but in a pleasant way) by the hoppiness of the beer. The citrus hop flavor stands out, but a bit of the pine works in with the citrus. Very tasty.

Mouthfeel - I would say just about a perfect level of carbonation and a nice smooth body. This is one beer that is both easy and enjoyable to drink.

Overall - The best Rye I have ever had, and high on my overall list. In terms of greatness/price ratio it is likely the highest beer of all I have ever had.

A: Clear, deep amber color with about a finger of white head.

M: Awesome - moderate carbonation and very smooth/drinkable despite the hoppiness.

D: I'm not a huge fan of hoppy beers, but man, this was good. It was perfectly balanced and extremely enjoyable to drink. Something that I would definitely pick up again.

Smells like citrus and aromatic hops. A little caramel malt comes through

Lots of carbonation in this beer and lots of flavor. Thanks to Otto's and Zeno's for this rye ale.

Would definitely grab this one again

On-tap at Zeno's earlier this afternoon.

A- Body is a nearly transparent red/amber hue. Served with a 1/2 finger or so slightly rusty foamy head. Head fades to a thick collar but has great retention from there. Some lacing left behind in the glass.

S-Nice hoppy smell, lots of grapefruit and other citrus (lemon, orange) upfront but a good bready backbone with a hint of caramel.

T- Taste is similar to the smell. Nice hoppy flavor with a good dose of citrus hops upfront and a substantial bready rye and caramel malt backbone. Finish is more hoppy as the bitterness begins to kick in but a sweet breadiness lingers to balance out the bitterness.

D- This is awesome and one of my favorite rye beers-2nd only to Cane & Ebel. Well put together and very drinkable-I'd like to try other offerings from Otto's pub.

A 650 mL bottle purchased at Zeno's To Go, the only place to get this epic rye ale.

A: The rye ale is a full brown hue, darker by a few shades than the bottle that it came in. A finger and a half of head, an off-white color that looks just a little dirty, is trying to lace around my mug.

T: The first sip reveals the depth of the rye, a dark bready taste that offers just a bit of caraway. Matched with the rye is an in-your-face hop profile, citrusy in nature. The flavors alternate, rye-hop-rye before settling in with a pleasantly hoppy finish. An awesome rye beer.

M: The rye is spicy and the hops are alive with bite. Easily one of the best rye beers I've ever had.

D: I can't rave enough about this beer. I'm happy to report that I'll be in State College next weekend and will stock up on a few more bottles.

A - Poured a slightly hazy orange/caramel-colored body with a finger's worth of creamy beige head that retained well and deposited some stringy lacing around the glass.

M - Medium bodied with a syrupy texture and moderate carbonation. Dry, spicy finish with moderate hop bitterness that lingers for a while on the palate.

Had on-tap at Zeno's a while back for a nice visit back to Penn State.

I had told the bartender that I was a big fan of Troegs Nugget Nectar, he suggested I try the new rye ale brewed by Otto's just for Zeno's. Although Nugget Nectar, and this rye beer are very different, I definitely feel they are similarly appealing in some senses.

The beer poured a nice dark amber color. Seemed nearly black inside dark Zeno's but when I held it to the light, you could see the nice ambor color. It had a small head to it, but it held throughout consuming the beer.

It had an awesome combination of a hoppy, bready, and malty smell. Really got me excited to drink the beer.

Phenomenal taste and mouthfeel. It has a nice full body that completely coats your mouth, plently of flavor. I notice a great hop character right of the bat, followed by an awesome rye after taste.

I've had Founder's Red Rye, and Cane & Ebel, both awesome beers. But, I really feel Zeno's Rye is a better Rye. I just has a much better feel in your mouth, and a more full body than the Founders beers. Give it a try if you make it to State College!!

Had this last night at Zeno's pub. Glad to see that this one will be available in bottles soon. Poured into a pint glass by Dave.

A: Pours a rusty copper with a nice one finger light khaki head. Pretty hazy and one of the best lacers that I have ever seen.

S: I didn't realize this was a Rye IPA so I was caught off guard with the vast hop scent. A nice blend of citrus, cascade I would assume, but a nice pine characteristic as well. Some nice rye bready scents and caramel come through as well.

T: Taste is spot on for the style. Very nice hop aspects to this beer with great orange, lemon and light fruit characteristics. Those are all balance nicely with a pine and rye bready quality.

Overall, another great offering by Otto's for the great pub that is Zeno's.

The first in a new line of brews made especially for Zeno's by hometown micro Otto's.

S-Citrus hop pop up front with a substantial biscuity malt profile. A bit of extra spiciness with the rye malt addition.

T-Really nice, like a "poor" mans Founder's Red's Rye. Plenty of spiciness, citrusy hops and a solid biscuit bas makes this one a tasty brew.

D-A most inpressive house brew. Plenty of flavour and crispness. This one is an easy drinking and eminently sessionable brew. If this is an indication of what's to come from this series I welcome more additions!

New draft brewed by Otto's for Zeno's Pub, casks also forthcoming I've heard. Not all that much head. Nice reddish hue. Grainy/spicy flavors from the Rye. A bit of hops to balance and a nice finish make this one an easy drinker for the rest of the Fall until the kegs run out.