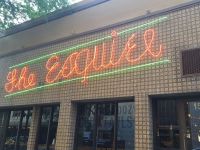 View: Place Reviews
Reviews: 5 | Ratings: 19 | Log in to view all ratings and sort
Reviews by gtermi:

I've been to the Esquire a couple times in the recent past for beers and/or cocktails, and was happy with the experience, so I thought I'd try them for dinner. I sat at the bar, and the lady who helped me was very knowledgable about what was on tap; she recommended a nice oatmeal IPA that she said "changed her life". After the beer (delicious), I ordered the 8oz. chicken-fried ribeye, and asked if they could hold the gravy. "No problem, I'll give it to you on the side" was her reply. Unfortunately, when the plate arrived, the entire dish of steak and potatoes was smothered in white gravy. No worries; I sent the food back, and decided to eliminate the possibility for another screw-up by ordering the regular rib-eye, medium rare, even though it was 15 bucks more. When the steak arrived (by itself, without the potatoes and no sides) it was very rare, bloody, and actually cool in the center, Again, no worries, I understand that one persons rare may be another's well-done, so no lost points there. What really put the damper on the meal were the chunks of small bone that I found throughout the steak. My second bite in I nearly broke a tooth on a piece of bb sized bone, and then hit another chunk of larger tooth-sized bone two bites later. I mentioned this to me server, and she was very apologetic, and notified the manager. I continued eating the steak, hit more bone, and decided to cut my losses halfway through the meal. Eventually the manager came out, was apoligetic, and said he'd "mention something" to the cooking staff. The bar manager did offer to give me a free dessert, but since I'm not much of a dessert guy, I wasn't interested. I figured at the very least maybe the cost of the meal woul be reduced to the price of what I originally ordered, but not so. (I actually thought that the meal should have been gratis) Anyway, I paid full price for a very sub-par dinner, and came away extremely dissatisfied. I don't believe I'll be back.

Great atmosphere if you are looking for a dark low key place. I had a burger and fries to eat. The burger was outstanding and the fries were not bad. They make their own ketchup as well. The beer selection wasn't to vast but it was good. Most beers on tap were local and they offer a decent bottle selection. The staff was knowledgeable and friendly. I would recommend this place for sure!

Esquire Tavern - Note that the area can appear a bit seedy, but I didn't run into any issues.

As you enter the long bar is on your left with some smaller booths on your right. There is a larger area in back with really cool windows.

High tin ceilings, some cool old fan/light fixtures, antler lights, stuffed critter and some funky velvet wall paper add to the lived in but not run down look.

There is also a patio in back.

TX blues and Austin style country on the speakers. There is also live music later at night.

Servers are a young, friendly and a slightly hipster bunch. Service is beer savvy but can get slow as they get crowded.

12 TX crafts on tap and a pretty solid bottle and can list will keep you lubricated.

Minor complaint, the turn the lights down to low at night. I want to see my food and beer...

I enjoyed my stop here and thing most folks will as well.

The wife and I made The Esquire into our haven during a short trip to San Antonio to visit family. Amidst the cheesy-touristy-rowdy River Walk restaurants and bars, The Esquire stands out as classy and cool.

The bar is bigger than the state of Rhode Island, and there are also booths right by it and a dining area with tables past the bar. From there, go on the patio or walk down to the river. Pretty neat.

11 taps, of which one is Modelo and ten are Texan craft brews, including Live Oak (three handles), Ranger Creek (2), Shiner (Blonde) and 512 and Independence (2 taps each).

Basic food menu but nice stuff, even though we were a large group and some of the items came cold or overcooked. My bison burger with pimento cheese was delightful but grossly well-done (I ordered rare) and far from hot. The wife's grilled pimento-cheese sandwich was the clear winner.

Later on I went back to The Esquire two more times only for drinks and loved it. The cocktail program is stunning and reminded me of the the better cocktail clubs in NYC such as Death&Co.

Not a cheap place to booze up by any means, but a total must for the discerning drinker.

Longest (wooden) bar top in Texas? Sure, that would make this a novelty pick. No, they've taken an iconic but utter dive bar and turned it into a destination. Classy and slightly chaotic, this is your best bet on the riverwalk for local/Texas craft beer.

I visited here twice in one week mid-June. First time was a busy, bustling Thursday night and the waitstaff seemed disorganized and the place looked more hipster than local—or tourist. Take the good and the bad.

Second time was early in the week, again in the evening. Much more relaxed vibe. Got a chance to chat with the bartender. Got a seat at the bar, even. Locals and tourists comingled, with the hipster patron vibe turned down. (This isn’t San Francisco folks—or Austin!)

Physical space aside, there’s nothing about the “new” Esquire that’s remotely similar to the “old” one. And depending on your style, that’s not necessarily a bad thing. Fun fact: apparently the old Esquire had 311 911 calls their last year—or one a day, with Sundays off!

Ask the bartenders, the staff, even the customers and it seems like a sea change. Even the bathroom attendant professed to having never set foot in the Esquire pre-renovation. While I appreciate the changes I feel like the edge/grit/character of the old Esquire hasn’t only been cleaned up but lost in some ways.

They’ve been open long enough to work out the opening-night glitches, yet in both my visits I found they suffered from some minor disorganization amidst outright chaos. I appreciated the irony of my party’s tab being discounted on my first visit since the kitchen mixed up an order, followed by my tap on the second visit being combined with another party’s due to another mix-up. Bar karma? Either way they sorted it out and it was fine.
Food was fantastic, beer selection is solid with the tap handles dominated by local, Texas brews ((512), Live Oak, Ranger Creek). Oddly enough while most beers are $5-$6 a pint the times I was there they had Ranger Creek’s OPA going for $7 a pint. Seeing as how I’ll see this elsewhere around town for $3 to $4 I thought it was a misprint. If beer isn’t your thing the Esquire also has an incredible mixed drinks program with all sorts of cool concoctions.

A class act all the way.