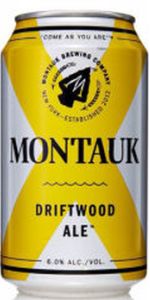 Notes: Our flagship ale is brewed with American hops that even out of it's malty base. This well-balanced English Style Pale Ale is enjoyable all year round.
View: More Beers | Place Reviews
Recent ratings and reviews. | Log in to view more ratings + sorting options.
3.91 by adamstef on Apr 10, 2022
3.8 by Timfromthemainland from New York on Oct 14, 2021
4.18 by chrishiker1409 from New York on Jul 26, 2021

Budweiser/Corona/Coors drinkers should elevate their beer drinking experience and make this the standard. Very flavorful but mild. Perfect carbonation level. 6 percent alcohol gives a warming effect. Very drinkable. Superior to anything the mega breweries put out.

Gotta give it up for m'man, Jimmy B from NYC! We wagered a six-pack on the Pens/Rangers series back during the 2015-'16 NHL playovs & he actually came through. I would have preferred a mixed-sixer, but since I did not specify, it was sehr gut. I doled out the rest acCANdingly with one held in abeyance for The CANQuest (tm).

For a relatively new brewery, they seem to have a pretty good presence. I saw them on-tap at Penn Station during a recent layover. Now, it was time for the Crack! to be followed by a gentle Glug. I was rewarded with the quick formation of two-plus fingers of dense, foamy, rocky, tawny head with modest retention, slowly slinking away to wispiness, but leaving nice lacing in its wake. I waffled on its color. Was it solid Amber or Golden-Amber (SRM = >7, < 9 OR > 5, < 7)? The onrush of The Gelt Gang as they ran in from the living room where they were watching the black & Gold-clad Pirates on TV answered that CANundrum! Nose had a honey-like malty sweetness with a slight pine presence. Mmm. Mouthfeel was medium-to-full, not quite creamy, but on the approach. The taste had a pronounced earthy maltiness, like buckwheat pancakes, with a light piney bitterness. It reminded me very much of an early imported English IPA, perhaps McEwan's (?) that I drank & felt disappointed. It was then that I had an epiphany that AmeriCAN IPAs are MUCH more hoppy & bitter than their original ancestors. This beer was much like that, sans disappointment. In fact, I would have been disappointed if it had been super hoppy. This is one that I would like to find on hand-pump when I head out to Long Island in late-July. Finish was semi-dry & a nice palate cleanser, but one was good. I look forward to more of their beers as a result!

Had on tap at UrbanSpace at the Vanderbilt New York, NY

Draught: This one pours a hazy amber color. There was a bit of an off-white head that leaves some lacing. Nose is malts, earthy, some nuttiness. The taste is good. Some bitterness. Malts, earthy hops, a touch of nuttiness. Decent!

Pours a semi clear amber color. Nice moderate lathery head, good retention, yields a creamy film and rings of frothy lacing.
A rich malt aroma, nutty, biscuity, and graham cracker also emits a fruity sweetness. It is redolent of berries and orange marmalade. A touch of floral hops is also present.
Malt forward but balanced. The malt profile is nutty, dry, and a moderate sweetness. The sweetness is fruity, jam like and with a hint of apples. In contrast, the finish has an earthy bitterness that is quite bold, and evokes grass, bark and tobacco.
Medium bodied, smooth, even creamy. Carbonation is gentle.
A pleasant English Pale Ale.

Pretty simple but good beer - good English hop profile, malt is balanced, something easy to drink that delivers on some classic flavors without muddying the waters

Can with BB date of 3/18/18 so this is relatively fresh. Pours a gold/copper color with a tan head. Smell is dominantly dark bread and caramel. Taste is a strong tea and dark bread combo. Throw in some spice, caramel malts, toffee, and butterscotch. Mouthfeel is medium to light and finishes dry. Excellent beer for the style. Will buy again.