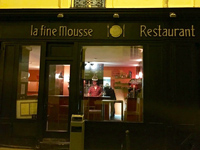 View: Place Reviews
Reviews: 19 | Ratings: 36 | Log in to view all ratings and sort
Reviews by Jeffo:

Went to this place on a recent trip to Paris. Thanks for the recommendation Tommy!

Very nicely decorated place that is refreshingly modern. Most beer bars, especially in Belgium and Holland, try to look old and "authentic," but this place is rather different in that regard. There isn't a whole lot of room inside, so it can get rather crowded, especially on weekends and when the weather doesn't invite you to stand outside. Get there earlier if you want to have a place to sit.

Lots of good beer here. It's heavily weighted towards French craft beer, which is why I came, and there is a wide variety of styles. I had a dark mild, a couple IPA's, as well as a Brooklyn Brewery porter that was on tap. That was interesting to see. The 20 line draft list is mostly all French, though there are some imported Dutch, Belgian, Scandinavian American stuff in bottles as well. Nothing overly special on the bottle list, and some of them were comically expensive as well, so I stuck to the draft list. There was enough fun, local stuff there as it was. In any case, it's safe to say that this is the best stocked bar in Paris, though it would obviously fall short of some of the world's best.

Service is fine. It's European, so be patient if the bartender seems to "walk right past" you a couple times. He'll get there. There is also no service at the tables, so you'll have to line up at the bar like everyone else if you want a drink. No problems here. Chat up some local beer geeks or visiting fans while you wait.

No meals here or anything, but there is a cheese platter that comes with a nice assortment of treats. Quite a few people were ordering these, so we gave it a try as well and it didn't disappoint. Well worth checking out if it works for you, but expect to get your main food fill elsewhere.

A really cool bar that my wife and I enjoyed very much. We enjoyed it so much that we decided to skip dinner, eat a platter, and just get a big mac across the street on our way home. Not a must see if you're on a beercation or whatever, as there's nothing here that is on the hard core ticker's list, but if you're in Paris, you should definitely make it a point to visit La Fine Mousse. Cheers!

Visited with my wife during our honeymoon trip to London and Paris.

Beers ranged from very good to outstanding. Also had an amazing meal that consisted of The Bonite (appetizer), The Cuissot de cerf (main), and The Chocolat manjari de Madagascar (dessert). Table service was great as we never had to wait long for food or drinks to arrive. Really liked the intimate atmosphere as well. Our overall experience was excellent, and we would certainly come back.

Great spot in quiet area in the back of a Paris neighborhood.

Many people hanging outside in the cobblestone streets enjoying their beers.

Nice bar with a large selection of all craft taps. Many are from France and the surrounding European countries. A few American selections on tap on my trip including Prairie BA Bible Belt. I went for a few local hoppy options.

Also has a large bottle menu which included many lambics including Cantillon and 3F. We shared a bottle of Iris and St. Gilloise. Both served in a lambic basket and expertly decanted into 4 branded teku classes.

We spoke minimal French and were able to interact with the bartender and clientele easily.

Overall a great place to grab some beers in Paris, especially if you are looking to get away from some of the rowdier districts.

Small bar with enormous beer selection. We arrived at the end of their 5th anniversary party but were warmly welcomed and promptly served. Staff very knowledgeable and helpful in describing their beers. Next time I go I'll bring beers to share

Cool bar in a quiet ‘hood of Paris. They have two locales, one is the bar (with 20 taps) and across the street is the restaurant (6 taps and 42 bottles). We visited the bar and it is cozy but tiny so it got packed fast.

Friendly service, English spoken and what’s best about la Mousse- they serve beer from France mostly, with a bunch of Belgians as well (Gueuze Tilquin). And make no mistake, there is no Kronenbourg 1662 here! All craft, all the time.

The restaurant makes the food and you can order it at the bar, although I would recommend going to the resto because it will be less busy and you can still get beers from the bar. They also have different taps, and bottles from France, Belgique, Denmark, Lancelot XII, USA (Karl Strauss). Small menu of small plates like veal tartare, salmon tataki, cheese… will try next time.

It wasn't a sunny afternoon the day I went to La Fine Mousse but it was filled with people having their beers at the counter. The number of taps could easily reach 15 or 20. The selection, not being the best I've ever seen, was good enough to have a Cantillon which enabled me to have a real sour beer for the first time. Service was impeccable.

Great vibe, classic tight Parisien space. Fantastic service from the staff who really knew the menu in and out. Selection is great - I was able to try multiple French beers. They were also heavy on Italian beers and had a strong presence of Belgian beers. The vintage cantillon was a cherry on top. Great food at the restaurant - good for Paris, exceptional for beer bars. Highly recommended.

It's easy to fixate on the selection of lambics, which makes this a worthwhile destination. The service is great too and the people are very nice. The draft selection is very localized. This is not necessarily a bad thing. It is also reasonably priced. I am a huge fan of this bar.

Good place to stop by while in Paris, but I didn't have the best service (yet very typical of my visit to Paris). Nice beer selection!

Small bar on a quiet side street in Paris with tons of character. 20 beers on tap when I visited in August 2015, with a nice representation of French and other European Brewers, plus a beer from one of my favorite American breweries (Prairie).

The staff were very friendly and accommodating of my terrible French. They even helped me get connected to wifi so that I could write this review. I would definitely visit again.

Great little beer bar in a very local neighborhood. The draft selections are great, and they have many local beers to choose from. The staff was friendly and knowledgeable. A great spot to grab a beer and relax.

My wife plans our vacations assiduously, particular scouting out gems like this one. Great vibe, interesting selection of beer, and superior glassware. When we were there the draft list included Machete DIPA from Del Ducato, Hemel & Aarde IRS from De Molen, and Hel & Verdoemenis IRS from De Molen as well. Highly recommend!