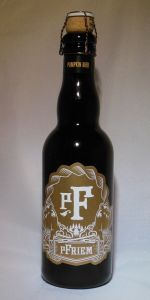 A: cloudy straw with a thick stable head.
S:Ginger, yeast, bread, and definite squash
T: follows smell. Bready and yeasty with sweet squash lingering after the finish.
M: spritzy and pallette filling.
O: great pumpkin beer, and a different style for the squash

i have drank less pumpkin beer than ever this fall so far it seems, which might be why this tasted so good to me. its also pfriem, and everything they make is awesome, so that has something to do with it as well of course, but this is remarkably good, and even unique in a style that tends to be samey. i think its really subtle on the usual notes, which allows a lot of the nuance and mellow complexity to be appreciated, this is expertly built, but those looking for a fall spice bomb should search elsewhere. this has a gorgeous deep orange color, immaculate clarity, and a head on it that makes it look like a belgian beer in the glass. the aroma is awesome too, i dont get a ton of actual squash on it, but the roasted, cooked sort of vegetal element is there, with a nice rich supporting malt cast, almost belgian dubbel-esque to me, that chateau sort of rich grain, sweet too, but not overly so. hints of vanilla, toffee, rum, cinnamon, nutmeg, and anise are here too giving it a fall vibe, but these are mild and i think the grain speaks as loudly as anything else does in here, which is a rarity in this style. its almost overly subtle in aroma and flavor, delicate for a malty beer, so clean though, and the layers really come out as it warms. the pumpkin itself is a little tricky to appreciate, but i know what its doing here, and its contribution is sort of out of the spotlight. great carbonation, a lively, almost fancy feel to it, and just overwhelmingly satisfying at the end of each drag i take off of it. this is adult level pumpkin beer, one of the most evolved ive had, and a new standard for me by which others will be measured...

Pours just about a finger of white head into my tulip glass. The head looks somewhat soapy, and I can hear it fizzing pretty quickly. Within a minute, it's gone. The body is a somewhat hazy, golden orange. Medium amount of bubbles coming up. Overall it looks sub par.

The nose is that of a pretty classic pumpkin beer - graham cracker, nutmeg, pumpkin. Aroma is on the lighter side, in the sense that I don't expect this to be a heavy beer, it smells refreshing, and not too sweet. But make no mistake the aromas are there. I’m picking up some fruity Belgian-esque esters here, kinda an interesting addition. Kinda hard to grade pumpkin beers sometimes, because they are all somewhat similar. However, this light feel, and unique ester character pushes this above average. Good nose.

Hmm, the flavor is ok. Very mineraly on the first sip. I definitely get those esters up front, which tastes fine, but if that's all that's here, it's not really what I'm looking for. There is a little bit of authentic pumpkin mixed in, which lingers for a while. Not too much in the way of nutmeg or graham cracker. It tastes fine, but it is almost overpowered by this mineralistic character. In addition, it simply doesn't taste too much like a pumpkin beer. Overall, ok.

The mouthfeel is quite surprising. The amount of carbonation here is astounding, coupled with the overall mineral feel - it makes it hard to put down at times. I feel like I can handle my fair share of carbonation, but this is crazy high. The body is not watery, but certainly on the thinner side, it's not really the problem here though. Overall, the feel could use a decent amount of work.

The drinkability is pretty high, but honestly it us damaged by the mouthfeel. It's not hard to drink because it's un enjoyable, it's just physically hard to drink.

Overall this is a little bit of a let down. What I was hoping would be a light, sessionable pumpkin turned into a carbonation bomb, with some questionable flavors. Not bad by any means, and I wont have trouble drinking it, but certainly a head scratcher in many areas.

The appearance turned out much the way I thought it would - sub par. The head was not really existent here, nor was there any lacing to speak of. I did get a little bit of bubbles resting on top of the body, just to remind me it's a beer. For that reason it will barely land above the 3 grading mark.

Pale golden amber with a modest foam in the Orval chalice. At first sip this is faintly squashy and quite spritzy. But the aroma of clove and cinnamon come through, along with some vanilla. The flavor is very subtle with the light malt and a hint of carrot cake.

Pleasant touch of sweetness with the very dry Belgian yeasty finish. Quite sippable, though for the price it's a one-time indulgence. Still, it's an above average pumpkin brew and yet another in the string of winners for pFriem. From the teeny corked bottle purchased at Garden Path Fermentation in Wash.

Pours a somewhat muddled looking, slightly lighter than copper orange. It has a decent white head with some retention and minimal lacing.

This smells all Belgian Christmas ale to me. Clove, vanilla, bread in both aroma and flavor.

The feel is on the thinner side, and well carbonated. Balanced, but the spices confuse it towards slightly bitter.

I like the idea of a Belgian style pumpkin bier, deliberate or not. I'm still not a fan of pumpkin beers, but this one at leads heads in the right direction for me. Cheers!

Sent as an extra in a trade. Bottled on 10/19/15 poured into a snifter. Pours clear yellow with a nice orange hue. Two fingers of head that quickly dissipate. Appears more clear than most pumpkin beers. Smells heavily of Belgian farmhouse yeast with a touch of pumpkin. This bottle is 3 months old so clearly the adjuncts are fading. Hints of clove, vanilla, nutmeg and ginger linger on the back end. There's a strong malt backbone. Overall this is a fair beer. I would like to have drank it fresher when the adjuncts are more dominant but if you enjoy Belgian farmhouse beers with pumpkin and fall flavors that are not heavily dominant you would probably enjoy this.

This is closer to a Belgian farmhouse ale, or maybe even a tripel. The yeast, aromas, spiciness, mouthfeel and body are all in the farmhouse ale neighborhood. The pumpkin is definitely there, but it's just one component of the overall beer, and doesn't dominate the flavor, like most pumpkin ales. The usual pumpkin pie spices (cinnamon, allspice, nutmeg) are either missing or lightly present. Think of it as Belgian ale with a pumpkin difference.

Whatever the style, it's a delicious beer.

Poured into a Fremont small snifter. Pours a hazy orange amber with gold tint and a half finger off-white head with great retention and lacing. Aroma of pumpkin, Belgian yeast and spicing, bready malt and light stone fruit. Flavor is light stone fruit, mild pumpkin, Belgian with a hint of saison yeast, bready malt; finishes with a light clove and spice bitterness. Medium bodied with active, peppery carbonation. Wow, this is a quite different take on a pumpkin beer and in a very good way. The profile is a cross between Belgian strong pale ale and saison with a nice light pumpkin presence and clove supplemented with other pumpkin pie spieces like cinnamon and allspice, but lightly handled. Lighter and drier than a traditional American pumpkin beer, but very refreshing and with excellent Belgian character. This was very enjoyable and different. Nice to try something quite new that is not odd or challenging.

Had on draft. Super surprised by this one wasn't what I expected. Not a traditional pumpkin beer this is definitely belgian in style. The belgian yeast and the spiciness that comes along is here clove, banana. Pumpkin is there only on the finish along with ginger and a bit of allspice. Slight bitterness, no sweetness, and dry. Super carbonated. Cant get over that farmhouse funk. Would recommend this.