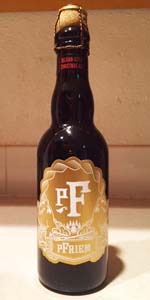 Notes: In Belgium, Old St. Nick delivers a bundle of sticks to those who have behaved badly throughout the year. Just to be safe, we suggest foregoing cookies and leaving Santa a pFriem Belgian Christmas Ale. Brewed with coriander in a rich, Dubbel base, its toffee aromas and hints of fresh, ripe orange will leave a milk-chocolaty velvet coat on Santa’s tongue and guarantee that you won’t be getting sticks this year.

Deep ruby red, with dark undertones, while supporting a thick off-white foam. Toffee aromas dance with fresh ripe orange. Creamy milk chocolate covers the tongue, but is lifted by zesty lemon. Velvet coats the mouth at the finish while saying “so smooth”.

Murky opaque brown with a cream cap and thick spotted lacing. Coriander and pressed flowers incorporate into the orange zest, genera esters, light cocoa, caramel and huge belgian yeast in the nose. Taste adds candi sugar, prune, a touch of dried apricot, with herbal hop kisses, but where the nose kept the flavors distinct, as the taste goes down the glass things start to muddle. Feel has that wonderful belgian yeast softness and estery finish with hop kisses, light, frothy and spiced notes from coriander keep interesting. Best christmas beer of 2020-21 season so far! The wife loved it

Not much of an aroma, a little sweet mustiness.

On tasting, faint tastes of sweet malt, warm booze, and boiled sweets. However the dominant flavor is a lime bitterness from the coriander. And it's a heavy touch to this palate. As the drink goes on, this seems to lessen somewhat in intensity.

12.7oz bottle purchased at Community Pint, in Spokane, Washington, for $6.99. The space set aside on the rear label for a freshness date has been left blank, so it's hard to say just how old this beer is.

Poured into a Belgian-ish glass, this was a dark brown color, taking on a slightly lighter shade of mahogany when held directly up to light. Big, massive, pillow we had. Lots of lace.

Flavor is like a dubbel with an extra amount of coriander added. Sure, there is flavors of dark fruits, such as raisins and figs, and some dark vault flavors such as cocoa and coffee, and a bit of pipe tobacco, but coriander is what jumps out especially.

Relatively full-bodied, with a slightly creamy mouthfeel. It's a little bit too heavy to be mistaken for an authentic Belgian ale, but as American examples of the style go, it's not bad.

This isn't bad, but not as good as I had hoped for. I can't help but think that it might be a bit past its prime, perhaps this is left over from last year's holiday season. With the lack of any date, who knows?

Look: The beer pours translucent. It’s dark brown in the base of the goblet and light brown at the top. Some tiny bubbles streaming up from the bottom. A khaki colored head that’s one solid pillow of foam. It looks like the top of a Guinness. Some lacing as I drink the beer.

Taste: On the tip of tongue there’s some nutty and a hint dark dried fruit sweetness. On the side the sweetness picks up to a more sugary date flavor. The finish has a dry and doughy flavor with moderate ABV warmth and cardamom spice. Some welcomed herbal and burnt sugar bitterness.

Feel: Light on the palate with medium level of carbonation. Dry and slightly warm on the finish.

Overall: This beer is excellent. It’s simple in nature and complex in flavor. Malt and yeast shine, ABV gives a friendly wave hello.

Taste: Caramel, fig and date forward with the spices emerging, particularly coriander and, to a lesser extent, cinnamon and clove; nicely blended flavors in the finish

Overall: An early (or late) Christmas celebration on the tastebuds; enjoyable

Thanks, The_Gingerbeard_man, for the opportunity

Poured from a 500ml bottle into a high sided tulip glass.

Look is a dark brown ruby with a frothy off white head.

Aroma is toffee Belgian dark fruits with a hint of spice.

Taste is a lot lighter than I expected with a light Belgian quad note at the end.

Overall, this is an enjoyable holiday ale. Its appearance is the real highlight. The taste is very subtle with all the elements it delivers. Very nice.

This pours a beautiful and crystal clear ruby red, reminiscent of a red glass ornament lowly lit on the tree. It's large bubbled foamy head is lightly tanned, persistent to the surface, and laces moderately.

Clove, nutmeg, and cinnamon spices mingle and dance around sweet raisons and plum, while an earthy note lingers on.

The blend of spices hit the tongue first, collectively tasting somewhat like cardamom. The citrus spice blend is met by toffee and dark fruits, and banana and esters follow.

A wonderful balance of sweetness and spice is met with a very carbonated and very dry feel. A little alcohol warmth is just right to make it nice and cozy.

pFriem Belgian Style Christmas Ale is a real treat. Like a walk along the edge of a snow dusted town, warmly but dimly lit with festive lights. If I could change one thing, I'd like this to be just a touch more rich, but no complaints here. This will see my refrigerator again in the near future. Cheers!

375ml corked bottle poured into a Corsendonk chalice. Let this beer warm up, do not drink straight out of the fridge.

Pours amber brown with a very thick head which does not dicipate,

Rich and malty dark amber brew with a modest foam in the Affligem chalice. The creamy carbonation is the best feature. Faint honey aroma. The Belgian yeasty dryness emerges at the finish.

It is hard to criticize what would be a sensational brew from a hundred other breweries. pFirem just makes so much excellent beer in every style. This is the November 2016 batch. Poured from the 375 ml bottle after looking for the pliers. I think 500 ml would be a good size for tasting. Not to mention the price of this stuff.

Very enjoyable Christmas ale, purchased in November at Belmont Station in Portland. Pours a very dark amber with an off-white head. Trying several Christmas ales this year. This is one of my favorites.

Awesome beer here. Think belgian dubble but with a wonderful sweetness accompanied by holiday spices. I'm picking up cinnamon, clove, and peppermint with little alcohol present. This is good.

Pours a finger of head on a dark amber body.
The aroma is faint caramel and candy.
The taste is a mild candy sweet with a little caramel.
The texture is soft.
It's okay.

Belgian Christmas Ale from pFriem Family Brewers
Beer rating: 88 out of 100 with 45 ratings