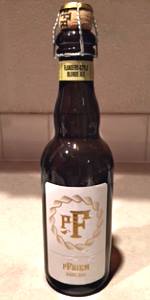 L: pours brilliant gold permeated by streams of bubbles rapidly rising to join a 1" white foam blanket with a good retention and a very fine bead

T: Light funk, lemon and green apple lead the flavors with touches of balsamic, grape, and butter and a hint of vanilla and coconut

F: effervescent with a light to medium light body

This one pours a slightly hazy light yellow, with a small head, and lots of lacing.

I've never heard of a Flanders Blonde. Whatever pFriem might be trying to do with the style, however- I love it. It's a delicious and slightly acidic golden sour, with a yogurty funk bite, lots of white wine, floral funk, oak, and a hint of stone fruit.

This is light bodied, crisp and surprisingly clean, with a high level of drinkability despite the sourness.

This is a fun little beer that clearly shows a lot of care went into brewing it.

A: Wow, is this beautiful! Pours crystal clear bright yellow with tons of bubbles racing to the surface like it's from champagne. An airy light foamy head persists. Lacing is an understatement.

A: Full of sour notes, but well complimented by light touches of earthiness, grape must, and oak.

T: This is difficult to describe. In one word, delicious. Not nearly as puckering as I was expecting. Mild grape, light sweet biscuit malt, oak, tannin, and a touch of floral/spicy/earthy highlights.

F: This is perhaps the best feeling beer I've had next to Ale Apothecary's Sahalie. It's indescribably soft and velvety. It feels like the whole thing is made of liquid foam! A wonderful balance of lightly tart and sweet, little perceivable bitterness, dry finish, and just a hint of its 7.1% abv is noticed.

O: This exceeded my expectations by far and is another example and reassurance that I love pFriem.

Been aging this for almost exactly year, I think that's fine for the style. I’ve had some flanders reds, never a blonde.

Pours about a finger of white head into my tulip glass. The head looks pretty creams, lots of small bubbles. I initially heard it fizzing away, but has since settled down, and retention is good for the moment. The body is a somewhat hazy, golden blonde. This looks fantastic so far.

White wine up front on the nose, vinegar. Banana and clove in the background. Green apple. It smells fantastic, and extremely clean. Not sure how to grade this because I've never had this exact style. I guess the only reason this doesn't get a 5 is because I just want a bigger aroma, because the aroma is so good!

Yeah, damn that's good. Light, but very flavorful. A tad sweet, but it works well. All the flavors hit at once, hard to dissect them, I'm not complaining though. Vinegar hits up front, with that sweetness. Not too much wine, what is there blends well with the vinegar. Finishes with a pretty distinguishable green apple. Maybe a tad bit of clove, not much for that, no banana. A little salty, as would be expected. Super crushable, fantastic flavor.

The drinkability is through the roof. Tastes great, and it super drinkable.

Overall not much more to say, a great tasting, super clean beer, with no downsides.

The appearance finished much as it started, very good. Retention was very very impressive on this guy, I had close to a finger of head for at least 15 minutes, with a nice film lasting the entire way down. Lacing was odd, but good. A little spotty, but nice and thick, and definitely there. Awesome looking beer.

never heard the term flanders blonde before, which is pretty cool, and in a world of increasingly similar sour beers, this is definitely a welcome something different! love what these guys do, and this is some of their best work for sure. it has a tall white head on a clearish pale body, looks pretty and alive, but also simple and clean. aroma is intense, almost perfumey citrus, lime zest driven, with some oak on it, a lemongrass type sour and herbal pucker, very concentrated, loosely wheaty, and plenty funky from mature brett, lots going on here and very interesting. it makes the mouth water, and its also refreshing, it like, creates and satisfies an urge at the same instant. the flavor shows a strong white wine character up front, followed by an herbal and oaky freshness, plenty of funk, and more sour than their others i have had, lots of clean sharp bright acid towards the finish, and a just a bit of the cereal malt coming though and beefing it up. love the white grape notes here, subtle apricot, and vanilla from the wood. expert carbonation and a neat richness to the feel. majorly impressed with this beer, real unique wild aspects, and extremely intriguing. id love to know a little more about it, one of my favorites to date from these legends!

Beautiful appearance - rocky head with amazing longevity. The aroma is excellent - granny smith apples, grapes, a bit of oak, very wine like. The taste follows, no real funk to speak of, a sharpness that is vinegar-like. This strikes me as a beer that would be an incredible component in a blend, but suffers a bit on its own from lack of complexity in flavor. A very promising start to the sour program for Pfriem.

Wow! Dave brought this from OR to KY for me, and I've kept it in my fridge for 10 months.

Taste is a blend of sour and sweet. Ripe peaches and green grapes. Vinous, oaky.

Thanks to Joe for sharing the OR beers!
Dark brassy orange, spotty flecks of seafoam lacing, lasting surface skim.
Aroma is acidic, lightly acetic, clover honey, oaky vanilla.
Fresh sawn oak, buttery oak like a white wine, ironically from a Pinot barrel.
Medium bodied with a light slickness. Nicely oaky with a light stonefruit presence, kind of a buttery feel. Overall interesting and worth a try.

Taste is rich up front with a super tart finish. Again with the unripe apple flavor and the grapes. Nice.

Mouthfeel is creamy and nice. To a certain extent it reminds me of the mouthfeel I associate with Cantillon. Overall, this is a nice, tasty beer.

Poured into a Gavroche tulip. Pours a hazy, medium golden amber with big three finger white head with good retention and thick lacing. Aroma of mild caramel malt, tart orange citrus, mild tropical fruit, green apple, lightly vinous. Flavor is green apple, orange family citrus, hints of vinegar, wild yeast, oak and hints of vanilla. Finish is tart with an acidic sharpness. Nice peppery carbonation mouth feel. A lot of interesting flavors here, but a bit too tart for my taste; although it is not out of character for a Flanders style, similar to a Flanders red in sourness level. There is an odd astringency in the finish that was a little jarring after the full fruit flavors of the taste. Nicely made and interesting enough that it could win me over to the sour side.

June 13, 2018 update: Tasting it again, bottled on 03-19-18. I would rate it much higher, for being a great example of an American wild ale done right. The aroma is both fruity and acidic, rather than the dreaded acetic vinegar smell. Flavor is more like a sharp white wine with that zingy apricot and pineapple aroma. Great to sip. It's just that it's nine bucks for the teeny bottle, but I'd rather pay pFriem for at least expanding our horizons rather than lactobacillicizing them.

Slightly hazy golden color with a low white foam in the tall Timmermans goblet. Acidic smell with some fermenting pineapple and some old socks in the nose. More carbonated on the tongue than a lot of sour brews, which I like.

Overall this is definitely on the tart side, but not seriously sour. It should please the sour enthusiast, however. Light and foamy mouthfeel. There is a distinct taste of malt vinegar. Tangy dry fruit is quite interesting. Some tart tangerine, pineapple, and passionfruit. From the 375 ml corked bottle purchased at a supermarket in Portland.

Flanders Blonde from pFriem Family Brewers
Beer rating: 92 out of 100 with 66 ratings