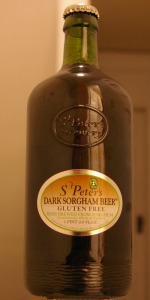 S: smells like sorghum, brown sugar, citrus, fresh jam, with a hint of chocolate and a mild earthiness

T: The dark sorghum gives the beer light brown ale flavors with chocolate and some brown sugar which soften some of the sorghum's harshness and increase the beer's drinkability

F: The body is medium light to medium and the carbonation is medium.

From the bottle: "Beer brewed from Sorghum (contains no wheat or barley)"; "Suffolk grown, Sovereign bittering hops provide the floral notes for this full bodied beer, which is Gluten free and suitable for coeliacs. Brewed with skill and patience on one of Britain's finest malt breweries."; "St. Peter's Brewery is located in a medieval hall in a remote and beautiful corner of Suffolk. Our oval bottle is a faithful copy of one produced c. 1770. The original is kept at St. Peter's Hall."

I heard a small hissing noise as I began to prise the cap off of the bottle, but as soon as I actually Pop!ped it open, I began to get foaming coming up through the neck! Drastic action was called for & so I began a pour into the awaiting glass to keep things moderately under control. The result was three-plus fingers of dense, rocky, tawny head with the most unrelenting retention that I have experienced in quite some time. Color was Coppery-Brown (SRM = > 17, < 22) with NE-plus quality clarity. Nose had the usual sorghum sharpness, like cheddar cheese and treacle, commingled. I am not trying to be funny, mean or condescending. I realize that I am not the intended audience for these types of beers, but I also need to call a spade a spade when reviewing them. Mouthfeel was thin-to-medium, not watery, but not much beyond. The taste was not as sharp as the nose had led me to gird myself for. It had a definite treacle and anise-like bitterness, but it did not have the cheesy sharpness that I have experienced in some gluten-free beers. It was, dare I say it, palatable. The taste was somehow tea-like and in total, the beer had a mellow, calming quality. Finish was semi-dry, but very unusual. The flavors just seemed to linger endlessly past the swallow and I remained thankful that they were palatable.

2.74/5  rDev -18.7%
look: 3 | smell: 2.75 | taste: 2.75 | feel: 3 | overall: 2.5
A: The beer is crystal clear copper in color and has a light amount of visible carbonation. It poured with a quarter finger high off white head consisting of large bubbles that died down, leaving some patches of bubbles on the surface and a collar around the edge of the glass.
S: Light to moderate aromas of sorghum are present in the nose; slight hints of molasses-like sweetness become perceptible as the beer warms up.
T: Similar to the smell, the taste has flavors of sorghum—somewhat resembling cooked vegetables with bits of molasses—and faint hints of floral hops, along with a light amount of bitterness.
M: It feels light- to medium-bodied on the palate and has a moderate amount of carbonation. The hops seem to contribute a light amount of crispness to the mouthfeel.
O: This beer seems to have a little more in the way of molasses flavors compared to some of the other sorghum-based beers, but still has a taste that is mostly astringent.

Pours dark, but not cloudy, with very little head and very little carbonation. Smell is quite mild, a tad bit chocolatey, something very vaguely plummy. Doesn't smell bad, just doesn't have much smell.

Taste is sweet up front and then a roasty, vegetal bitterness after (full disclosure, I couldn't tell you what sorghum tastes like). Maybe some unfamiliar hop characteristics (not much of an English ale guy -- this is pretty far out of my wheelhouse), definitely some burnt caramel. I'm finding myself unexpectedly liking it.

Mouthfeel is a little flat, a little slick, but not to thick and not too thin. Overall, I don't love it, but it's not too bad.