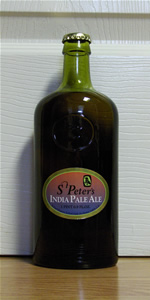 Notes: This ale is traditionally highly hopped and robust to survive the long voyage to the Indian sub-continent. The result is a full-bodied Pale Ale with a zesty character. Dark golden in colour, pleasing toffee aromas, and distinctive floral citrus flavours.
View: Beers
Reviews: 208 | Ratings: 351 | Log in to view all ratings and sort
Reviews by captaincoffee:

5.5% ABV according to my bottle. Pours crystal clear and golden with a weak head and no lacing. Smell is grassy, hay, slightly medicinal, and some off note I can't quite place. Taste is like a below average bitter with some extra hops. Slightly watery mouthfeel. Slightly unpleasant aftertaste.

a lot better than i expected . smooth and rich for this style

A- copper colored and a loose but white foam. Foam doesn't stay for long and it has little as no bubbles...

T- Bitter and has a little sweetness

D- Sweet and bitter at the same time, nothing special.

A 500ml bottle with a BB of Dec 2011. ABV is stated as 5.5%. The olive green bottle has an antique design, but is round rather than oval. A beer to celebrate IPA day!

Poured into a Sam Smith's glass. A rich golden-amber colour with low carbonation and good clarity. Yields a large off-white head of creamy foam that lasts for a couple of minutes before subsiding. Aroma of stewed hops/leaves with a backbone of caramel malt and a hint of ethanol and diacetyl.

Tastes of slightly sweet malt with a dry bitter finish. Notes of stewed hops, caramel/toffee and some buttery diacetyl in the background. Also a hint of alcohol/solvent. Hops are pleasantly bitter, but not aromatic. Mouthfeel is smooth, slick and tingly. Quite astringent. Aftertaste of bitter stewed hops.

A pretty good IPA in keeping with the English style, and nicely balanced. I wish it had more aromatic hops to round out the bitterness. The diacetyl is palatable but a bit of a flaw. Worth trying, but I reckon there are better examples out there.

This is the third beer I've tried from St. Peter's. I've been meaning to pick this up and try it for a few weeks now on my friend's recommendation. There are so many American IPA's out there that are super-hopped compared to their original English counterparts. My friend told me that this St. Peter's India Pale Ale is as close as I'd probably get to a true English IPA this side of the pond.

Appearance: Clear, deep copper brown, light, large-bubbled foam on top that dissipated quickly to a thin line on top. Very, very slight lacing that stuck for a few minutes on the side as I drank down through the bottle. Before even trying, I could see that this was not light-struck and skunked. The smell and flavor confirmed this impression.

Taste: When it first hit my palate, there was a malt profile of creamy toffee and a hint of apple and agave. Then on to grassy hops and a finish of herbal hops that persisted a minute after swallowing.

Drinkability: I could drink this all night. The balance of malt to hops is much more even compared to American IPA counterparts. This is definitely a beer on my list of "I wish I could try this on nitro!" beers. I drank this while eating homemade curried lentils. It was a fantastic pairing!

After reading reviews, I gathered that this one is more of what an ESB should be, rather than anything Americans have become accustomed to identifying as an IPA. I also gathered that the hops and sweetness were out of whack, but I jumped at the chance to try a session beer that is uncompromisingly classic British.

I didn't make my purchase expecting to be blown away. It was more about the experience of experiencing something different. Maybe it's not sooo "different", but I have been blown away!

A- poured into a La Trappe goblet is appears a deep and glowing amber nearly transparent. The depth suggests a malty beer, but it moves fairly freely. It's capped by a cloud of froth. Very appetizing.

A- Here's a two for one. It begins smelling the way the roses I just bought for my mother OUGHT to smell. Very floral, to the point of passing for perfume. As the beer warms, and the flavors settle, a toasted bread aroma prevails. The scent of buttered fresh bread floods the nose, and then a hint of mustiness creeps in to give the scent extra life. Some esters associated with English ales peek through, as well.
In some ways this beer smells like a Trippel before the yeast sting.

T- Juicy as much as malty. Far, far more like an American Pale Ale than the standard English Bitter. The hops are biting, but not offensive. The malt flavor will emerge as the beer rises towards room temperature, but never achieves the chewiness of German Lagers. The hops are too familiar, so I suspect the English varietals have influenced American breeds that much, or some American hops were utilized. Bitterness spikes in the finish, but the beer remains very well put together. I have had American Pale Ales that were stronger, but far flabbier.

The malt balance of this beer is exemplary of perfection. Hops are showcased (without violating any sense of acceptability), but the malt holds more status than merely a serving as a vehicle for featuring hop decadence. The malt is enjoyable, and as the beer drinks, the malt's aroma, mouthfeel and aroma don't simply hold the beer together, they cause it to standout.

M- Fullness: this beer's hallmark character. For all the flavor and relatively insubstantial ABV, this beer manages to provide a body that carries the depth of flavor and finish dry. It's similar to the consummate Lager.

O- I feel this beer's labeling does it more injustice than the marketing manager could have ever perceived. Perhaps most grab this off the shelf expecting an irregularity. They hope it'll be a relic of the past, or an answer to check a dominating trend. It's not that at all and it doesn't have to be. It's unfortunate if many were left disappointed after hopes were dashed. But for those who pick this beer open to whatever it might hold as a beer, they will be very pleased. It's easy drinking, and profoundly enjoyable.
It remains session strength and doesn't threaten to incapacitate the palate. It's just enough, and for that it leaves me wanting more, more, more!

I should add: I first became aware of St. Peter's when I saw their Porter... at the time I was drinking a lot of Belgian Strong Pale Ales and Tripples. In that light, the porter was roasty, full-bodied and sweet. Since then, I've found it think and nearly insipid. I don't dislike it, but I prefer fuller-bodied examples of the style. That demonstrates how relative tastes can be.
St. Peter's IPA has far exceeded their other products, in my book. I count this, now, among my favorite beers.

A: Off white head, light brown color, clear and has average lacing.

S: Off putting. Not fruity like American IPAs. I assume there are mainly German hops in here.

T: Suprisingly great. Malty more than hoppy. Hop flavors are almost nonexistent. Not the norm for the IPAs I drink. Low hop bitters means this could be a easy drinker though. Crisp and clean finish. Good beer but not really IPA in flavor.

D: Very easy to drink. Could be sessionable since it won't overwhelm one's palate.

S-smells like way to much caramel with maybe a hint of honey. no hops.

T-sort of a grassy hop flavor, and bitterness with a ton of malt, cant really describe.

O-not that good. Don't like the hop, or malt flavor to this one.

T ~ Dirty rags, grainy malt, & dishwater at first sip. Yuck. Let open up for a few minutes to see if it would improve. Dry leaf, sweet dough, & a touch of peat. Hops are grassy & skunky. Not a good thing.

M ~ Mouthfeel was very dirty & gritty for a while. At near room temp more balance came into play.

D ~ This was very hard to drink until it warmed up substantially. I am a big fan of EIPAs, but Will definitely not revisit. I'm definitely thinking I got a lightstruck bottle...but why take the chance?

Smells of sweet hops, a hint of darker malts and some skunk.

Sweetish up front, some raisin, breadcrusty malts and a bitterness from British hops. Interesting. A more hoppy bitter.

Poured from a 500ml bottle into a tulip glass, unknown bottled date. This pours a slightly hazy brownish color with a smaller med lived head which leaves a lacing. There is a little green bottle skunk, rubbery smell, lots of malt, little hops. The feel is medium. The taste is okay, you have the skunk funk, some weird bitterness, but not quality hop bitterness followed by some malts.

Poured from a 16.9oz bottle into a Tennent's pint

Appearance: a golden yellow color with a large white head that faded rather fast and left little lacing.

Smells: has a subtle hop aroma that has hints of flowers.

Tastes: this ale is kind of strange tasting. I don't know if I am not accustomed to it but it has a pungent bitter hop note character that is sort of medicine like.

Mouthfeel: the aftertaste of this brew lingered and it wasn't the best. It has little carbonation that leads me to believe that it was expired or past best by date.

Overall: I bought this one because I have never tried it before and the bottle was quite intriguing, but I will pass up on their IPA again. I will try the other ones I saw like the cream stout from St. Peter's brewery in hopes that I like them more.

Real big peppery flavours, real bitterness. Deeply hoppy without the slightest taste of grapefruit, not much in the way of citrus either yet zesty, very yeasty in some ways.

Easy going though a lightly more lively with the fizz than expected.

Big flavours and enjoyment, give it a whirl.