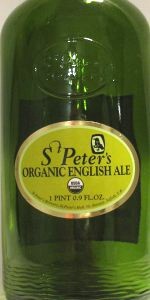 Notes:
View: Beers
Reviews: 45 | Ratings: 153 | Log in to view all ratings and sort
Reviews by thehyperduck:

This review was originally submitted in summer 2012 under the 'St. Peter's English Ale' entry, a mistake on my part that has been deleted and moved here.

500 mL bottle from the LCBO; production code A1612 (guessing that means January 16th of this year, but I'm really not sure). Nice bottle, but does it really need to be green?

Pours a translucent pale amber-blonde colour, topped with roughly one finger of frothy, creamy off-white head. Retention isn't great, but there is some very nice lacing left behind. The aroma is skunky at first, but this problem is mostly solved with a few minutes of airing out. Doing so helps reveal the true aroma of biscuity malts, honey, and some fruity esters reminiscent of apples and pears, all of which is supported with a background of leafy English hop aromas.

This is a pretty tasty EPA, and its flavour covers most of the major traits I like in the style. The flavour is dominated by malts at first, reminding me of lightly-toasted buttered biscuits with a hint of honey and toffee. This is balanced nicely with some potent floral, earthy English hop bitterness, adding a slightly tea-leafy feel to the brew that lingers into the dry finish. Slick, buttery mouthfeel, with a body on the light side of medium. Relatively light carbonation that gently prickles the tongue as you sip, and very drinkable.

St. Peter's Organic English Ale could easily be improved by just switching to a brown bottle, but it's still a solid quaff even with the skunkiness. Fairly well-balanced, very smooth mouthfeel with lots of English-style hoppiness, which is 90% of what I want from an EPA.

I picked up another bottle on Dec. 19 2013, this time comparing it side-by-side with Spitfire, Fuller's London Pride and Pedigree. The toasted malts allow this one to stand out from the pack - this is a superbly well-balanced, sessionable English ale with no serious weaknesses. It's a little too pricy to be something I'd drink regularly, but that has nothing to do with the beer itself. All English ale fans should give this one a shot.

S: Malted barley and sweet with corn aromas and a nice English smell to it.

T: This has a nice sort of herbal taste to it with barley malt finish. A touch of celery and marjoram. Tastes almost exactly like English Ale wort smells. Clean taste with a sedimentary finish.

M: Clean, a touch creamy, with a slightly gritty finish.

D: Sessionable in feel and abv, but the flavor is not enough to make you want too much more. You know what you've had once you've had it, and you're ready to move on.

A good solid yellow gold and absolutely crystal clear body is presented off the pour. Up top sits a shocking white head of about two fingers. Tiny slow crawling bubbles rise. I am kind of surprised by how incredibly clear this is. Some good stickiness on the glass.

Smells like an adjunct lager at first then gives way to minor toasty like malts, but also some old doughy like bread. Not particularly bitter or hoppy either. Kind of small nose also.

Taste is, kind of hop lemon bitter sensation with good baking cracker like bread at the end. Texture hints at crispness with a solid medium body. Finish also has grapefruit oil like qualities and flavor.

Overall kind of reminds me of an English bitter in a way but definitely more crisp and full. One to enjoy no problem.

Poured into a perfect pint. Cool old-timey medicine bottle that is unfortunately green.

3.0 A: Lightly hazed light orange color. Not quite one finger of frothy white head. Retention is about average and a very short ring of lacing is left.

3.5 S: Earthy and minerally with a dry crackery and grainy maltiness. Little bit of toastiness. Grassy and earthy hops. Mild yeastiness. Pretty standard for the style, which is good enough for me.

From the antique looking green 25 oz. bottle labeled Organic English Ale with the number 10035 on the back label. Sampled on June 30, 2013.

The pour is golden amber with a foamy off-white head and a slight cloudy appearance. I think it looks quite good.

The aroma is very malt forward with butter and cream, yeast, and a slight herbal quality. Hops are soft.

The body is light to medium but quite creamy.

The taste has a malty beginning but a slightly lingering hop finish that becomes rather dry. It reminds more of German malts than English but it is refreshing enough.

St. Peter’s Organic English Ale has an extraordinarily thick, spongy, off-white head, with little brown specks sprinkled about and thick, heavy lacing left behind on the glass. The appearance is murky golden, with suspended brown flecks and lots of bubble streams. Aroma is sharp, with a moldy, cellared smell and some bready sweetness. Taste is of sweet, bready malt, sharp, grassy hops bitterness, nut shell, sugar, and cellar. Mouthfeel is medium and slick, and St. Peter’s Organic English Ale finishes dry, decently refreshing, and nicely drinkable, yet not particularly quaff-able. Overall, this is an interesting and flavorful ale, and I suggest giving it a go.

Taste: muddled with an herbal bitterness

Overall: gets alcohol into the body

Pours a thin head on a hazy straw body.
The aroma is honey suckle and light grains.
The taste is a mild play between honey sweet and pine bitterness. Nice.
The texture is crisp.
Really enjoyable.

Pours a very light orange color with a one finger white head.

Smells like saltines with an astringent burst of hops. There is a bit of the skunk on there, but it dissipates after a few minutes.

Biscuity on the palate, hops are crisp and really balance well with the bread flavors on the front. A by the book English Pale Ale.

This pours out as a orange colored liquid with a very minimal head. The smell is a little grassy with some decent malt and hop aromas. The taste is a lot like a pilsner but I found it to be pretty good despite the grassy flavor. The mouthfeel is medium bodied and not too carbonated. Overall It's a pretty good ale.

16.9 oz bottle was poured into a pint glass.

Taste: grassy hops, bready and pale malts, and some lingering bitterness in the end.

Overall: Pretty nice EPA here folks. Not crazy about beer that comes in strange green shaped bottles, but this one was alright.

Pours a hazy honey orange with a foamy bone head that settles to a partial film on top of the beer. Small swaths of lace form around the glass on the drink down. Smell is of malt, earth, tea, fruit, and slight skunk aromas. Taste is much the same with grain, fruit, tea, and grass flavors on the finish. There is a mild amount of hop bitterness on the palate with each sip. This beer has a lower level of carbonation with a slightly crisp mouthfeel. Overall, this is a pretty good beer with solid flavors, but the smell has some skunk aroma that dissipate somewhat as the beer warms up.

T: flavor is as should, this beer is according to the style, hops, something like honey or maybe some butter is inside but tastes very nice and natural.

M: sensation is nice, start somehow neutral and changes over time in mouth to a final bitter ending, body is a little bellow medium making this beer well balanced between refreshing and fully flavored.