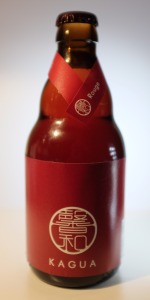 3.92/5  rDev +0.8%
look: 4 | smell: 3.75 | taste: 4 | feel: 3.75 | overall: 4
A really unique and worth experiencing beer. Billed as a dark strong ale, it is amber in the glass and does have that medium bodied feel you'd expect from a scotch ale or strong ale. This one though, is a distinctive Brussels meets Tokyo mash-up. Dark fruit flavor duets with spices you can't find on Belgian soil--these flavors come from Japanese yuzu and sansho peppers. Overall, this beer leans Belgian, with an Asian twist.
Aug 15, 2022
Rated: 3.93 by Stofko1992 from Pennsylvania

Reviewed by SevenBeersDaily from Finland

3.25/5  rDev -16.5%
look: 4.5 | smell: 4.5 | taste: 2.5 | feel: 3 | overall: 3
The sansho pepper is too prominent, and really doesn't belong in a beer in the first place. Mind you I enjoy beers laced with peppers, but not this one. It tastes like grapefruit and green bell pepper with some Belgian nutty notes thrown in. I'd say this is a case of trying to hard to be different rather than just focusing on making a great beer. It's a novelty for those who want something weird, and that's about it.
Jul 10, 2021
Rated: 4.39 by The_Kriek_Freak from Pennsylvania

Reviewed by hk117 from Hong Kong

4.14/5  rDev +6.4%
look: 4.25 | smell: 4 | taste: 4.25 | feel: 4.25 | overall: 4
330ml bottle - sweet, malty and almost toffee flavor at first, followed by a dry and lightly hoppy finish. The sansho pepper notes will hit you towards the end, leaving your tongue a little bit tingly and numb. Extremely unique and just interesting. Only complaint is the relatively weak aroma, which could have taken this beer to the next level. Can imagine this being a great pairing with unagi.
Aug 10, 2020
Rated: 4.55 by Wrenchymonkey

3.8/5  rDev -2.3%
look: 4 | smell: 4 | taste: 3.5 | feel: 4 | overall: 4
This is one I had a while ago, intrigued by the addition of Sanshō (aka Japanese pepper) – an ingredient I was wholly unaware of until I tried this beer (an enlightening minute of Wikipedia later and I’m buffed with information on this curious spice). I’m a big fan of craft beer crossing cultural boundaries, some of my favourite beers have come from Japan, and a great deal of my favourite beers come from Belgium – just look at my top-100, it’s a who’s who of classic Belgian brews. So when a Japanese brewer like Kagua (otherwise known by the unimaginative and slightly self-conceited name of Nippon Beer Co.) decides to mix an East-meets-West style brew I’m definitely going to give it a go, how could I not?

Poured from a classic 330ml Belgian-style bottle into a Duvel tulip.

A: Cloudy deep bronze body with a pretty dense beige head that leaves light lacing inside the glass. Appearance a bit cloudy given the style, but otherwise this beer looks moreish. 8/10.

S: Yep, that Sanshō has an unmistakable and difficult to describe aroma that stands out loud and clear from first whiff – it’s like a mix between pepper, ginger and clove that really piques my interest as a lover of spice (they say “spice is the spice of life”). Background hints of dark fruit (plum mostly) and a cider apple character mingles with a caramel malt and musty yeast layer. There’s a decent amount of complexity going on here. 8/10.

T: Flavour hits you with a bang of spice – pepper, ginger, clove – right from the off, before bringing in a boozy Christmas cake dark fruit centre, some light caramel malt sweetness drops in, herbal notes towards the finish – which is dry and a touch boozy. Maybe it’s the Sanshō, but the flavour profile comes across a tad prickly, but otherwise this is a tasty drop. 7/10.

M: Medium bodied with a nice dense (though not creamy) texture, yep – ticks all the boxes, could be smoother and less carbonated, but otherwise excellent. 8/10.

D: Totally worth trying this beer just to experience Sanshō for the first time – it’s definitely different to anything I’ve ever tasted before and it numbs the mouth a little (like Kava, but less intense). As far as the beer itself goes – it’s a bit of a marriage of slightly disparate flavours, but thankfully it’s not a marriage that ends in divorce, in fact it gets better as I become more accustomed to the Sanshō character. Not a “10/10 would try again” brew, but then again what is? 8/10.

Food match: Hmmm, this is a tough one… I’m going to say: abura soba with ichi-mi.

Yet as the flavors unfold on the middle palate, the soft Belgianesque display comes full circle. A rapidly fading sweetness ensures a moderate fruit flavors of cherry, berry, grape and apple will balance with a light spicy twinge of peppercorn, cinnamon and fennel. Spicy alcohols bring about a spicy rose wine tone to close its taste.

Medium light on the palate, the spicy, dry and irresponsibly drinkable ale springs from the palate with a zip and a zeal of sparkling wine. Tart, crisp and spicy, an antiseptic finish brings about the spicy sansho taste and texture that's both numbing and piquant.

Flavor: Mildly bitter overall with the sweetness of the malts and the bitterness of the hops well balanced. Spicy aftertaste reminiscent of a Belgian rye ale with lemon (not that I've actually had such a beer).

Overall: bonus points for distinctiveness, presumably tied to the use of sansho. Considerably better than Kagua Blanc.

3.82/5  rDev -1.8%
look: 4.25 | smell: 4 | taste: 3.75 | feel: 3.5 | overall: 3.75
A: Pours a murky reddish brown in color with light amounts of active visible carbonation along the edges of the glass and some moderate ruby red highlights. The beer has a two finger tall dense foamy beige head that slowly reduces to a thick film covering the entire surface of the beer with a thick ring at the edges of the glass. Significant amounts of lacing are observed.

O: The combination of yuzu fruit and sansho peppers is very interesting and definitely works though this is a bit of a strange example of a BSDA. Enjoyable and I'm glad I tried it but not sure I would go out of my way to find this one again.

A: The beer is hazy very dark amber in color. It poured with a quarter finger high off white head that consistently left a short head covering the surface.
S: Light aromas of yuzu fruit are present in the nose along with some hints of sansho peppers.
T: The taste follows the smell, having flavors of yuzu fruit and notes of sansho peppers, the latter of which linger into the finish but aren't that spicy.
M: It feels medium-bodied on the palate and has a moderate amount of carbonation. The sansho peppers lend a slight amount of prickliness to the mouthfeel.
O: This beer tastes nothing like a Belgian Strong Dark Ale, but is very interesting with the mix of yuzu fruit and sansho peppers.

Rated by torrenju from Hong Kong

Reviewed by mightyyt from Thailand

3.67/5  rDev -5.7%
look: 3.5 | smell: 4 | taste: 3.5 | feel: 3.5 | overall: 3.75
Nice fruity aroma, no obvious hops smell. Color reminded me of a watery coffee with milk, a bit cloudy. Decent head, not much retention. My newbie taster skills fail to find a taste foothold to build on.....hate to say generically "fruity", but can't honestly expand much from there. Slight acid burn on finish. Feels fine, carbonation level quite appropriate. This is an expensive bottle of beer where I live, doubt if I will try again anytime soon. Does render a pleasant tasting burp....
Sep 27, 2015
Rated: 4.13 by AxlSkull from France

Rated by stomioka from New Jersey

Reviewed by Monochrome from France

3.36/5  rDev -13.6%
look: 3.5 | smell: 3.75 | taste: 3.25 | feel: 3 | overall: 3.25
Very fragrant, first thing I smell in this beer are the Sansho berry spices, I get a hint of yuzu(although slightly overpowered by the malt) as well.
Color is a rather dark copper, with an off-white head.
Taste wise I get predominant sansho spice, roasted malt and a hint of yuzu(citrus taste).
Mouthfeel, it's rather smooth with sharp spice notes.