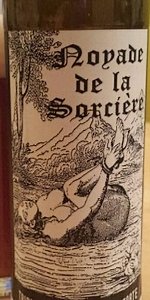 Appearance - This beer pours a foggy golden brown with 4 fingers of head which fade slowly but even 10 mins later still has a finger and a half. The head is a soft white almost like a marshmallow .

Aroma - lots of citrus on the nose, grapefruit, orange peel, peach, a bit of mango, not much else going on in the hop department but they try to balance the bitter sweet citrus juice with pale crackery malts. Its almost like saltine crackers in the background. The aroma just doesn't do it for me.

Taste - The taste is the same pretty much, you get citrus rind bitterness up front from the grapefruit and orange peel, a light sweetness of peach and mango. The bitterness almost feels soapy. Then they try and balance this out with pale malts but do to the strength it just doesn't work out all that well.

Feel - Not much to say here , the feel gives a touch more to this beer than the flavor and aroma but not all that much. It's pretty close to full bodied and almost chewy and the carbonation is creamy which is the only thing helping it go down.

Overall - I was intrigued by the logo and sold by the bottle. It seemed like there may have been potential for something interesting, Its not god awful but its pretty close. There are way to many flavors fighting to be the top dog. they all want to shine and get in the way of one another. This would be a pass for me!

So, I have kind of gotten wary of grabbing random bottles, but this one was new and I was feeling adventurous. I saw it was a 'triple IPA' and thought, "no good can come from that." But I went ahead and got it. It was definitely not good in my opinion, but it was not off or anything so it might just not have been my cup of tea.
It pours nice enough, a murky, gungy-looking gold brown with a huge, magnificent head. Honestly quite beautiful. The aroma was a little citrusy with some hops but was mainly soapy bitter, thickly malty, and slightly warm. The flavor follows suit with a little too much going on. To me it all just kind of tasted like a weird mash of flavors. It doesn't drink super well, was a bit too punchy on the carbonation, and kind of became shudder-inducing after a while. Would not have again; was not good. Maybe fans of bigger barleywines, old ales, etc. would get more of a kick out of this, but I don't know.

Bottle: Poured a deep dirty murky beige color ale with a super-giant foamy head with great retention and some really good lacing. Aroma of citrusy hoppy notes with some earthy flavors are pretty enjoyable. Taste is also dominated by citrusy notes with loads of earthy flavors with a dry mal backbone. Body is super full with limited filtration with a huge amount of carbonation. Weird beer that is close to a barleywine than an IPA. Some work need to be done on the bottling and level of carbonation but it is to be expected of such a new brewer.