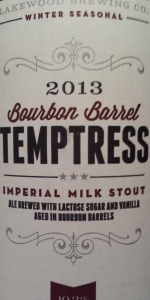 Hints of vanilla, oak, toffee, caramel, and roasted coffee intertwine for a boozy, dangerously smooth treat. Take your time with her and she'll reward you.

Aroma: It has a nice aroma of chocolate, bourbon, and caramel

Flavor: The flavor is sweet chocolate, caramel, vanilla, bourbon, significant bourbon. It's definitely like a dessert

Reviewed by 2late2brew from Texas

4.31/5  rDev -1.4%
look: 4 | smell: 4.25 | taste: 4.5 | feel: 4 | overall: 4.25
A: The beer is jet black in color. It poured with a half finger high mocha-colored head that died down, leaving a collar of dark tan bubbles around the edge and lots of lacing on the surface and down the sides of the glass.
S: Moderate aromas of bourbon are present in the nose along with notes of milk chocolate.
T: The taste follows the smell, except that the bourbon flavors are a bit stronger and run from the initial taste through the finish and also contribute hints of oaky vanilla.
M: It feels medium- to full-bodied and somewhat smooth on the palate with a moderate amount of carbonation.
O: The underlying milk stout provides a strong backbone and is capable of mostly standing up to the strong flavors of bourbon.

Reviewed by jngrizzaffi from Texas

Reviewed by aatazebeats from Wisconsin

Amazing smell. Smells like oak bourbon barrels, coffee, toffee, dark chocolate and vanilla. Tastes and feels like heaven. The taste is as described in the aroma, with a milky lactose sugar. Just the right amount of sweetness. Perfectly blended, with the barrel flavor not too overpowering, but just right. Very rich, creamy. Hides the 11% ABV very well. Dangerously well. I would recommend this to anybody. Bought it for $15.99 at my local HEB, and I can safely say it's worth every penny. The ultimate fine wine of beers.

APPEARANCE: Head blossoms as it pours, yielding ~8-9cm height. Khaki-tan in colour. Frothy, luscious, creamy, robust, and flocculent. Coats the sides with even lacing as it recedes, which takes a good 10+ minutes...not too shabby for an 11.3% ale.

Body is an opaque solid black. I see no yeast/lees within.

Looks quite robust. A nice looking imperial (milk) stout, though a darker, richer, more gilded head colour and an ink black body would do it better.

I'm just hoping it doesn't come out too sweet. Suggests a beer whose base and barrel notes are on even keel. I find no off-notes, overt booze, overt hoppy notes, or overt yeasty notes.

TASTE: Vanillin is actually the dominant note, immediately noticeable up front and staying through the finish into the aftertaste. It seems to actually mute the rest of the flavour profile, preventing the beer's flavours from really landing as well as they should. Depth of flavour is surprisingly poor as a result.

Has a sweet malt base but it isn't the teeth-eroding sweetness I always fear in a lactose sugar beer. Milk sugar, dark malts, chocolate malts, barrel sugars, heavy vanillin.

What really gets lost here is the toasty oak note the aroma promised, and I find its bourbon barrel flavours very lacking/barely present. Disappointing in a bourbon barrel aged beer...one has to wonder how long they aged it (I doubt it was even 1 year).

Vanilla and chocolate just drown out any subtleties it might otherwise have.

TEXTURE: Smooth, rich, wet, unrefreshing, medium heavy on the palate, thick, chewy, coating. It's not too syrupy, but it does have a high viscosity which makes it less drinkable. I don't feel any boozy warmth as I drink it, and it seems to do a good job hiding its ABV flavour-wise as well.

OVERALL: I quite enjoy ordinary Temptress, but this just doesn't bring the bourbon barrel flavours it needs to to really help set it apart as a barrel aged stout. I can't imagine ever buying this again given the wealth of superior bourbon barrel aged imperial stouts that are both cheaper and more widely distributed (e.g. New Holland Dragon's Milk). Not the vast improvement on Temptress I hoped for, and not a beer that really commits to bourbon flavour.

Lakewood needs to pick a better bourbon to use barrels from, needs to age this longer in them, and needs to balance out the beer's sweetness with at least some roasted barley or charred malt flavour.

Judged merely as a milk stout and ignoring its bourbon barrel ambitions, it's a fine brew that's worth trying, but 650ml is a bit of a chore to drink given its sweetness and weight on the palate and it isn't worth the money at $12.99 USD a bottle. Nowhere near a top 10 Texan beer in my book, but I'd be lying if I said it was bad. Just consume it in 5oz pours and you'll probably enjoy it more.