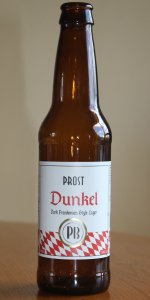 This is a dark amber lager made in the world famous brewing area around Bamberg, Germany. They are characterized by their smooth malty flavor. The Franconian version differs from the dark lagers of Bavaria by being slightly stronger and drier. Dunkels have a distinctive malty flavor that comes from a special brewing technique called decoction mashing. We are reviving the Altfränkisches Dunkel Bier from the Hümmer Brauerei in Breitengüßbach, the brewery whose brewhouse now resides in Denver, Colorado at Prost Brewing. (ABV 5.2% 25 IBU'S)

Prost's dunkel is a good looking beverage. The body is chestnut brown with numerous ruby highlights when directly backlit and copper highlights when not. The clarity is excellent. A dirty white head of two fingers forms on the pour, eventually settling to a thin, silky crown that leaves behind spotty lacing.

The nose is right on. Brown bread maltiness leads the way. There's a sturdy caramel presence as well that's washed aside by a spicy hop profile. The maltiness brings about a whisper of smoke, roasty grains without the bitterness. A flash of coffee also pushes through. This is a complex, malty masterpiece.

Luckily, the flavor follows the nose. The maltiness is robust. Big brown bread notes kick it off while being met with that deeply toasted graininess and soft caramel. The hops pop up mid-palate with a spicy, earthy quality. Mild coffee and a soft nuttiness wrap it all up. This beer has layer after layer of nuance and flavor. Excellent.

The body sits right in the middle of the spectrum, weight-wise. Carbonation is active but soft creating a fairly quick moving beverage. This beer dries up in a hurry and that's what makes the drinkability sky high. There's a soft lingering bitterness on the finish. This beer last a very short time in my glass.

Prost's dunkel is one of the best I have ever had. It's a little bigger than the average with a remarkably dry and softly bitter finish. It's nicely layered, complex, and flat out delicious. I wish these were available in the Chicagoland area.

Another huge thanks to my friend Joe for this guy.

A very deep mahogany beer. Crimson and chestnut highlights along with beautiful clarity make this beer pleasant to look at. Despite a vigorous poor, not much to say for the head. A thin khaki ring hugs the end with a swirl of islands hanging on to the surface with desperation in hopes of not being sunk. At the end of it all, a handful of little foam dots are sprinkled to the sides of the glass. (3.75)

Brown bread with a medium toast is abundantly clear. A little dark fruit like fig lies underneath along with very lightly roasted coffee beans. There is an earthy and meatiness to it as well, but hard for me to pinpoint with an appropriate description. (4.0)

I can't help but take a big first sip. This is very robust. Much more than I was expecting. Squaw bread comes to mind, with some added brown sugar and a thin slather of stone fruit jam. Roasted grain and again a very light coffee influence give a well rounded experience. A minimal floral and spicy finish complete the picture. (4.25)

It's a little lacking in carbonation, but it's silky body might actually benefit from this. Its medium weight and nice balance make it easy to drink, but also give an opportunity to savor between sips thanks to a fuller finish. The little bit of spice on the end compliment the bready sweetness wonderfully. (4.25)

A delicious dunkel. A style that rarely is seen except for in its hefe-inspired bretheren. A dunkel lager is a true gem of a style. I'd like to even point out that one of my all time favorite beers happens to be in this category by the name of Bayreuther-Aktien Landbier (Frankisch Dunkel). This is a damn fine representation of the style, and reminded me of this favorite of mine quite well. (4.25)

One of those beer styles that's near and dear to my heart, the south German dunkel. Not sure why, but people always seem to get these confused with dunkelweisses, which are totally different. This is essentially a dark and fairly mild (5 to 5.5%'ish) lager, that isn't too far from the idea of a "dark helles." This one is brewed in the Franconian style, which is a bit drier and stronger than the ones further south in Munich. In particular, this one is using a recipe straight from the Hümmer brewery, where Prost's equipment came from. It's also potentially the only double decoction mashed lager brewed in the US.
Arrives a medium to dark brown color. Resembles a cola color for the uninitiated. The head is extra creamy and looks almost like a nitro based on the thickness. The texture is actually even richer than most dunkels I've had in Germany. I guess that's not quite authentic...but is that a bad thing? I'm not sure.
The nose is mild, but reveals a strong dark malt base and noble hops that are "hiding in plain sight" behind it.
Sweet bready dark malts showcase notes of cocoa, hazelnut, and dark bread. Noble hops offer a tiny herbal character and slight bitterness to the finish, although the malt is the star. I'm not sure what the exact strength, but there's no alcohol heat, no off flavors, and only a mild lingering sweetness.
In fact, it's about as drinkable as beers get. While a bit drier, it reminds me a lot the Löwenbräu dunkel I've enjoyed in Munich. Some Franconian dunkels seem to cross paths with other styles like Schwarzbier or Märzen, but this one falls right in the zone I enjoy.
Pretty much the only thing that doesn't scream "This is German!" about this beer is the head, and it's actually a potential improvement depending on what you like.
Great stuff, and one I'm unbelievably glad to have.
Like German dark beers? You need to try this.

Thanks again to Joe for a great beer.

Rich coffee like body in both color and clarity. Minimal beige head leaves a thin ring with one spot of lace. Just one.
The aroma is deep and muted. Pumpernickel, molasses, hints of rye, hints of coffee.
It gets better and better with the taste. Complex and robust flavors of roasted grains, dark bread, molasses, a mustiness from the hops and a weak coffee and peppery finish.
Soft and silky mouth feel. Very delicate. Medium-ish body, lower in carbonation.

Fantastic drinkable Dunkel from the new Prost brewery in Denver. I was quite impressed with this one, and I was drinking from a new batch that was tapped just two days earlier. A nice hearty dark brown color with a creamy, long-lasting head. Nose was very bready with some soft roasty notes. More bready and roasty on the palate, with a delicious medly of malty flavors that were pleasing. I'm thinking dark bread, the ones with oat flakes on top. Good body and exceptionally drinkable. Very smooth across the palate and refreshing on a cold Fall evening in Denver. This one is top of my list for future Denver visits.

A- Transparent brown with medium lacing and minimal head. Nut brown look to it.

S- Mild nutty, pretty watered down though for S.

T- Light nuttiness. Very watery. I get some of the Dunkel flavor, but this growler is over a month old, but sealed.

M- Very watery. I am drinking German brews tonight, and this one falls short.

Brew pours a deep mahogany-almost black with ruby highlights in color with a thin beige cap. Some spotty lacing was seen when sipped. Aroma is of roasted malts with a hint of nuts. Bit more going on with the taste as there is some caramel and dark fruits also. Very smooth and goes down easy. Really nice with no bitterness noted for the finish. Medium-bodied with moderate carbonation. Overall, I really enjoyed this brew.