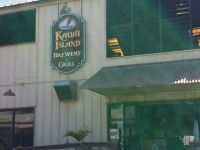 Rated by CWVegas from Nevada

3.96/5  rDev -0.3%
vibe: 3.75 | quality: 3.75 | service: 4.25 | selection: 4
In Port Allen close to the docks in a light industrial area. Its open air with 2 levels. Looked to be video,pinball upstairs,plenty of seating with a nice sized bar, wich was also full service liquor. Had a dozen taps on with a good variety. Growlers and crowlers were available on demand had lots of brewery swag for sale. Bartender very attentive and friendly. Food looked great i did not have any as i was about to go on dinner cruise. Very casual atmosphere with just slightly above average brew. This is a great place to visit coming or going to Wamaia Canyon or one of the many boat cruises that depart from Port Allen.
Jan 28, 2018
Rated: 3.91 by Montanabeerz from Montana

Reviewed by GreenEggsHam1 from Ohio

4.13/5  rDev +4%
vibe: 4 | quality: 4.25 | service: 4.25 | selection: 3.75 | food: 4.5
We visited Kauai Island Brewery after a day roaming the area seeing the sites. The place was busy for a Sunday evening, so we sat at the bar and chatted with a few of the locals. We both ordered the fish & chips and thought they were excellent. The fish was battered just right (not too heavy, not too light) and really hit the spot. The service was good, the atmosphere was good.
Dec 28, 2015
Rated: 3.84 by wethorseblanket from California

Reviewed by dbriesemeister from Minnesota

Reviewed by MaximumYuks from Oregon

Open air bar. Pleasant breeze blowing through, definitely added to the tropical ambiance. Can't ask for much more, honestly. If I lived down the street, this would be my go to.

Beer was good to very good. The DIPA was especially noteworthy. Was not disappointed by any of their offerings. They had roughly 15 beers on, all theirs. Style wise, pretty standard.

Service was great. Bartender was friendly, attentive and chatty (in a good way). Couldn't have asked for better quite honestly.

Like I said, pretty chill place. Good ambiance. Will definitely go back next time we're on Kauai.

The atmosphere is casual, chill and laid back. There are huge ceilings with an upstairs area and downstairs seating by the bar. I noticed a couple of TV's at the bar playing March Madness games. Service was solid and our waiter was really friendly and talkative. He appeared to know the menu very well and provided extensive descriptions for their food options. He also offered plenty of food suggestions and his personal favorites.

I think the atmosphere and service were some of the better aspects of my visit and want to be clear about that. Things started to go south when the food arrived. I'll offer more details on that soon.

They offered 10 different beers on tap today, but were out of 4 which I thought was a tad unusual. Offerings included Captain Cook's IPA, South Pacific Brown, The Fonz IPAaaa, Pakala Porter and several others. I had a Westside Wheat and Cane Fire Red. Both beers were pretty average (thin and watery mouthfeel) with really low carbonation levels. I also picked up some off notes of metallic flavors as well.

I ordered the Volcano Burger and requested it cooked medium. The description sounded really good as it comes with a spicy Hawaiian Lava sauce. You can pick your cheese and toppings too. When I received the burger it was burned to a crisp, way overcooked. Overcooked to the point that I was surprised they sent it out of the kitchen. The quality of the burger meat was disappointing as well. I am totally cool eating a burger cooked medium well, but this was ridiculous. On a positive note, the side salad was fresh and the salad dressing was tasty.

Within seconds of our food arriving, a bunch of huge flies starting landing on our food and beers. I was trying to eat the burger with one hand and swatting 6-8 flies away from my mouth with the other hand. It was nasty and created an unpleasant food experience. We quickly finished up, got the check and left.

I feel conflicted giving such a poor review of this place, but it is what it is. Maybe this was an anomaly? I wanted to like this place and I truly liked the vibe, but the entire experience was a huge let down.

3.81/5  rDev -4%
vibe: 4 | quality: 3.75 | service: 3.75 | selection: 4 | food: 3.5
This is just off the main drag near the dirt shirt place, towards the harbor where many group boat tours for dolphin and whale watching take off. You won't get ocean views here, but you will be eating drinking in a cavernous what seems like a boat hanger, outfitted as a tavern dining hall. The vibe does have a bit sailor like sense to it, but is mostly filled with just regulars and tourists gelling nicely.

Standard burger and quesadilla fare is presented, there are many food items including ahi, but I can't say I have ever had much on the menu. I can say the portions are a bit big.

As for the beer, there is a good variety of styles here from amber blonde ales, to IPA and porter. Their Captain Cook is particularly solid.

Service is pretty much solid and prices are also fairly reasonable as well. A worthy beer stop in the island.

Reviewed by djseanvandal from California

We went hiking close by a couple of days later and decided to stop by again and caught the brewer there. We were lucky enough to get a private tour of the brewery. The brewery was a really cool 10 barrel system and we struck a cool conversation with the brewer and how he got started out in Kauai 15 years ago.

We loved the ambiance here and definitely recommend trying the pale ale (hoppier than most), Captain Hook's IPA, and the Red.

Reviewed by TXHops from Texas

4.05/5  rDev +2%
vibe: 3.5 | quality: 4.5 | service: 3.5 | selection: 4.5 | food: 3.5
When I was in Kauai (July 2013), this was the only brewpub on the Island. In my experience, being the only brewpub is usually not a promising situation, but I was thoroughly impressed with Kauai Island Brewery and Grill. There were approximately 8 beers on tap--from a light and a blonde to 2 different IPA's, a red, two browns and a porter. All were outstanding examples of their styles. All the beers I tried (I had the sampler, but skipped the light and a wheat) were well above average and a little on the hoppy side.

Food was standard sports bar fare: lots of burgers, sandwiches, ribs, fish, etc..., with some Hawaiian accents. The food was above-average and very moderately priced for Hawaii. The only complaint I had about this place was the location--being in Eleele (next to Part Allen), it's not exactly in any of the tourist locations. We drove the 20-30 minutes from Poipu to try the place and even though I wanted to go back, it was too far to drive again. The restaurant is located in a warehouse complex, with a stark interior, but that shouldn't stop you from going.

Atmosphere is pretty good, it's in an industrial area, but they made it look nice. Really open, with a handful of tables and seats, a bar, and a few scattered TVs showing sports.

Quality was mostly good. A few hits and misses, I sampled about 5 or 6 different beers during my two visits, and enjoyed the Captain Cook IPA, Brown Ale, and Porter. The other few were kind of blah and forgettable, but far from being bad.

Service was good during both visits. The second time the server was really busy, but she was super friendly, and kept apologizing for slow service. (which wasn't even that bad)

Selection was about 10 different house beers, and a couple of guest taps as well.

Overall, definitely worth checking out.

Atmosphere is typical brewpub restaurant, there is seating for approximately a dozen at the bar and there is around 15 or so tables on the first floor. We did not make it up to the second floor. They have framed pictures of their beers and also have some tee shirts identical to the labels (if they were to bottle their brew).

Overall quality was pretty good. Beers were pretty solid. I will attempt to add a few beers later. The Porter was pretty comparable to Odell's Cutthroat. I had the Red which had a good flavor and body but it was a bit on the edge of skunkiness (which i have found with other reds brewed in Hawaii (Mehana BC).

Service was very good except for one individual. It was pretty busy both times we visited and the servers were constantly hustling to keep things moving. The first day we visited on the 28th they were down a server so the brewer was helping serve the lunch crowd. The bartender that day seemed to be a bit out of it as she was very slow and then dissapered for about 10-15 minutes. I do not want to knock the other servers because of her. Eventually the weak link will be exposed...

Selection of beer and food was good. They have 10 home beers and had 2 guest taps going.

Food was pretty good yesterday. We split a salad and Kalua pork sandwich. The salad was solid, the sandwich pretty good, but the fries were so-so.

Releatively speaking it was a reasonable value but for mainlanders the KIBC was a bit pricey. A good place to visit while on Kauai. I am sure we will visit again on Wednesday as we have a cruise set up across the street.

Reviewed by Hardcore from Hawaii

3.88/5  rDev -2.3%
vibe: 4 | quality: 4 | service: 4.5 | selection: 3 | food: 4
The Kauai Island Brewery and Grill is in a newly renovated warehouse near the Port Allen harbor on the south side of Kauai. It is very open with two levels, with the second floor facing the ocean and west side of the island. There is a full bar with several of their beers on tap as well as a few guest taps. Their website has a full description of their beers so I won't try to describe them all here. I had the Captain Cook Ipa as well as the Fonze Ipaaa. Both were very good with the Captain Cook Ipa tasting similar to Sierra Nevada's Torpedo, at least to me, and the Fonze Ipaaaa having more of a tropical fruit flavor.

The food is good too. I've had the nachos, calamari, fish and chips, ribs and goat cheese dip. The nachos are a big and really good. The calamari is pretty good and the ribs are fall off the bone tender. The goat cheese dip is served with flat-bread and pretty good too, just a little different than most dips that I've had. Overall, this place has really good beer and food in a nice building near the ocean.

Just an update to my review. I went there again recently and checked out their guest taps. It does rotate on a regular basis. I had SN Torpedo one day, and this past week I had Coronado Idiot Ipa. They also had Deschutes Organic Amber and a seasonal from Sam Adams as well as Blue Moon. I think there are at least 5 guest taps.

Update 10/12/12 Just had BP Big Eye and Lost Coast Indica from their guest taps. Their Ipa's are great and so are their rotating guest taps. This place just gets better and better.