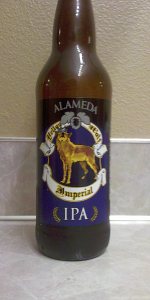 Enjoyed on tap at Beer Revolution in Calgary, the token IPA/double IPA finish to the evening. Quite light for a DIPA, a paler shade of honey-amber with a reasonable amount of whitish foam. Of course IPA and DIPA fall along a continuum and this brew smells about as aggressive as some of the stronger IPAs I've sampled, mixed citrus hops (grapefruit, orange, lime) along with a quasi-musky sweetness like old cotton candy or table syrup and some green weedy notes. The palate reflects this closely, with a sweet cotton candy or toasted marshmallow caramel malt backbone and fairly potent grapefruit citrus rind, pine, currant/Cascade hop character, and floral elements all vying for attention. I also get some old country green grass and vegetable peel flavors on the back end. Fairly thick and chewy as per the style with a semi-oily mouth feel and a vibrant carbonation. The ABV is too high but other than that this would be a reasonable session option for hopheads. Juicy and sweet yet sufficiently bitter and piney. Almost a DIPA prototype, albeit on the lighter end of the spectrum.

Sitting in the Whole Foods on one of our many inversion days ,2014. I have had the Wolf before but the dreariness of the day made me think of the lone wolf I happened upon in the Frank Church. The beer pours beautifully in the glass, white foam, bright orange fades into amber coloration. Abundant carbonation, solid lacing dripping slowly into the bright liquid. Aroma great, very pleasing to the senses. Mouth feel subtle, taste certainly grape fruit slightly orange , the bitters just a light bite. It has my palette searching for a bit more floral oil, not there. Not as much mystery as you would think a wolf would need to survive in the micro IPA world of today. Very good beer, I might be howling if the complexity were there. A very strong bark. Highly recommend. Cheers!

A: Pours a light orange to amber colour with a thin foam that dissipates somewhat quickly.

T: Well balanced grapefruit and oranges, other citrus and pine needles. Just as bitter as you'd want an IPA to be. Awesome to me.

M: Good carbonation with a slight buildup in bitterness.

O: This is the kind of IPA I would session without hesitation even though on the strong side, i.e. high ABV. Ranks pretty high on my IPA chart. Somewhat comparable to Sierra Nevada's Torpedo even though it has a bitter after taste. Way up there on my IPA list.

a hazy orange color with an off-white cup. aroma is mediocre. I sniff smelling earthy hops. Malts are more pronounced than I would expect with lots of bread and biscuit. The aroma is of grass

fairly sharp Hop flavors mainly grassy and slightly citrus and orange pith, but this beer is far from a juicy. Malt taste slightly sweeter than smoke suggestions toffee, beside the biscuit.

a full sustained carbonic acid.
This beer is pretty average

Produces a pale, sunny color, with a decent, froth head.

Smells of an orange infused dankness, balanced by slightly biscuity malts. Develops a crisp lime quality as the beer warms up, adding to the fruitiness, while taking the beer further away from relying on the malts.

Has a medium, but soft carbonation, with a pungent hoppiness from the very beginning, while finishing with more malts cutting through, affecting the mouthfeel by adding a more bubbly carbonation to it.

Tastes of a mellow white bread foundation, accompanied by lemon zest, which gets joined by sappy orange after establishing this foundation. Produces a pleasant hop intensity which got a great piney quality to, integrating the malts perfectly by creating a well balanced, hop defined beer. Right after the swallow though, the hops produce an odd, herbal, medicinic dryness, reminding me of some sort of Jägermeister while biting into blood orange zest, which turn out to be more present than any other flavor at that stage. During its finish, the beer gets back a bit of its initial balance, with resin and lime being recognizable again.

This beer could be awesome, but once established, the off-putting herbal medicine hop dryness wont leave the palate, adding a strange twist to the brew, by basically denying its initial qualities.