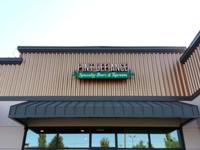 View: Place Reviews
Reviews: 5 | Ratings: 15 | Log in to view all ratings and sort

I have been wanting to check this place out for a while, and, well today it finally happened and I have to say I LOVE THIS PLACE. A lot of beer markets and shops can be very pretentious and a little bit awkward. NOT Pint Defiance. Uber, Super, amazingly friendly and helpful staff. Since it is a taproom as well as a bottle shop there is a lot of noise, people talking, having a good time. This gives a way different vibe then an ordinary bottle shop so you don't feel like the guys are watching and waiting for you to make your pick and go. The selection was stupendous. The prices are so good! It is organized so well. I like how the shelves have the prices and info on little laminated cards under the beer so you don't have to take out the bottle and inspect for a little price sticker somewhere. But most of all I have to say it was the staff that got me. Awesome guys. Very friendly and very helpful. I can't wait to come back here.

Besides having a wide selection of beers and ciders, you can belly up to the bar and have them pull one for you. Nothing like shopping for beer with a fine craft beer in your hands. There are 12 taps that are always changing. I asked once how they decide which beers to they put on the board. Basically, the priority is a beer they don't usually get or a beer they haven't had on tap for a while. Unless it is Brewers Night, there are always a couple of IPAs, a pale or two, a red or brown, a couple of specialty releases, a stout, a porter, and one cider. If there isn't something there you want, you don't like beer!

The specialty nights and events are what sets this apart. Usually one night a week is set aside for Brewers Night or special pours linking a style of beer. On Sundays, they do bottle pours with a flight of four, again with a theme. They make beer fun and that is the way it should be. The staff are top notch.

You won't find a bargain, but you won't get pinched either. For a local store, the prices are very reasonable. Above all, the people and surroundings are comfortable. It is just a pleasure being there. So, what are you waiting for?

Quality - A godsend for the area. Don't get me wrong - I love Tacoma, but this was badly needed!

Service - The owners are usually there in the morning, with a very cool waitstaff working well into the evening. They constantly update their taplist on facebook ( https://www.facebook.com/PintDefiance ) as well as announcing when limited edition beers are coming in. They carefully wrap up or box your bottles for the road.

Value - $$ Reasonable. My costs are high, because I buy big effing beers. If this place had a kitchen & doubled the taps, I would probably have to have my mail delivered here.

Located just a mile and half up the road from my friend's house, something tells me I'll be stopping by here a lot over the years to come.

PD is located in a smallish strip mall, just off of 19th Street in University place/tacoma. The place really doesn't look like much from the outside or inside, but don't let looks deceive you when it comes to this place. This is another spot that does the most with a fairly small space, as they have a 13 door cooler on your right as you walk in, a small display of beer glasses to your left, and then a small taproom area in the back. The folks here are very friendly and passionate about good beer, particularly the owner here (Barry?) I thought. Aside from the typical "can we help you with anything" when you first walk in, they also ask if they can pour you a beer while you survey the bottle selection.

As for the beer selection, they have some 12 cooler rows of craft beer here (no macro crap that I could see anywhere), and then a row of ciders as well. In addition, they have some 9 beers on tap (one cider), which you can order by the glass or growler/half growler to go. Quality was pretty high.... on tap, they had things like the Hale's afterrmath (replaced with the hale's bourbon barrel supergoose while i was there), Black Butte XXIV, and Ayinger Celebrator, but with a very strong selection of bottles and cans as well. Beers in the cooler are organzied by State and country, an arrangement I prefer to stocking by beer style. While i agreee with Josh that at present you won't find anything mindblowing, they had a very strong selection of silver city beers, and a nice selection of Deschutes and hair of the dog as well. I'm not sure, but I think you can buy bottles to consume on the premise as well (Barry mentioned that folks could order glasses of bottled BB XXIV should the keg blow), and it appeared there was no upcharge for on premise consumption.

Prices were pretty reasonable I thought. Prices for a pint started at $4, topping off at $5.50 for a 10.5 ounce glass of celebrator (the same size glass of the BB XXIV was $4.25 I think). Growler prices started at $10 and topped off at $17 and $21 for things like the aftermath DIPA and the Ayinger Celebrator.

Service was very good here... the folks working here are friendly and they know their stuff when it comes to beer. While the atmosphere of this place is nothing to write home about (narrow room with green walls and some typical beer bric-a-brac on the walls), the folks here are so friendly, it just makes for a nice vibe, conducive to hanging out and having a beer or three.

As for food, they have some chips and pretzels, and that's about it.

Barry mentioned that although they'd been open for less than a week, business had been pretty good so far, even though the location is a bit iffy in my opinion (I just don't think the place stands out very well from the other places in the strip mall). I would have to agree, as there was a steady stream of customers coming in around 2:00 on a Friday.

There is absolutely no doubt that I'll be back.... and probably sooner rather than later.

Edit from 1/10/13. Nothing really new to add, but I did want to recommend that folks planning to stop by here for a specific beer call in advance. This place has become quite popular (to no great surprise), and they do a considerable growler sale business. Consequently, they have a habit of running through certain beers pretty quickly (RPM and Hop Venom blew in less than a day!), and more than once I've stopped by to try a specific beer (never got to try the double dry hopped Ninkasi Tricerhops), only to find it gone. There's invariably something on tap that I want to drink, but it's something to keep in mind if you're planning to stop by specifically for a growler of a certain beer.

A: I strolled in on opening day and there were about thirty people browsing, drinking and chilling; some were looking for beer, others were drinking beer. Nice atmosphere. Pretty inviting place.

S: Despite how busy they were they still stayed on top of their game. They managed to mix, mingle and give me a shout out despite the traffic. So they are attentive.

S: Selection is good. Nothing uber rare right now but they are starting out and the bottle/draft selection is bound to keep anyone happy