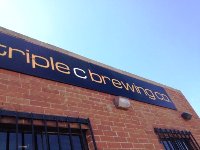 Cool little digs near southend. Went on a Saturday afrernoon to grab a growler for a party. Basically it was a clusterfuck at the bar. There was a line but peeps would go around the other side etc. the bartenders were basically worthless. The one girl was completely lost. I ordered the growler. She went to the back and she forgot who ordered it and what I wanted in it. Other than that all was fine. I met one of the owners, Chris. He was a really nice guy. He told me of some future barrel aged brews that they were gonna do with Jim Beam barrels. Great guy.

Update: Since they have been around a bit longer, I have swung by several times. Looks like they got their service kinks fixed and the quality of the beer is ever improving. I have really enjoyed their barrel aged series. These guys are killing it right now.

Update to the Update: Now these guys are doing a Pilot Batch each Wednesday with a one keg one off. It can range from a Saison to a Lager. An IPA to a smoked beer. I do all I can to get by each Wednesday to try something new.

Charlotte is an ever-expanding beer market with new breweries popping up all the time. Triple C is my favorite place. The beer is great, but the people are even better. Looking forward to their expansion.