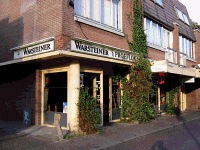 Proeflokaal means "Tasting Room", and I fell in love with this Bar as soon as I walked in. It was 11:30am and it had just opened. What a fantastic place, an unassuming looking Bar-Café on a corner location in a rather modern canal street, only really given away by the "Warsteiner t Proeflokaal" sign.
The bar is in the centre of the floor to your right as you walk in, the décor of which reminded me somewhat a bit of a Student Bar from my Uni.days. Decorated with Classic Rock memorabilia, English & Dutch Football (Soccer!) Scarves, Flags, Vinyl Singles, Music Posters, Photos of Drinking Sessions, as well as all sorts of Breweriana and Beer Adverts from around the World (you get the picture). It is true to say that it certainly lacks classic features of say other Olde bars, but at least it is not trying to be something it is not. It is new (12/97) and has developed its own character, and lots of it. Anyway, I was not bothered because I came for one thing and one thing only, the Beer Range.
.and what a range!!! Where to start? Well, on draft there are about 10 beers at any one time, mainly Dutch & Belgium beers, surprisingly including an English Real Ale on Handpump (very rare). In the Bottle, well at least 300 minimum, and this has been known to sometimes creep towards the 400 figure. Mainly Belgium Beers, including most of the Trappistes & best Abbey beers, a good range of Dutch Independents, several German breweries offerings, UK beers, I even noted Anchor Liberty Ale and many other Beers from around the Globe. A truly International beer selection.
This is a basic drinking establishment that offers a truly well thought out & extremely varied, but superb, range of beers. It is true to say that this range is probably unparalled in the Netherlands, and it can certainly hold its head high with pride when being compared to the cream of Belgium Bars.
The chap behind the bar, Roel, was extremely friendly & very helpful, and he explained the draft beers on sale at the time. No Food, but basic snacks, Warm Pies or Sandwiches  but somehow I got the feeling that patrons of this establishment do not come here for the fare.
The Beer List here will suit ALL discerning drinkers, though the Bar itself may not appeal to some. I would imagine at night that this places really Rocks (quite literally). Either way, it is a bloody marvellous place to visit, and a very friendly bar with knowledgeable staff who know their beers.
Last Visit 11-26-02.

Living up to its name as the local bar, 't Proeflokaal is not only a happening place on a Saturday night with locals, but also a happeing place with beer. While the place is small and every table taken, it's cozy, darkly lit, and wasn't packed to the gills with people standing around. At the small bar I sat next to a young Delft couple which I exchanged a few stories and ideas.

Eight beers were pouring from the taps, including Hopus, Chimay Red, and Flying Dog. I was surprised how many pours of Hopus I was seeing; was there a special I was unaware of? Continuing, over 150 bottles in stock as well. Expect to see Struise, Evil Twin, Alvinne, Cantillon, Des Garragues, and De Molen. In fact, one-fifth of the total bottle selection were De Molen beers! Okay, so they were out of a few, but I did manage to try one of their delicious IPA's. It also came with its own De Molen glass, but by this point I had come to expect this practice in the Netherlands.

Drink with the locals, drink at Delft's 't Proeflokaal.

Popped in here during a breif visit to Delft. Got there pretty late on a Thursday night when the place was packed, there was a sports quiz just finishing. The bar cleared quite quickly after that.

There is an English sports theme in the place, quite a lot of memorabilia adorning the walls. Fine if you like that kind of thing.

They had a couple of English beers on draft, Old Speckled Hen was one. I pretty much concentrated on the bottled selection which was pretty good (about 60 or so). Good selection of Trappists.

Decor and feel was very much of an English pub rather than a traditional Dutch/low countries pub. Worth a visit though certainly not first on my list if I came back to Delft.

A bar I visit at least once every month. So why do I keep coming back? Mostly because my friends are there but they have a very nice range of beers as well. Never counted them but I think 8 beers on tap and about 60 different bottled beers. They used to have lots of English beers but since the past 12 months mainly Belgian. On tap there are always surpises, of course the cask conditioned English ale but also other rare stuff like 16 year old Eylenbosch Framboise once. The atmosphere is very good, but be aware of crowded nights when the smoke is thick like sea fog. Most of the staff is friendly and know their beers but - again when crowded - do not always have time to help you with difficult questions.