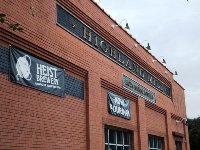 Although only 1 visit...
Really enjoyed being there hated to leave,
I can see why BA rankscitraquench the number 1 beer made in NC.
Just wonderful.
Citraquench on tap was delicious, citrus notes and back end hop bite made it a top tier beer.
There is something magical about a fresh, highest-quality , delicious ipa.
We also brought home canned beer that was made 2 days ago. Yep hit the lottery.
I had a burger that was delicious and the jalapeño fries were excellent as well.
My wife enjoyed the steak and taters too.
Everything was high end at Heist. Good value. Great product. Friendly service,
Would love to go back and hang.
Highly recommended for beer & food.
Dan

You can always find a good or great beer, or 2 here. They are not afraid to experiment, and yet they have several beers that make the menu quite often. They do different size pours, can get a growler of most on tap, and they have various 4 packs on sale. Don't be afraid to try several beers, there's a favorite waiting to be discovered. Their IPA game is beyond average, with tasty NEIPA's and sometimes West Coast style as well.

Cool place. Bartender was very knowledgeable and explained the beers perfectly. He also provided some solid recommendations for our next stop on our out-of-state brewery crawl. Very solid place, and some really awesome beers.

Heist has a pretty nice vibe going on. Kind of old looking but also kind of new. The service was solid there and the selection was pretty good too. I had heard great things about the food but didn't order any. The beers were good, no real flaws come to mind here, I'd probably go back if in the area.

Went in here on a Tuesday night, so pretty tame crowd. Most of the place was empty, but there were a handful of people outside since it was so nice. I took a spot at the bar and tried a couple different beers and a flight, but did not order any food. I had a few different IPAs, all of which were good. I also had a BA Barleywine that was tasty, and a pastry stout that was OK. I love Citraquench'l, so took home a couple 4-packs, and also got a crowler of Strange Clouds. This was probably my favorite brewery during my time in Charlotte.

In the popular NODA district of Charlotte. Good service. Nice vibe inside, with good beers and a full food menu; also a deck outside. Alot of other restaurants and bars within walking distance. Absolutely loved the Citraquench'l which was on tap. Also, cans to go. Would definitely go back.

Just a few minutes down the highway from anywhere in Charlotte.

Cool, down home and casual spot with multiple rooms and multiple bars. I liked everything about this spot, chill service, outdoor seating, eclectic food options and on point beer to be had...fine place to check out and have a good time at in Charlotte, NC

Heist Brewpub is a fairly large, seemingly well-established place. Located in Charlotte's NoDa neighborhood, Heist has become well-known for the quality of their beer; Heist is also known for their massive whiskey selection and their kitchen, which turns out a nice selection of shared plate offerings, woodfired flatbreads, sandwiches and Charcuterie boards (note that the brunch, lunch and dinner menus are different). When I visited about 2 PM on a holiday weekend Saturday, it was predictably busy but not over-crowded.

The exterior is a clean, classy blend of brick, dark anodized aluminum and glass. The interior is brick and heavy wood, with hanging ventilation ductwork and exposed beams and girders lending a bit of an industrial feel. Tables are wood slab atop minimalist black hardware that matches the chairs, while the coloration of the flooring pairs with the table tops themselves, resulting in a unified, consistent feel. The larger dining area provides an excellent view of the brewing equipment.

Heist has three bars: the main bar is up front as you come in, at the back of a smaller dining area, and there's a smaller bar (seats about 10) at the back of the larger dining area; the third bar is in the Canteen Taproom, a self-contained second taproom in the back that is often used for special events and live music. Given that we had stopped in just for flights, we chose to sit in the Canteen Taproom as it was less crowded than the dining areas.

The Canteen Taproom has sixteen taps, fourteen of which were in service when we were there. Three of them were guest taps, which is kind of unusual at a brewery, but since Heist's beer offerings are so IPA-heavy (ten of the eleven Heist taps were IPAs or IIPAs), having a few guest taps makes sense. Flights of five generous pours were served in four-ounce rocks glasses, which is a not-uncommon choice for flight pours. All other pours were in style-appropriate glassware; many beers were available in two pour sizes.

I don't see that much Heist beer in Wilmington, so I stuck to their beers for my flight, and I'm glad I did. Four of them were fantastic- Room For Activities, Mo-J, Überquench'l, and All Is Ripe- and the fifth, Lupulin For Lupus, was a solid IPA, just not on the level of the others. I would rank them loosely in the order listed, with Room For Activities being my favorite of the bunch and the next three being so close in quality that the ranking is frankly tenuous. This was certainly an enjoyable flight.

I didn't get any food, and I wasn't seated in a dining area, so I can't speak to the food. Beer-to-go was available in crowlers and cans. Staff was friendly, efficient and knowledgeable.

I will definitely be back to Heist.

This is an unexpectedly large place, with a small room and bar up front that leads into a very large, very open restaurant-ized section. And at the end of that is the final boss, or more accurately, a room that serves more as a live music venue, and is pretty cool to boot.

So, you want some NE IPAs? I didn't even know that's what they did here but it was on the way home so we stopped in. Order after order, another opaque orange juice bomb came out. If you're looking for something else, the selection gets its variety by offering guest drafts. All the beers we had were great, and I was also happy to order one that benefits those combating Lupus, so soon after my buddy's mom died from complications of the disease.

Service is a little slow in this back room, even when most people are enjoying the music and not coming up to the bar, but it wasn't bad.

Food is trendy and hipster, and all the better for it. How about chicken and waffles, where the waffle is used as a taco shell and all the goodies are folded inside? Oh yeah the flatbread was bitchin' too, loaded with all the flavor.

Great place to grab a beer and the food is amazing. The carne asada flat bread is money. Excellent beers great service this is a must stop in Charlotte.