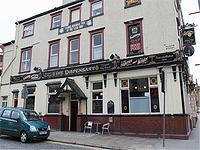 View: Place Reviews
Reviews: 5 | Ratings: 6 | Log in to view all ratings and sort
Reviews by TheLongBeachBum:

A Pub-Crawl around Liverpool can be a very rewarding experience, it is one of my top 3 English Cities for Pub-Crawling. But if you fancy a detour away from the larger Ale Houses in the City Centre that cater for the masses, and hanker to visit a genuine locals bar for a change, but you do not want to forsake the beer range (most smaller local Bars in UK only ever serve 1 or 2 Real Ales on Handpump), then the Dispensary is the Pub for you. Often packed with Scousers (the slang name for the locals from Liverpool), with a smattering of a few outsiders that know where to drink good beer, in genuinely friendly surroundings.
An original Victorian corner Ale House that was once called the Grapes (strangely enough owned by the original Cains Brewery), references to which can been seem throughout the interior if you look carefully. A split level, raised at the back, helps to add interest to a long thin single room bar. However, the centre-piece of this Pub is the 100 year-old Irish Bar that runs all the way down one side. Other furnishings of interest include a quite astounding Pair of Bellows the sheer size of which I have never seen before or since, Chandeliers that look a little out of place, several original old Brewery Mirrors and etched Windows.
Beer Range is very good. Cask beers always on Handpump are; Cains Mild, Cains Bitter and Cains Formidable, a Real Cider on draft, plus four ever changing Guest Beers (usually all from UK micro-breweries / independents). All Cask beers are served in the tip-top condition. Occasionally holds its own Mini-Beer-Festivals, and has a small range of overseas Bottled Beers.

Recipient of many awards, include some from English Heritage for the quality of the Pubs Interior, and Pubs of Excellence in 2002 (1 of only 8) handed out by Merseyside CAMRA, for the consistently high quality of its Beer. Has the Cask Marque Accreditation also.

If you want to know what a real locals Pub is like, visit this classic Victorian corner Ale House, and have a few Pints of some of the best Cask Ales available in Liverpool.

Ahh geez, how could I not have rated the Dispensary, my favorite pub in all of Liverpool? Well first off, they pour Mark's Mild, one of my favorite ales. Secondly, it doesn't look as if it's changed much in the last few hundred years, which is really cool. Finally, it's a comfortable, cozy place, with friendly regulars and visitors alike. If I were to arrive in Liverpool right now it's the first place I'd go, and I'd probably stay there for quite a while!

Typical down to earth old fashioned English "boozer" with rather ramshackle interior, various style benches tables and seating, wooden floor around the bar, and rather dirty worn carpet elsewhere! At time of visit seven hand pulls serving various beers - the ones we had were on good form and fair price for city centre. Mixed clientelle and lively atmosphere give it character, though I just felt the place needed tidying up and a good clean!!

Two TV screens showing sports or news. There was no food menu in sight, but signs on the walls indicated food was available - but non was seen and the sign looked out of date!

Definately worth a visit for the beer selection, and only a few minutes walk from Lime Street Station and easy walk to other well known pubs in the area.

This is only the third review of this pub, but I have very little to add, because the two before me have nailed it. No one drinks halves in here, it is a proper pub for proper pub goers, always been busy with friendly locals and friendly visitors on my many visits.

Cains beers at their best, Liverpool is full of really good bars, this is definately one of them.

I'm not going to be able to add much more than Darren has, as I ended up here late at night, after quite a long day of pub crawling. none-the-less, this place was absoluteley impressive. As Darren already noted, this place was once called the grapes, and there is an old sign for "the grapes" somewhere in this small, yet somehow cavernous pub. Atmosphere is awesome. A super, very old wooden bar runs half the length of the building with some small, *old* tables and mis-matched chairs in the other end of the room. Strange breweriania and victorian artifacts clutter and compete for space on the ceiling and walls. The quality of the beers here was right on form and the selection, whilst modest, was focused on local cask ales, and some nice international bottles. The service was friendly and the patrons here definately made us feel at home. I'm not sure if they do food, but they may. An awesome Victorian boozer in Liverpool. Definately recommended highly.