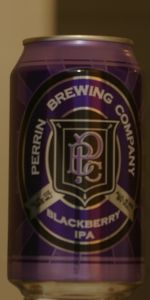 Notes: This seasonal brew combines the tart sweetness of ripened Blackberries along with an aromatic floral bouquet of fresh Michigan bittering hops, sit back with this beer and enjoy the change of the seasons wherever you are.

Reviewed by Jason from Massachusetts

Perfectly clear burgundy hue, lacing has a pinkish tinge to it and does a great job sticking around. By far this is a spectacular looking brew. Blackberry flavor is dominant throughout the nose and palate. Perhaps a whiff of herbal hop in the nose. Smooth with a slightly creamy body. A ton of blackberry flavor with a hop bitterness that hits middle to end. Blackberry flavor lingers a bit longer. Is this an IPA? Highly debatable. Is this a delicious fruited beer with some hop bitterness for balance, no doubt. If IPA was not in the name / on the label I would have never tagged it as one. A good sip regardless.

5/5  rDev +34%
look: 5 | smell: 5 | taste: 5 | feel: 5 | overall: 5
What an interesting and refreshing IPA. I would have never thought of blending these two together, interesting profile this one creates and could almost be confused for a fruit and field beer. Another great one from the mitten and another great balance of brewed sweetness!
Apr 07, 2019

Rated by Michelleroo from Michigan

Reviewed by Red5StandingBy from Maryland

L: Pours a really beautiful rose water color, light red hued with a touch of orange, and a very light pink head of about a finger. Head has average retention but laces very well. Really a beautiful beer and the head is somewhat lacking in retention for the style but this is also an older can.

S: Very rich blackberry note right off the bat, with some underlying ripe fruit in there as well. Not overly strong, but mouthwatering and inviting.

T: Again, rich blackberry right away, almost some ripe grape underneath with that underlying fruit. Not bitter at all, very sweet and this could be considered a fruit beer to me. Very tasty. Not complex but quaffable.

O: Really a nice beer, definitely not complex but the unique flavor and attractive color help this beer a lot.

Reviewed by MargotDarko from Michigan

3.75/5  rDev +0.5%
look: 3.75 | smell: 3.75 | taste: 3.75 | feel: 3.75 | overall: 3.75
for all the fruited ipa out there, i havent seen any with blackberry, so this is somewhat exciting, and a cool shift away from citrus. the beer is pretty good, but not better than any of the other perrin cans, they are solid beers but they have been a step below the stuff they barrel age and bottle. this is pretty blackberry heavy, juicy and tangy without being too sweet, and more importantly not interfering too much with this being an ipa. the hops still come through clear, citrusy, and very bitter, especially in the finish. the berries and the hops are a surprising but fantastic combination, the right kind of hops and the right amount of blackberries, i didnt expect this to taste so good. honestly, its the feel that throws me a little. its thin and super carbonated, almost feels more like a soda pop than a beer as a result, a fluffier, bigger feel would help this beer, but i do like all the carbonation keeping the fruit from getting too sweet. i think its as natural a fusion as their grapefruit ipa, and something a bit different. good use of the blackberries, they dont lose their identity, and i like it being so bitter later on. cool beer, an easy can to drink a few of.
Nov 30, 2016
Rated: 3.87 by Keananmichael5 from California

Rated by NateDyk47 from Michigan