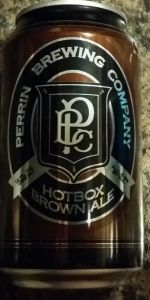 Damn fine brown ale. Served on tap in a shaker pint. Cola colored liquid with a small ring of foam. Nice big aromas of coffee, some cocoa, caramel and bread. Underneath the coffee is the base of a damn fine brown: nutty, toasty and sweet, caramel, toffee and cocoa swim around with a beautiful coffee flavor. Perrin has become a brewer I'm kicking myself over not having tried sooner.

Appearance: Pours a translucent coffee color with a beige head that rises an inch above the liquid; adequate retention and splashy lacing

Taste: Toasted brown bread and chocolate forward, with coffee flavors developing, through the middle; a metallic tone comes along, after the swallow

Overall: I don't often drink brown ales, but this one has some nice chocolate and coffee flavors; not crazy about the finish but still a good beer

Thanks, daniels79, for the opportunity

Can from Rick. Smoky, peaty, nutty. Body kind of comes off as thin. Wood, dirt. Brown’s not necessarily my thing., but was a nice break from sour beers.

I picked up a can of Perrin's Hotbox Brown Ale for $1.89 at The Lager Mill. I'm continuing on with the new Perrin cans and it's time to try this one, so lets see how it goes. 2016 Vintage. Poured from a 12oz can into a imperial pint glass.

A- The label looks nice, it's got a clean look that's just a little eye catching. It poured a darker brown color that took on a little bit of a crimson hue when held to the light with a finger and half worth of creamy and slightly fluffy lighter tan head that died down to a thin ring that eventually faded away and it left a little bit of spotty lacing behind. This is a pretty nice looking beer, I have no complaints.

S- The aroma starts off with a medium amount of sweetness with the coffee being the first to show up and it imparts a big and bold black coffee aroma that dominated the aroma. There's a little bit of Brown Ale aroma with a little bit of nuttiness, but other than that it's the coffee that takes over this beer. The aroma is pretty nice, but I wish it was more balanced.

T- The taste seems to be similar to the aroma, but more balanced and it starts off with a medium amount of sweetness with the coffee still being the first to show up, it's a little lighter than it was in the aroma. but it imparts the same black coffee aspects. Up next comes a little bit of that Brown Ale base with a slight nutty flavor. On the finish there's hardly any bitterness with some sweetness taking it's place and more coffee flavors showing up in the aftertaste. This is a good tasting beer, I like that it's more balanced than the aroma.

M- Smooth, fairly crisp, medium bodied with a medium amount of carbonation. The mouthfeel is good and it works well with this beer.

Overall I thought this was a good beer and good example of the style, I was getting a little worried when I got to the aroma and it was pretty balanced, but luckily it was more balanced in the taste and that made for a pretty good beer. This beer had nice drinkability, I could drink a couple, but that would be my limit. What I like the most about this beer was the taste and mouthfeel, they were good and the highlights of this beer. What I like the least about this beer is the aroma. it was very unbalanced. I would buy this beer again and I would recommend it to anyone looking for a Coffee Brown Ale. All in all I was happy with this beer, and it lived up to it's description. It's not my favorite Perrin beer, but it's good example of the style. Good job guys, this is a tasty beer.

O- A really nice, super easy drink. Not all about the coffee, but the coffee is really good. Worth seeking out.

Wow! This thing tastes outstanding and I haven't even let it warm much. The coffee flavor is front and center, and ooooohhh so rich and smooth. Chocolate comes in second. Semi sweet. There is some sweet carmel/toffee, and the brown malts with a hint of nutty flavor. Not peanut though. Richer. Like cashew or almond. It finishes very mellow with a wonderful roasted almond aftertaste against an expresso like lingering flavor.

Body is on the hefty side for most browns.

I may have been harsh on appearance and I am trying really hard to be objective with taste and overall score because this one just hits a lot of notes for me. Love it! Thanks @beergorilla

Perrin is rather new around these parts but so far they have been pretty good to me. This is the last remaining beer of my recent cheap purchases and judging from reviews and experience with the brewery I shouldnt be disappointed. Brown Ales really aren't a favorite of mine but we shall see how this one goes.

Look - From the twelve ounce aluminum can hard poured into a pint glass. As always with these cans, it seems to take multiple pours to truly get all of the beer out. Pours black instead of brown though ruby hues can be seen if held up to the light and it becomes slightly transparent. The head settles to a finger and a half of light mocha head amongst the top of the swill. Carbonation appears to be low. Only stragglers of lacing remain after a finished glass.

Smell - Medium amounts of coffee grounds open up the nose with a touch of hazel nut and a moderate dosage of chocolate. Smells very ' commercial ' to me without anything truly sticking out to set it apart from anything else. More stout like than brown ale like, almost like Right Brain CEO stout in nature.

Taste - Perhaps I'll be the first to say that this is honestly one of the most coffee tasting beers I have ever come across in my just over 700 reviews. Maybe even THE most coffee forward beers I have ever had. Tastes like straight up coffee beans fresh from the container. Some chocolate notes as well though the hazel nuts are kept to a minimum. Coffee. In its purest form.

Feel - The body of course doesn't live up to the flavor since its so low in ABV and from a can. Rather watery with an extremely low level of carbonation. Flavors remain much the same with some additional bitterness as it sits. Even a touch of surprising alcohol as it goes down the throat. Finishes very clean and easy.

Overall - The flavor was fantastic but the other categories didn't quite live up to it, which isn't THAT big of a deal seeing as they aren't what is truly important with any beer. I will buy this again and the score may seem quite a bit lower relative to how good the brew actually was. But I have to be honest despite how much I liked the flavor. As always, try it for yourself and come to your own conclusion..

Wow best coffee flavor in a beer I've ever had. That being said not much else to add. For a brown I wouldn't expect a complex profile. Overall, nice balance and easy drinking.

Can no date, but should be fresh as a new offering from Perrin. Syrong pour into stout glass. Starts out great.
Look-finger of foam.
Aroma - strong coffee and hint of chocolate and smoke
Taste - follows aroma
But,..... fades in all three areas. Aroma dies, no lacing, taste turns weak with a bitter aftertaste. Similar to going from a great coffee to weak old coffee.
Second can from six to turn out this way. Will update review if experience changes further into the 6.

A - pours a very dark brown, with some khaki head that quickly dissipates.

Hotbox Brown Ale from Perrin Brewing Co.
Beer rating: 88 out of 100 with 73 ratings