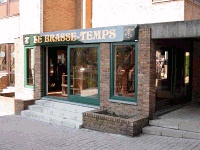 Le Brasse-Temps is a new microbrewery that only opened on 7th September 2001, operated by Dubuisson (of Bush fame), in Louvain-la-Neuve. In fact L-la-N itself is reasonably &#8220;new&#8221;. For late in 1968, the French speaking part of the University of Leuven &#8220;split&#8221; from their Flemish counterparts, and set up here, hence &#8220;New Leuven&#8221;, clever eh?? But don&#8217;t be fooled, this is no Oxford, Cambridge, Eton or Harvard - it is a concrete & brick monstrosity set in beautiful countryside. So &#8220;Un-Belgium&#8221;, it is unreal.
The Bar is located in the middle of this Architectural Carbuncle, and well worth seeking out. You will instantly recognise it, for the gleaming Copper is easily viewable from outside. A deservedly popular bar with the many visitors & Students that live here.
This was the first Brewery Visit on our Annual Easter tour. Upon arrival we had a tour of the very smart and impressive looking Copper Vesselled Brewery. Afterwards we were seated, and ready for food & to try the beers brewed on the premises. The first Cuvée des Trolls (7% ABV) is a marvellous full flavoured fruity beer. The second, L'Ambrée (6% ABV) is a little more subdued in character, strength and flavour, but a good beer nonetheless. The newest beer was La Blanche-Neuve (4.5%ABV) and I really like the spicy facet of this beer, very refreshing. Other beers are in the pipeline (sorry couldn&#8217;t resist it!!), as the Brewery develops. In addition, other Bush beers are also on sale here. Bush 12, now called Bush Ambrée (Scaldis-US), Bush Beer 7 (Clovis-US), and they had the newer 10.5% Bush Blonde (??no name yet??-US). The Food, and the Service, was excellent. High quality food served with the clinical Belgium precision we had come to expect over the years. It is not a big place, and can get crowded. We arrived on the Friday 29th March 2002, but as it was for a pre-planned tour, they were ready for 30 very thirsty English ale-heads - and they really looked after us. Memorabilia is available on the premises, most of which is festooned with the impish looking Troll, the symbol of the first beer brewed.
A Great Bar. If anything it just needs that little bit more &#8220;wear and tear&#8221; before it will no doubt come to have that aged, homely feeling. If you fancy a very short walk and (much) more beer, pop round the corner, and down the steps to the Creperie Bretonne (see Beerfly) for a superb selection of 200+ Beers.
Last Visit 3-29-02.

This is the Dubisson brewpub. Typical brewpub look. Open 1 month and 1 week the first time I arrived-I was actually there to go to Creperie Bretonne. There is only 1 beer actually made at the brewpub, the Trolls beer. Brewery was very modern, though again with lots of brick. Beers served way, way too cold. Some of the drafts were dissappointing, but it is pretty unusual to see Bush on draft at all, and Bretonne is also very worth a visit, so I shall probably come back again.