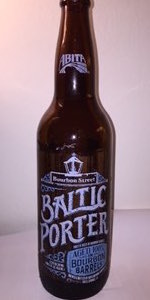 L: Brown with a finger of off-white head
S: Light darker and juicy fruits with a hint a bourbon. Mild strength smell but a good one.
T: Once again, mild flavors....but good ones. I get a little bourbon, a little sweetness.
F: Very light and thin for the style. The worst aspect of the beer.
O: Easy drinking, and it's over 9% with a decent bourbon flavor.

Appearance: A slight gusher but I caught it in time; the beer pours mahogany with a creamy ecru head; drapes a layer of lacing

Smell: Caramel, toffee, coconut and vanilla prominent, with the Bourbon building underneath

Taste: Caramel and toffee, up front, with the coconut, vanilla and Bourbon tones building; the Bourbon builds in harshness, after the swallow, with the finish otherwise being rather sweet

Overall: Not sure what to make of this beer as a Baltic Porter it is not; others have suggested an English Barleywine but the mouthfeel is too thin and the hops are too muted; perhaps a Strong Ale does the trick; not a bad beer though the Bourbon treatment was not deftly handled

Pours an opaque dirty orange-brown with a foamy dark khaki head that settles to a partial film on top of the beer. Small streaks of lace form around the glass on the drink down. Smell is of caramel, toffee, brown sugar, coconut macaroon, wood, and slight bourbon aromas. Taste is much the same with caramel, brown sugar, coconut macaroon, bourbon, and wood flavors on the finish. There is a mild amount of wood bitterness on the palate with each sip. This beer has a lower level of carbonation with a slightly crisp mouthfeel. Overall, this is an above average beer with solid bourbon barrel aged aromas, but the flavors are a bit muddled and I am not getting any Baltic porter qualities from the base beer.

Very thin, light bodied porter. The barrel was not well integrated leaving it very unbalanced and falling short of expectations.

Best bourbon beer I've ever had

I was really surprised by just how much bourbon this took from the barrel but it's almost like boilermaker. Light fudgey chocolate malt body with a thinner feel. It finishes with a more alcohol laden whiskey taste. It's an enjoyable beer if this is your sort of thing.

Pours a medium brown body, a bit translucent, one finger offwhite head with fair retention time, no lacing. Smells of whiskey; vanilla and oak aromatics permeate the nose, but at the same time it seems to be a bit muddled. Not much of the base porter comes through. Flavour is similar, mostly mellow whiskey, vanilla, oak, smoke and not a whole lot of the base beer comes across. Still, it's a nice whiskey flavour so I can't complain too much. Mouthfeel is thinner bodied, lower carbonation, pretty average for the style. Finish is mildly warming whiskey. Overall, a decent whiskey aroma and flavour but the base doesn't seem to stand up to the whiskey. Still a decent beer to try.

Enjoyed on tap at Wino's And Taco's in Covington, LA

Not what you'd typically expect from Abita, obviously they aren't known for their barrel aging. This should change soon as I saw the room where Abita plans to expand their barrel aging program very soon. (should even see bottles of BA Stout as well at some point) The color was a dark brown and their was no head or lacing. The mouth feel was pretty thin honestly but that's not a bad thing. It smelled wonderful (bourbon, raisins, chocolate, etc), like you'd expect from a beer aged in Pappy Van Winkle Barrels. The taste was sensational and tasted much like the smell, chewy raisins, vanilla, subtle oak, a slight oxidation but just the right amount to give it nice complex quality. I was told it was only aged for 3 months but boy did this beer take to the barrel well. I hope they consider doing this again as it was a homerun in my opinion.