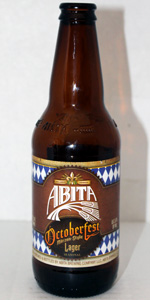 Notes: This full bodied malty lager has a copper color and is hopped and dry hopped with German Hallertau hops giving it a pleasant, spicy hop aroma that's just right for the season. 24 IBU Color 12 SRM.

This beer pours and looks beautiful. The aroma was clean and malty with some yeasty aroma mixed in. Taste was moderately malty with some hops coming in at the end of a dry finish. This beer should be medium bodied but I found it to be thinner and lighter bodied than a typical Oktoberfest. Overall a pretty good beer.

12 oz bottle into a wine glass (An Oktoberfest in late November? In a wine glass? MADNESS!)

Appearance: Pours a copper color. The head is a finger high, with an off-white shade and nice consistency in its texture. Retention is pretty solid, as well. A ring of lacing is left on the glass. (3.5)

Smell: Mild notes of caramel and bread appear. It seems to be slightly hoppier than the average marzen - and honestly, I like that. Like many Abita beers, it hits the basics of the style well enough without being as intense as it could or should be. (3)

Taste: As the nose suggested, it's slightly hoppier than many fest beers. Here, it's a double-edged sword - its initial bite is pleasant, but morphs into a slight harshness (thanks to the intense carbonation, it seems almost carbonic). The caramel-laden maltiness is subdued throughout. All in all, it's too mild tasting throughout. (2.75)

Mouthfeel: In terms of lightness and drinkability, this beer does well - most Abita beers tend to. It's very well carbonated, as expected. I'd even call it somewhat harsh. But hey, it's drinkable, right? (2.75)

Overall: As a marzen, it's just too weak to be a good example of the style. Having said that, it's not without redeeming qualities: it's nicely hoppy and *very* easy to drink. Still, I'd rather drink other examples of the style. (2.75)

Light hop, biscuit and toffee nut nose. Malty, nutty, grainy, biscuit and tea leaf flavor but it's washed away in a harsh, carbonated bite. Certainly feels like a lager but is absent of the caramel, toffee sweetness of an Oktoberfest.

Scratch your Octoberfest itch with this crisp copper selection that brilliantly passes itself as a Munich native. A soft nose transforms into a malty flavorful mouthfeel with a slight bitter finish. Slight lacing lines the glass and the foam quickly dissipates allowing one to sip or consume quickly.