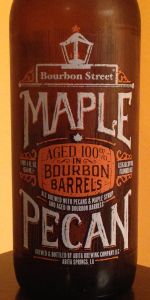 Notes: Bourbon Street Maple Pecan is a nut brown ale that is aged in Bourbon barrels. Our Maple Pecan is brewed with a combination of pale, munich, biscuit, and caramel malts. Roasted pecans are also added to the brew for a nutty flavor and aroma. We add maple syrup in the brewhouse as well to give the beer a sweet flavor and full body. After fermentation and aging the beer is transferred into the bourbon barrels. It is then aged for another 8 weeks to absorb all of the flavors from the barrels. The result is brown ale that blends the light flavors of nuts, maple syrup, and baking bread from the beer with the warming flavors of wood and vanilla from the bourbon barrels.
View: More Beers | Place Reviews
Recent ratings and reviews. | Log in to view more ratings + sorting options.

650ml brown glass bottle with a pry-off cap nabbed at a beer store in New Orleans, LA for $5.99 USD plus tax.

Aroma is all fake nut extract and generic malt sweetness. Has an off-putting buttery character to it. There is nothing recognizably maple or bourbon in this aroma.

Taste follows the aroma. Has a buttery coating mouthfeel with nut oils and subdued pecan working their way in without contributing much depth of flavour. I don't taste maple syrup or bourbon (barrel). No oak, no vanilla/vanillin, no barrel sugars, no toasted coconut...whichever small batch bourbon formerly filled those barrels ain't contributing anything to this brew. The woodsiness you'd expect in a beer that plays with both oak and maple is completely absent. Honestly, I wouldn't know this was barrel aged if I tried it in a blind tasting and I'd put money against any experienced drinker making that observation. A waste of a barrel aging program, but then I guess the "months" it spent in barrels could have been two and the "small batch bourbon" could have been shit.

The pecan is not particularly vivid or evocative. The base beer is very generic...2-row, caramel, that's kind of it.

Drinkable but dull. Not what one hopes for in the sense that it's a bourbon barrel aged maple syrup pecan ale that doesn't really evoke bourbon or maple syrup, and lacks much vivid pecan flavour.

I mean it hides its ABV decently, but it's far from great. I prefer their straightforward bourbon imperial stout, but this is probably still one of the brewery's better beers - though that says more about the brewery than it does this beer.

Bourbon barrel good. Getting a different feel/taste but not catching maple our pecan.

I really like this beer. Very surprised by the lower BA rating. My bomber poured into a tulip had gods head with lacing. The bourbon is there but not at all over powering. I taste the maple, but it is not syrupy. Great finish. I wish I had bought more than one bottle. Sorry but not even sure where I bought it. Probably Total Wine.

Poured from the tap into a tulip glass. The appearance is a semi clear brown color with an almost non existent head. The aroma is maple. The taste follows the nose.

L: Poured from a bottle to a pint glass. Had a medium brown color and a hazy texture. There was a small amount of creamy, off white head that quickly dissipated. Fair lacing.

T: Tasted of a whole lot of malt (very much omnipresent), a tinge of bourbon (not nearly enough), a little bit of vanilla, some pecans, a hint of maple syrup, and a bready quality. This is a great idea for a flavor, but it doesn't come off. None of the ingredients seem to be powerful enough. A little weak.

F: A decent amount of carbonation with a dry finish. Medium-bodied.

O: Kind of a missed opportunity with this beer. Could have been a bit better.

From the older bottle, it pours a clear brown with a modest head, soon reducing to a ring. Some nuts and a touch of maple in the nose....and mouth. Interesting beer.

Not my thing, ive had lots of different whiskey barrel beers..

This taste like watery bourbon, just buy some good tasting bourbon instead of this beer imo.

Nose of the barrel.

Taste is sweet, neither maple nor pecan come much in to play, but the bourbon barrel is delightful. Not unlike aged scotch ale.

Mouth is a little shallow, leaves you dry.

This type of taste has been done better elsewhere, but it's something to try more than once if you like barrel-aged ales.

Pours - cloudy brown color decent off white head that dissipates quickly, no lacing at all.

Smell - The first thing i smell is the bourbon the maple is pretty subtle but is there I also for some reason get a little coconut after taste. Also a little bit of oak.

Feel - The feel is a bit too thin, slightly dry on the finish.

Overall - A decent beer wished for a little more maple and pecan.

A: [4.00] Big two finger head. The head is off white and is comprised of small to medium bubbles. The beer is a cloudy brown color. The bottle lists the ABV (8.5%).

S: [2.75] I expected a lot of nose on a Bourbon Barrel aged beer. I am getting almost nothing.

M: [3.25] Medium body and carbonation. No lingering flavors. No hint of alcohol.

O: [3.00] Big disappointment. I am starting to really like Brown ales and I figured a barrel aged version would enhance the flavor. This has no nose no flavor it is just way below average.

Smell is prominent maple syrup, a hint of pecans, and bourbon barrel.

Taste is pecan and bourbon malt up front, with a maple finish that is very sweet. Bourbon flavor is more prominent as the beer warms. Mixture of flavors does not go as well together as I thought it was going to.