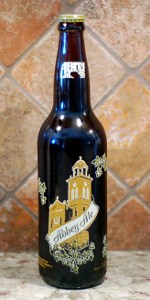 Notes: Abbey Ale honors the ancient tradition of monks who perfected the art of brewing beer to support the monastery and their "liquid bread". We offer up our support and thank them with a 25¢ donation to St. Joseph's Abbey with every bottle sold of this heavenly brew. Dark amber in color, the aroma of caramel, fruits and cloves invites you to contemplate the creamy head of this "Dubbel" or double ale. Abita Abbey Ale is a malty brew, top-fermented and bottle aged to rapturous perfection.

Pours out a rich dark red amber with a frothy tan head that sticks throughout the beer and has nice lacing.

Smell. My first whiff of this one right out the bottle had a sourness that scared me...already a bad bottle? But after pouring it out, that sour bit that i got left, and the aroma is nice. Has a nice sweetness that is smelling like both candi sugar (i get a little candy cotton) and a sweet fruitiness (ripe strawberries is what i get there too). Though i dont get the sourness i first got, there is still a touch of tart that i get, but it goes well with the sweetness.

Taste. The beer stays sweet, but is not cloying (i thought from the aroma that this one could have been a bit too much on the sweet side). The sweetness turns a little bit more on the caramel side and the fruit flavor sticks from the aroma, as i still get a strong strawberry flavor that is accompanied with some tartness. I also get a creaminess from the flavor, which has a little banana to it. I also get a small clove flavor after a second but it does not linger. As it warms in my mouth the flavor turns more earthy. There is a good spiciness that accompanies the cloves that i like; good yeastiness.

Mouthfeel. Body is rather creamy and on the fuller side of medium. I'm a little surprised as I am not getting that much carbonation in this one. Has a nice balance.

Overall, i plan on buying this one a lot, especially with the price i got it at being at $3.69 for the bomber. It is a refreshing dubbel that still carries a complexity and spiciness to it. I don't think I'd say its an incredible dubbel, but it still is pretty tasty. I am finding myself drinking this one rather quickly; the presence of alcohol is low and the drinkability is quite high.

Hazy amber with a thin cream-colored head that remains. Good lacing as it goes down.
Smell is spicey roasted malts with some Belgian yeast. Brown sugar, raisins, figs, as well as some pear, clove, and banana. Caramel as well.
Taste is Belgian yeast and dark, spicey malts. More brown sugar, caramel, clove, as well as some banana, pear, figs, and raisins. Finish is malty with some more buttery Belgian yeast that hits the back of the throat.
Mouthfeel is slightly crisp and tingly, from the medium level of carbonation. Finish is very engaged and slightly dry, with the carbonation working to the end. Medium-light body.
Drinkability is okay. The sweet-spicey aspect begins to take its toll about halfway through, making the bottle a bit hard to finish.

This was a great ale!

22 ounce bottle to snifter
A:deep brown weak head
S: lots of over powering yeasts
T: yeasts not much else
M: good feel, with a sweet finish.
D: hard to drink i poured out about 16 of 22
ounces this was no where near the doubles i have had
please pass on this one.

Finally back to reviewing after a bit of a break (OK, like a year). I decided to start back now that higher quality beers are now available in MS. Poured from a 22 oz bomber into a Yazoo pint glass.

A: Pours a clean mahogany, completely clear. The head is off-white and pretty fluffy. Very mild lacing. No real sign of bubble streams (which is odd considering the mouthfeel).

S: The aroma of dark, sweet bread is the overwhelming note here. I don't really get any fruit notes that I would expect from a Belgian style, nor do I sense any hop aroma at all. It pretty much has a standard "beer" smell, just amped up with some darker malt.

T: Ah, there's the fruit. The backbone of this beer is all about raisin bread. Lots of dark fruit, a little bit of caramel, and maybe even cinnamon. It's pretty sweet and a little buttery on the sides of the tongue. As with the aroma, the hops don't really show up to the party.

M: A little light on the palate for an 8% beer. This beer seems to be a little too heavily carbonated for my liking (I don't think it's bottle conditioned). Also, there's almost no finish. The taste and feel of the beer just "end" at the middle of the tongue.

O: Abita Abbey Ale is enjoyable if not challenging. I think Abita did justice to the dubbel style, and it's cool that they donate profits to a local abbey. In sum, I think some extra work with the recipe could tweak this into an amazing beer.

22 oz bottle cost me $4.95, poured into the widest wine glass I own (took about 3 pours to finish the bottle).

Crisp and prickly up front with toasted notes, yeasty sweetness, spicy hops, clove, leaf texture. Very smooth hops bitterness washes away nicely with a friendly yeast flavor that lingers. Hangs around like a tasty wine, only better. Grows creamy as it warms. Depth & character shines through this one.

Poured vigorously into a snifter; about half filled.
A: Amber to a ruby red color. Nice head which dissipates and hovers over the body of the beer; leaves a fine lacing.
S: Malty with strong fruit.
T: Bready with a quick lead-in to malts and overly sweet fruits.
M: Light carbonation over tongue.
D: Sweet and fruity, my initial reaction was poor, but the beer grew on me. High alcohol content is noticeable, but mostly masked by sweetness.

I was excited to find this bottle in SE CT since I'd only heard of Abita, but I found this beer a little lack-lustre compared to other abbey style beers. It was too sweet and I was turned off by the initial bready taste. I'm definitely excited to see what else Abita has to offer.

Nose was instantly sweet, lots of floral and earthy notes, a little more than I thought it should.

Taste was as a thought, sweeter than I was hoping for it tasted...well cheap honestly not like a true abbey ale...there was one flavor also that didn;t seem to belong, not sure what, some kind of flowery or herbal taste.

Not a true abbey ale in my opinion but still an alright beer in general.

Picked up a bottle of this with a little bit of excitement and curiosity. The beer poured out as a light brownish color with a foamy white head on top. The smell of the beer gives off some light floral aromas, Belgian yeast, and some grains in there too. The taste is soft and tasted pretty close to a traditional Abbey Ale. The mouthfeel was soft and smooth. Overall it was a pretty decent brew. I wouldn't need to have it again but I'm glad I tried it.