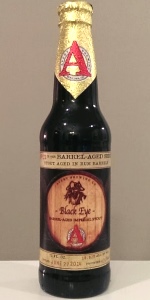 S- Big on tobacco and oak. Bready, toasty and some solvent aroma. 4.25

Poured an almost pitch black color with 1-to-2 fingers of rocky, tan head, which thinned out rather quickly. Very sporadic wet lacing spots on the sides of the glass. Below average retention. (Sight - 3.50)

Taste was initially all over the place, but then settled down. Got chocolate malty syrup, followed by an immediate boozy wallop. That led to a warming finish all the way down my stomach. Other sips lead to caramel, toffee, crayon, faint coffee malts, chocolate milk, rum, slight bourbon and some smoky dark chocolate. (Taste - 4.25)

Just a really good Imperial Stout. So damn smooth. All from Nick, but I’ve got it Uncle Jacob’s Stout, Black Eye and Tweak in that order. (Overall - 4.50)

Was just too boozy for me. Clouded my ability to enjoy the flavors.

I like how this smells, and I like how it lingers, but in between is way too harsh and boozy.

Served chilled into a snifter.

HEAD: Gorgeous shining complexion. Dark khaki-tan colour. Not as creamy, soft-looking, or even robust as would be ideal; it's a bit thin. Recedes within 3 minutes (which is pretty damned impressive at ~19% ABV). Leaves no lacing as it recedes, but I can coax out some streaking brandy-like legs by tilting the glass.

BODY: Predictably, it's an opaque solid black. No yeast/lees visible within.

Appears aptly carbonated. Not a unique or special appearance for a rum barrel aged imperial stout, but certainly appealing.

AROMA: Boozy rum leaps out of the glass, evoking toasted coconut and sugarcane, but no rich white oak. The barrel character eclipses any aromatics from the base, drowning out any notes of dark malts and chocolate malts. I think I find some walnut and/or nougat?

Suggests a chewy boozy beast of an imperial stout with wanting intricacy and subtlety of execution but decent depth of flavour. Aromatic intensity is mild.

TASTE: Tannins and dry wooden tones are present from the get-go, making this imperial stout drink less than clean. Boozy throughout, making one wonder why Avery insists on skyrocketing these 12 fl oz releases through the roof; wouldn't this be better with less heat?

Rum barrel has soaked into the chocolate malts and dark malts at the heart of the beer, but it isn't a harmonious marriage of barrel and base. There isn't egregious clashing, but it lacks the neat cohesion of the best barrel aged imperial stouts and the flavours do seem to be fighting to see which can emerge as loudest. More subtlety and delicate execution would be nice, but it isn't imbalanced in spite of failing to amount to a true gestalt whole of a beer; it's neither too sweet nor too bitter. But the wood tannins are rough and distract from the more conventional imperial stout notes.

Speaking of which, this is pretty simply constructed. No roasted barley, no charred/burnt sugars, no barrel char, no subtle toasted coconut, no coffee or other adjuncts. In a style that includes some of the most intricate beers in the world, that's pretty disappointing.

TEXTURE: Awkwardly dry and rough on the palate at times, evoking stale dried-out wood in combination with the underwhelming barrel flavours. Overcarbonated. Hot and boozy. Heavy and thick on the palate, with a borderline syrupy feel. The chewiness is right for the style, and I don't mind the booze as much as many might, but the lack of a soft silky feel or adequate creaminess makes it less approachable than it could be. Definitely a filling mouthfeel. Not tailored specifically to the flavour profile. Fails to elevate the beer as a whole or to accentuate specific notes.

OVERALL: More drinkable than its ~19% ABV would lead one to expect but less drinkable than the best expressions of the style (and amost any "average" beer regardless of style conventions), Black Eye is a booze-ridden brew that suffers from a lack of seamless layering of barrel and base. Not a unique or special imperial stout, and the base is in serious need of work in terms of complexity and depth of flavour. I adore many of the beers in Avery's barrel aged series, but this is not amongst their strongest efforts by my estimation. I'll enjoy finishing the bottle, but boy am I thankful this rich beast of a beer isn't packaged in bigger format bottles; it'd be a chore at anything above 12 oz (and I find myself wishing I had company to share this with).

I'd like to see a gooey, chewy mouthfeel with more silky softness, as well as a flavour profile with more intricacy and depth of flavour in addition to a more appropriate choice of barrel. The strengths of rum barrels aren't explored here (which is surprising given Avery's control over rum barrels in beers like Rumpkin) and I continue to question Avery's obsession with hugely alcoholic beers.

Rum chocolaty goodness. Probably best to split your bottle. Have at cellar temperature.

Bottled June 27, 2014. Poured in a snifter, the beer is jet black, oily, and pours very thick. Trace halo of tan head. Aromas of rich bittersweet chocolate, heavy molasses, bitter roasted coffee, a heavy blast of boozy heat, earthy highlights, subtle wood char, and hints of vanilla. Flavors are heavy and rich molasses and bittersweet chocolate forward, with a solid cream highlight, and a blasting booze warmth in the backbone. Some earthy highlights, with a steady dose of char throughout to bring some edge to all of the richness. Slick, robust, full bodied, with a building warmth supporting a richly sweet and slightly charred aftertaste. The finish is slick, with a lingering, full bitter roast and boozy blend. Truly fantastic beer!

pretty insane they avery can keep pulling off enormous beers like this one. impressive stuff, i think a second try at the widely infected black tot from a few years back. this one has no infection issues at all, and is one of the strongest beers out there right now. the rum barrel character is intense, as much of that as you can pack into a beer, and the base stout is a freak of nature as well, with so much body and dense dark grain character. not sure what yeasts they use to get it to this level of abv, but its astonishing that there is no yeast flavor or residuals to the beer hardly at all. burly black malt base with notes of burnt wood, licorice, and dark dried fruit, maybe some plums too. there is a mild spice from the rum and a lot of that raw cane sweetness still, there is enough sugar in here to get it up over 20% abv with some hectic yeast. the flavor experience is one of the longest in beer too, ashy rich chocolate malty base moving into the richness of the rum and the softness of the oak, before a slightly harsh alcohol sting comes in with a vanilla brown sugar finish. the alcohol is as intense as expected, but the flavor of the beer is so deep and complex it keeps me drinking it on the quick. glad i scored an extra bottle to lay down for awhile, i bet this one will evolve pretty nicely. one of a kind, thats for sure.

edit: maybe waited too long to open my remaining bottle of this, a 2014 vintage, perhaps the last time this was made. its faded a lot, thinned out, got somehow packed with sediment, and still seems as boozy as ever, even if some of the sweetness i remember from when it was fresher has mellowed out. everyone else in our group drinking old avery bottles thought this was challenging, and i kind of agree. a permanent marker thing going on, weird minerals, oxidation, and black tea notes, molasses and chocolate too. its just old and big, and i think has lost a lot of what made it so intriguing when it came out. not objectively bad by any means either though, i just think its past its moment even though its huge leaving original scores in place.

Opened my bottle almost exactly a year after bottling. Still way too boozy. Cloyingly sweet. It does get better as it warms up. If only I had waited another 8-10 months.