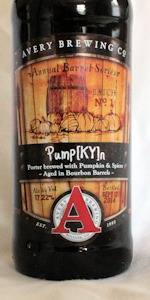 This beer pours a goopy, murky, very dark brown colour, with one finger of tightly foamy, almost cake-batter-esque head, which maintains some ultra-sturdy retention, eventually leaving a bit of ski-hill profile lace around the glass.

The bubbles are present, to be sure, but mostly in a merely supportive and structural manner (the guy you marry, vs. the guy with whom you spend Spring Break), the body, well, ripped is the best word I can come up with, because it is solid, heavy, and tight - and pretty smooth 'n creamy, even with all those spice and alcohol esters mucking about. It finishes sweet and punchy, the cocoa-tinged caramel malt starting to assert its provenance, as the pumpkin and its spiced friends exhibit the turkey tireds, and the barrel notes keep on keepin' 'er between the lines.

I have to admit, I was more than a wee bit trepidatious before opening this monster of a beer, but once I became resolute, it really isn't all that scary - due in no small part to the deft hand(s) who crafted this. It really is quite porter-like, if you discount the initially heady pumpkin, the spice, and the Bourbon character - I know that sounds fairly spurious, given how big and varied this offering is, but overall, what we have here is a tasty, full, and incredibly warming pumpkin ale.

There comes a time when a BA'd beer takes on too much B, and this is one of those times.
A promising start; rich dark body (although thin head) and rich aroma. But the aroma starts to burn and persuades the entire beer towards the spiced rum section. It kind of tastes like Kraken black rum, but too light for rum, too hot for beer. Its lack of malty richness doesn't save it and the spices muddle towards the end.
(and no pumpkin hints at all)

T: Follows the nose, some boozeyness & nutmeg, some plums up front. Nutmeg & cinnamon, mixes with a little booze, some raisins as this warms. Finishes a little dryness, boozey, some cinnamon & a little squashyness

Drinks alright, probably could stand a few more years of aging. cinnamon is a little overdone

I jumped at the opportunity to taste this on tap at Pearly Bakers, in Easton PA. I have never had a barrel-aged pumpkin beer before... I suppose it was only a matter of time. My review is from notes while experiencing it there. The appearance is a deep brown, not unlike cola, with a creamy froth sitting on top as if it were a cafe latte. The size of this head, over 1" tall, almost seemed as if it were from a beer on nitro tap... Quite incredible.

The aroma is delightfully sweet, containing vanilla, maple syrup, and brown sugar notes. A sharpness from the alcohol and spices is hinted at as well. After a small sip, this beer makes it's presence known on the palate in an almost overwhelming way. The bourbon is extremely intense, however, mixes well with the pumpkin, cinnamon, allspice, and nutmeg elements. Any hop or roasted malt characteristics are downplayed and underneath these flavors. The mouth feel and the body of it is not unlike robust stouts, for example Avery's Mephistopheles, BCBS, Brooklyn Black Chocolate Stout, and Ten Fidy, by Oskar Blues.

Overall, this was a powerful and luxurious libation to enjoy. It sips like hard alcohol, so be prepared and be careful. Those who are familiar with any of Avery's other offerings should be well aware of this, and should also find this to be a worthy entry into their catalog for tasting.

A: The beer is very dark reddish brown in color. It poured with a short off white head that died down and left a small patch of bubbles and some wispy lacing on the surface along with a collar around the edge of the glass.
S: Moderate aromas of pumpkins and bourbon are present in the nose along with associated notes of vanilla. The smell of bourbon becomes stronger as the beer warms up.
T: The taste has flavors of pumpkins, pumpkin spices and bourbon, the latter of which contributes lots of vanilla.
M: It feels medium- to full-bodied on the palate and has a moderate amount of carbonation.
O: This beer tastes nothing like 17% abv because it hides its alcohol very well and tastes more like something that is 11%. The only hints of the alcohol you get are from the heat.

Clear burnt umber body with rufous highlights. A smattering of foam dissipates to a vague ring before I can evaluate its color. Poor retention, but marvelous legs.

Pumpkin, tobacco, vanilla, and cocoa in the nose - mysterious but potent aroma. Dark fruit, leather, and some lush barrel notes with maybe a touch of clove and brown sugar - very inviting.

Sweet palate entry, malty with hints of maple candy or toffee. Clean, low bitterness from hops, and a big, unctuous, warming but not quite boozy note emerge in the finish - the bourbon notes linger and are punctuated with the pumpkin and low levels of spice. Well integrated like some sort of Autumn themed cocktail.

Medium-bodied, vaguely oily mouth-feel with low but sufficient carbonation. For such a high ABV, the alcohol doesn't stand out.

Rating to style, this is one of the better renditions of a pumpkin beer I've sampled - although, at more than $1/oz, it is best reserved for a special occasion.

this is obviously something special, all of the big avery stuff is, but this one is real unique as strong beers and pumpkin beers each go. porter is a cool base for this, the darker grain brings a lot to the table in terms of flavor depth, and does a good job balancing the pumpkin flavors. the beer is a muddy brown color with no head at all. its about as thick and syrupy and one would reasonably suspect, but the texture in the mouth is more slippery than sticky, and as diabetic as this beer is on a sugar scale, it doesnt feel teeth rotting in the end. pumpkin flavors are secondary to the bourbon, which is anything but subtle. sweet vanilla and oak and indeed some booze are tasted even above the dark malts. its not as complex as some others in the big barrel series, but i think its integrated all the elements really well. my issue here is than i can have about 4 ounces of this and i need to move on. its too sweet and strong for much drinking, and i think a more robust yeast strain would have taken this thing well over 20% abv, given the remaining residual sugars. overall a must try, all of these are, but maybe one i wouldnt buy again by virtue of its absurdity.

look: nearly opaque Ruby. Slight tan head. Oily lacing coats the glass but recedes quickly.
smell: Very sweet, molasses like notes, balanced with a deep porter roastiness. Some bourbon and oaky vanilla. Hints of aromatic spices. I recall these as more prominent when i drank a fresh one.
taste: Much like the nose. Quite sweet up front but a drying roastiness balances a bit. Sweetness wins but it's countered nicely. Still a bit hot which is unusual for big Avery beers in my experience, but not a hit on the taste at all for this one. Still amazingly smooth for 17.22%. Also helps balance the sweetness. Killer.

Bottle shared by RussianDragon. Thanks man.

Chestnut body with a light beige head. Aromas of rum, oak, Fall spices, cinnamon. Boozy, spicy, squash. The aroma displays a gargantuan alcohol presence, but the finish is astoundingly gentle, given the 17.22% abv. Subtle chocolate notes. Medium bodied with low carbonation and sticky on the palate. Quite tasty.

By far best pumpkin beer I've ever had.. as smooth as silk, great bourbon taste/smell, just right amount (faint) pumpkin spice flavor... right up there with Uncle Jacob's Stout which had side by side with this same night.

12 oz. bottle poured into a snifter.

Taste - Whoa. Spicy up front. Then some bourbon. Sweet and pumpkin in the middle. Some dark malts and then a crazy amount of spice in the finish.

Overall - I don't know about this. It's unpleasant.

Poured into a Fremont small snifter. Pours a very dark mahogany brown, appearing black in the glass with a thin, light brown head that dissipates quickly to patches, slight lacing. Rich aroma of bourbon with light pumpkin pie and toasted malt, kind of like a pumpkin pie swimming in bourbon. Flavor follows with quite realistic pumpkin pie melded with semi-sweet dark toasted malt and lost of bourbon. Medium to heavy bodied with light creaminess, mild carbonation. This really tastes like taking a bite of a good, not oversweet pumpkin pie and chasing it with a small taste of bourbon and a swig of sweet stout. Very nice. Not much fresh pumpkin, but the pie is nailed. Dessert in a glass. The bourbon is assertive, but this really hangs together perfectly with no component out of place. Ultra ABV well covered. Delicious and deadly.

Smells of ethanol and pumpkins. Tastes like pumpkins and spices but as if the spices weren't dissolved and are just floating in the liquid. Feels like you are drinking syrup. Pretty terrible beer in my opinion.

Smelling pumpkin spice, vanilla and pumpkin(vegetable). Not getting any bourbon. Lots of dark fruits(raisin, prune, dark cherry), chocolate, burnt caramel. Getting a weird sweetness, almost medicinal. Huge alcohol heat warming my chest. Getting better as it really warms up.

Holy hell... wasn't expecting this. I mean, it's Avery sure. They don't do anything subtle. But damn. This is quite the pumpkin beer. Looks copper color. Like liquid pennies. Smell...well. Wait until you bake a pumpkin pie. Exactly like that. Nailed it there. Taste is of pumpkin, spice, maple, black licorice, cinnamon, nutmeg. Feel is thin in my option but I'm pretty sure that's due to the barrel. Overall. Try this monster. I shouldn't be drinking it by myself but well.... I am.

S: Very boozy, but behind that I get molasses, coffee, vanilla, and that pumpkin.

T: Some good things going on here. First off, there's that evident hot, booziness that's expected. Quite sweet, but not overwhelming. There's a good complexity of flavor that consists of bourbon, molasses, vanilla, nutmeg, cinnamon, and pepper. Can't say I notice any actual pumpkin, but the spices are quite bold.

O: I've never been a fan of pumpkin beers, but this one may have changed my mind. Perhaps it's the absence of actual pumpkin flavor, I don't know. A big beer for sure at over 17%, but drinks rather well. Very tasty and complex. The $12 price tag is high, but there are no regrets here.