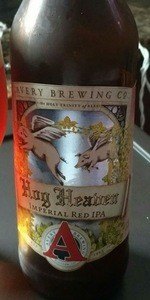 Or is it hop heaven? This dangerously drinkable garnet beauty was designed to satisfy the most zealous hop devotees. Intense bitterness and the dankest of dry hopped aromas are intertwined with a rich caramel malt backbone. Oink!

The smell is immediately hops, with grapefruit and pine the smell is resinous and almost dripping with the hop profile. Past the hops is a light fruity sweetness backed by some malt backbone but that seems to be in the background of the experience.

The taste is slightly less bitter than I expected it to be based on everything I've seen so far. Definitely strongly bitter, but it has more than that. For what it I would agree it is dangerously drinkable. The grapefruit translates a bit into the flavor as I was expecting. Light malt sweetness, but its largely covered up by the hop body.

The feel is just as big as the flavor thick and creamy it will definitely fill you up but I'm sure you dont need that many of them to get the job done.

Overall an interesting experience. As not a hop head I was a little intimidated to try this one but the flavors come through and the bitterness was much less than I was bracing for. Not necessarily one I would revisit but I'm glad I tried it as it is a legacy release and the quality is there.

3.64/5  rDev -7.8%
look: 4.25 | smell: 4 | taste: 3.5 | feel: 3.25 | overall: 3.5
$ 22.00 (Including tax)/six-pack of 12 oz cans ($ 0.305/oz) from Franklin Beer, Franklin, PA. Reviewed 11/30/18.
“Canned on 08/14/18” on bottom of can. Stored upside down at 42 degrees and served at 42 degrees in a hand washed and dried Jester King snifter.
Appearance – 4.25.
Body – Amber, hazy.
Head – Large (Maximum six cm, aggressive center pour), off-white, low density froth, good retention, slooowly diminishing to a four mm ring and a heaped partial layer. Multiple pieces of torn lacing remain as the head retracts.
Lacing – Excellent. In addition to the above, as the level drops, a wide, somewhat thick, band of tiny to small bubbles emerges, displaying stalactites and connected to the next band by thin columns.
First pour – Dark gold, clear.
Aroma – 4 - Citrus flowers and pine initially. This morphs into caramel maltiness.
Flavor – 3.5 – No citrus or pine (as suggested by the nose) are present. There is a bit of caramel malt which ends slightly bitter. Several minutes after swallowing, a mild gastric warming occurs. No alcohol (9.2% ABV), no diacetyl, no dimethylsulfide.
Palate – 3.25 – Medium, approaching creamy, almost lively carbonation.
Impression and interpretation – 3.5 – When I first had this back in August 2010, it was a barley wine. Now Avery claims that it’s an “Imperial Red IPA”. So, did they added more hops to their barley wine formula or did they tweak their basic formula to try to make it more of an IPA? Either way, IMHO, they lowered the quality and made a brew that’s overpriced and neither fish nor fowl.

Reviewed by SLeffler27 from New York

The aroma opens with a strong, sweet, caramelized brown sugar. Floral hops give way to a pleasant alcohol while warmth brings out pinesap.

Bitterness is high and contrasted by equally high sweetness. The flavors generally follow the nose with emphasis on the caramelized sugar that is just short of burnt. Warmth reveals dates, while a long finish has modest strength playing to the caramel and alcohol.

The alcohol is as expected and just short of warm. The silky texture and full body allow fine carbonation to transition from prickly to creamy. Residual sugars are less than expected.

This is a sipping beer that reveals progression with warmth. I will finish this while reading and snacking on creamy Bleu cheese. Much thanks to Rodney and Louise.

Rated by sunsjammer from Arizona

Reviewed by Rogerlb from California

Can is marked 7/31/17, and it's 10 months later but it's a barley wine so it should age well (he said, hoping).... It pours a clear amber and boy oh boy that smell is barley wine with a capital B. Sweet malt, some hops, really good rich promise. 2 finger head slowly dissipates, slower than I'd expect for a 9.2%.

Taste is sticky, caramel, dank and bitter. 10 months on the shelf have not diminished the hops much. Dry-hoppiness, an earthiness like fuggles (?guess?) grows as it warms. This certainly has more body and mouth feel than most ambers you might be used to, regardless of what it says on the can.

It's boozy, because it's Avery. Really fits into barley wine style by taste. So rich and malty, calling it a red is simple description. Maybe closer to a DIPA without the cloying sweetness. Quite a chewy brew and a bit loud.

Reviewed by KLHBB from Arkansas

4.17/5  rDev +5.6%
look: 4.25 | smell: 4 | taste: 4.25 | feel: 4 | overall: 4.25
From notes 10/5/12: Pours murky brownish/reddish orange with lots of particulates swirling about. Remarkably the brew clears as it warms, about 25 minutes into the drink. The pour produces 2 strong fingers of moderately lasting, creamy, chunky, tan head that leaves moderate stringy, webby lacing. Aroma is caramel, vanilla with pine resin and citrus hops. Taste is boozy, rich caramel malt sweetness balanced with spice, wood, cedar, pine and citrus hops up front with the hops dominating by mid-sip; becoming full throttle by the finish and tongue numbing delightful in the aftertaste. All in a very earthy/dank undertone. Alcohol pervades the sip. Starts predominately sweet for a millisecond before it turns hoppy; finishes dry, extremely hoppy and bitter. Might be described as Dogfish 90 Minute IPA on hop steroids. Going into this blind I would have guessed to be a Imperial (Double or Triple) IPA, but other than alcohol and intensity I'm not sure what defines it as am imperial Amber/Red Ale. Mouthfeel is medium-full bodied and nicely carbonated, tongue coating and sticky it is silky to creamy yet a little prickly. Astringent.
May 28, 2018

4/5  rDev +1.3%
look: 4 | smell: 4 | taste: 4 | feel: 4 | overall: 4
Form the 11 oz bottle in a snifter. This nice ale pours a deep moderately murky
red tinged brown with a nice head of off white foam that settles to a thick ring, nice
chunky layer, and displays some very nice lacing. Nose of rich caramel malts with
orange zest, pineapple notes, heavy pine, and floral hop notes. Flavors show depth
of use of the hop field with pine and citrus hops showing notes of orange and mango
with floral and herbal hops rounding out the back of the taste with rich caramel malts
and a touch of spice akin to rye. Smooth and very nice mouth feel; medium low carbonation
like a barley wine (ahem), medium body, and a rich hop accentuated sweet finish.

Overall, a solid little brew that most likely gains more attention from the moniker'
of being a imperial red IPA than a barley wine---sheesh---who likes those things????

Your soaking in it Madge!

Reviewed by micada from New York

3.88/5  rDev -1.8%
look: 3.75 | smell: 3.75 | taste: 4 | feel: 4 | overall: 3.75
2018 12 oz can poured chilled. Light red/amber color. Poured aggressively to a snifter. Medium head that dissipates quickly to a lingering lace. Nose is piney, some citrus. First sips follow the nose, with good sweetness from the malt. Mouthfeel is light to medium. After warming a little, the hops jumped forward more, but never got bitter. The alcohol hides throughout. I don't usually drink reds, as those I've tried all had strange aftertastes, but this one didnt fall into that funk. Another very enjoyable, easy to drink beer that will knock you on your butt if you don't use your head to remember it's an imperial.
Mar 26, 2018
Rated: 3.92 by cozmo from New York