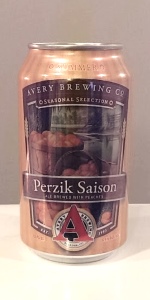 12oz can into a pint glass. Canned on date indecipherable, but based on other reviews, this is over 2 years old.

On drinking, apple, fruit, dry, lightly spiced, and ever so slightly sour. Can says brewed with peaches, but age has made them hard to detect. It's a little tingly as well

Overall, two years in the can and still a drinkable beer, not unpleasant in any way.

Peach flavor up front; faint pineapple notes on the finish.

Tastes nothing like peach. All I get is a witbier with some clove. Very disappointing.

A bit too sweet for my taste, but I enjoyed the peach. Probably someone who likes white beers would enjoy this

Purchased a 6 pack of cans on a recent road trip. Pours out to a hazy light golden, forming a small white head with poor retention and lacing. Carbonation is moderate, 2.5 carbs or so. The nose is fruity with brett, a little funk, peach nectar, white grape juice. Mouthfeel is bright, moderately acidic, medium bodied, not as dry as expected for a saison. The taste is OK and a recap of the aroma, but the peach flavor is subtle when compared to the yeast character, finishing on the slightly sweet side. The carbonation is a little less than most saisons too, perhaps due to canning. Metallic tang in the aftertaste. Bitterness isminimal, absent really.

This is ok, but it doesn't do much for me. If you like fruity saisons, it's worth a try. Well brewed, just not my cup of tea.

Poured out of a 12 oz can into a pint glass, this beer pours a somewhat cloudy/hazy, light, bright golden color with a fluffy looking white head that's about an inch thick when first poured. Head settles to a fairly thick ring lining the inside of the glass, some surface clusters of foam, and decent lacing. Aromas of some bready, grainy malt sweetness, peach, Belgian yeast, and some pepper corn spice are all nicely present along with the peach of course. Flavor wise this is pretty much the same, with bready, grainy malt sweetness that gives way to peppercorn spice, Belgian yeast that gives a nice hint of barnyard funk, peach and apricot. Has a slight floral and piney hop bitterness. Has a fairly crisp, slightly prickly, yet smooth medium bodied mouthfeel with moderate carbonation. Easy to drink in the right kind of way. An enjoyable summer time season.

This was a nice saison, balancing the usual tartness of the style with the sweetness of the added peaches. It's a summer seasonal, and you could easily have a few of these before you notice the slightly high ABV. But then again, isn't that what Avery does best?

I like this more than the average score. Nice spicy and sweet fruit aroma with the subtle blend of peach mixing in nicely throughout. Cloudy and pale with a smallish head that settles down and then eventually out. Again with the soft peach flavor mixed with the traditional saison spice and soft fruit. There is a creaminess to the feel, it having lower carbonation than most of this style, and correspondingly it holds a little more body too. Not think or heavy just not thin and effervescent. Soft dryness with a soft lingering bitterness too
I like this. An nice summer ale.

S - Fresh fruit, peaches, not a lot of hops if any

T - Peaches and a touch of farmhouse funk. I wish the funk was bolder, but a tasty enjoyable brew none the less

Pours a hazy gold color with a white head that dissipates immediately. The aroma is bread and peaches. The flavor is spicy citrus and peaches with some tartness. The feel is creamy and overall this is a pretty good beer. Not a huge fan of the style, but I love peaches so I got reeled into buying a single.

Notes via stream of consciousness: I've had this beer before. There aren't many that I'll go back to regularly, particularly peach beers, but I really enjoy this one. It's hazy golden body looks like that of a hefeweizen, but the white head above it is too short, and unfortunately it doesn't hold very well or leave much lace behind. In the nose it's yeasty, peppery, spicy with coriander, floral, grassy, and fruity with a hint of citrus, some soft banana, and peach. Not surprisingly, the flavor follows, but don't think it's big and bold, all of those notes are there but it's fairly subdued. Perhaps the peach come out strongest, and it's completely authentic, perhaps to a bit of a fault as it's kind of weird, but I love that, it goes right along with the funkiness of a saison. It's sweetish upfront but then tart in the swallow which gives it a bit of character in that it changes as it crosses the palate whereas some beers remain basically the same start to finish. Some pepper and a bit of grassiness join the tartness in the finish to dry it. Medium bodied with a restrained carbonation that explains the lack of head retention, and which I think is a fair trade-off for the smoother mouthfeel, and less carbonic acid which would probably accentuate its tartness. I am curiosu as to how it would be with more bite though. In the end this is a summer release and I think that suits it perfectly.

Pours a hazy golden color with a tight, white head that leaves little to no lacing.

Smells of bright fruits and some grain.

Tastes of the bright fruits layered with a bit of grain. Fruits lead off with notes of peach, apple, and white grape. This gives way to grainy sweetness. A bit of spice on the backend before a slightly sweet, fruity finish.

Mouthfeel is light with a crisp amount of carbonation.

Overall, this is an okay saison. A little too one note with the fruits.