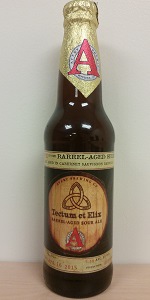 Notes: Tectum et Elix is one of the only wild/sour beers we’ve made that does not use Drie, our house Brett strain. Instead, we used multiple Brett & Sacch strains for primary fermentation, which created a much funkier beer that’s earthy, rustic, dirty, and delicious! Soured with our house pediococcus and aged for 9 months in fresh Cabernet Sauvignon barrels.
View: More Beers | Place Reviews
Recent ratings and reviews. | Log in to view more ratings + sorting options.
4.34 by hopley from Massachusetts on Feb 17, 2022

Grape skins, tannins, wet oak, and sweet tarts. Definitely wine like, but there is a bit of mouth puckering war head vibe going on. Not overwhelming, but it’s there. Very surprised this tasted this good for how old it is.

Served chilled into a stem-glass matching the label's recommended glassware and allowed to come to temperature over the course of consumption.

HEAD: Soft yet robust, with a nice creamy frothy even consistency. Off-white in colour. Holds up well, with a ~8 minute head retention. Leaves no lacing on the sides of the glass as it recedes.

BODY: Vibrant gold with loads of carbonation bubbles. Transparent and translucent. One of the more vibrant better coloured sour ales I've seen from an American brewery in recent memory. There's no haze or cloudiness, and it appears filtered and clean, lacking any visible yeast/lees. Has a gorgeous bubble show after each pour, setting off the vibrance of the golden colour.

In short, it's an excellent appearance for a sour ale. Some visible yeast might liven it up further, but it's marvelous as-is.

AROMA: Soft pale malts/Belgian golden malts are at the heart of this beer, gently withstanding the subtle assaults of the fermenting agents...brettanomyces, a Belgian strain of saccharomyces cerevisiae, pediococcus bacteria, and lactobacillus bacteria. Contrary to many American sour ales, this doesn't seem like a straight lacto-bomb; the pediococcus is right up there with it, lending bacterial intricacy to this mellow sour ale. I don't get any overt funkiness from the brettanomyces; maybe lambicus was used instead of bruxellensis? I doubt it, but I'm not finding the usual biscuity funky brettanomyces aromatics you'd expect from bruxellensis.

Has a subtle but enticing floral hop character. Definitely a flower-evocative brew.

Subtle cabernet sauvignon red wine character is present, but like the bacteria it's downplayed and subtle, not bold and in your face. Mild tannins, pleasant oak, grape, vague fruit (maybe blackberry?). Slightly jammy. Call me crazy, but I think I find notes of pear and orchard apple in there too, but it's not at all a cidery aroma.

Acidity seems above average, but not as extreme as many sour ales; the understatement of the bacteria is echoed in the acidity.

Undoubtedly appealing, suggesting a subtle delicate sour ale with admirable restraint and balance. I'm eager to try it, but I imagine there are some sour ale drinkers who will want more aggression in terms of sourness, acidity, and wine barrel. This suggests a beer of maybe a 4/10 in terms of sourness intensity.

TASTE & TEXTURE: Soft yet more acidic than I anticipated. Unfortunately, it's littered with heavy tannins from the wine barrel, which makes the texture a bit dragging instead of clean, smooth, and wet. As a result, it's not the sparkling refreshing golden sour ale I hoped for, but it is nicely light-bodied and the carbonation isn't overdone. Champagne like prickly effervescence would be preferable.

Golden malts bend to the whims of the pediococcus and lactobacillus bacteria, which lend it a ~5/10 intensity in terms of sourness. Brettanomyces bruxellensis is in there trying to impart funkiness, but it never integrates too well into the build, adding muddy barnyard funkiness where clean bacteria would do better.

Hints of orchard apple, lemon, and apple cider clash with the muddled red wine grape must flavour, eclipsing it to the beer's detriment. Little to no oak is present aside from the tannins...this seems worse for having been barrel aged, and one can imagine a stainless steel variant actually tasting better. Avery should change their wine barrel provider or stick to (ideally virgin) white oak.

It's muddled and unfocused, but it isn't all that imbalanced. The tannins are unwelcome, but they don't cripple the build. I dig the bacterial complexity and the golden malt backbone, but it could do with more Belgian ale yeast flavour (esters, phenols), and the barrel and the brettanomyces could go. Words like "earthy, rustic, and dirty" describe the beer well - but that isn't what one actually wants in a golden sour ale.

There's also a scintilla of a gueuze-like cereal flavour that gives this a bit more raw sweetness than it needs.

OVERALL: The appearance and aroma promise a better beer than the taste and texture provide, and the result is an uneven beer that wrongly puts brettanomyces above bacteria, going for an earthy funky flavour when they should be going for a clean tart acidic flavour profile. There's no doubt it's competently executed, but the barrel (read: tannic) and brettanomyces notes just don't work with the rest of the build. I'm glad I got to try it, and there's a lot of good in it, but it isn't up to par with the best of Avery's barrel aged sour ales and I wouldn't buy a second bottle.

Enjoyed at Stone's Liberty Station and World Bistro. Amazing red wine flavours from the barrels and a big lemony tartness and a nice lingering sour finish.

Aroma is the best thing here- vinegar, ripe fruit, caramel, malt, oak, Appearance had a fizzy very short lived head, no lace. Flavor's mainly vinegar, then some malt,oak and a bit of fruit.

Pours surprisingly clear bronze color with almost no head and lots of fine carbonation. Smell is tart and green, sweet tarts and grapes.

Taste is tart and fruity. Gives me a grape juice vibe. Some lemon.

Mouthfeel is smooth and slick. Overall, not a bad beer.

Brilliant, crystal clear, glowing amber appearance. A steady stream of bubbles ascended the liquid. The beer was capped by a frothy, finger-tall, cream colored head that quickly fell to a barely-there film of bubbles. Tiny droplets and small streaks of lacing tricked down the glass.

The nose was fairly generic. Initially all I could pick up was a super crisp, powdery and dry yeastiness. There was a subtle malt sweetness. As the beer sat, some oaky notes came forth. Touch of bretty tartness. An odd, metallic qualty was also present. This somehow reminded me a bit of canned tuna.

The flavor profile was somewhat uneventful as well, but it definitely had more going on than the nose. Quite tart and acidic. Apple cider vinegar notes dominated. Touch of apple-like sweetness too. Loads of bretty tartness. Super lemony. Zesty. The acidic notes intensified as the beer moved along the palate. Dry, tannic, oaky notes appeared on the back end and in the finish. There was a subtle red wine quality. Combined with the oakiness, the Cabernet barrels were definitely apparent.

Solid mouthfeel. Light, frothy and fluffy. The liquid contained a super fine yet aggressive effervescence that felt a touch over carbonated but settled nicely on the palate. By the end of the glass, the acidity in the beer left my teeth feeling a bit sensitive. Not quite "enamel stripping," but nearing this level.

So many breweries are trying their hands at creating wild ales these days. While some are outstanding, most fall somewhere in the middle of the pack. Tectum Et Elix was definitely one of the latter. Although tasty, this beer lacked nuance and complexity. A decent effort from Avery, but definitely not worth the $15 I paid for this twelve ounce bottle.