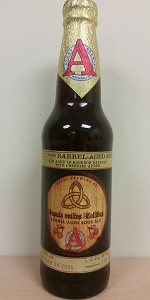 Notes: "A zymurgical ode to one of the classic - and one of our favorite - cocktails. Fancy a guess?"

We used our house Brett (Drie) for secondary fermentation and our house pediococcus and lactobacillus for souring to produce the cleanest sour beer we could to give the barrels center stage! The result was a dark red, strong sour beer that we aged in fresh Bourbon barrels for 9 months and fermented with cherries.

12 ounce bottle, bottled APR 16 2015. Served in a chalice, the beer pours a slightly hazy reddish/brown color with about an inch light tan head. Head retention is good and there's a decent amount of lacing. I like the aroma, the brew smells like cherries, caramel, vanilla, bourbon and candied oranges. I think the taste is similar to the aroma, with cherry, bourbon, vanilla, caramel, bready malt and oaky flavors. Mouthfeel/body is medium, it's slick and smooth with a good amount of carbonation. I liked this, but I do wonder if this would have been better fresher or not. Oh well, it's still worth trying if you have a bottle!

A: Poured into a tulip to a deep brown with a slight reddish hue which is topped by a finger of dense light tan head which fades quickly to a collar around the edge of the glass with minimal lacing.
S: Smells of nice sour cherries with a hint of vanilla, oak and caramel from the bourbon barrels. Really nice nose.
T: Taste is nice sourness and cherries up front with some really strong vanilla undertones. Caramel and oak come in as well along with some slight toasted malts. Decent cherry remains as well. On the swallow the beer has more vanilla and cherry with some more sourness and lingering dry oak.
M: This beer has a body that is on the heavier side of medium. Carbonation is somewhat effervescent while the adicidt ensures that the beer has a drying finish.
O: Overall this is a delicious beer. It has some nice flavors and complexity along with being very well executed. The sourness isn't over the top which leads to this beer being a really nice drink. This is definitely worth trying if they decide to make it again.

L - Cherry red, burnt orange and brown. Murky, with 1 finger of head and some pretty brown lacing left on top of the brew. Gorgeous beer

"Ale aged in bourbon barrels with cherries added." "Barrel aged sour ale." "A zymurgical ode to one of the classic - and one of our favorite - cocktails." 9.7% ABV.

Served chilled into an Avery snifter and allowed to come to temperature over the course of consumption.

HEAD: Fizzy, receding fully within 1 minute flat. Off-white with no robust creaminess or thickness to its consistency. Not thin or weak, but definitely wanting in terms of froth. Leaves no lacing on the sides of the glass as it recedes.

BODY: Pale red. Murky but not hazy or cloudy. Nontransparent. Translucent. I see no yeast/lees within. Not a clean looking brew, but it's appropriately coloured for a cherry sour.

AROMA: Lovely bacterial presence, hitting not only lactobacillus but also pediococcus. Not as tart as I imagined a cherry sour/kriek would be, but the cherry is definitely there, and seems genuine rather than medicinally artificial. Vanilla (vanillin) from the bourbon barrel plays well with the cherry, and there's a faint undertone of white oak but no bourbony heat. Brettanomyces inject some mild funkiness to this sour ale, but the focus stays rightly on the bacteria. I imagine all the brettanomyces used were bruxellensis; I can't see lambicus hurting. Some acetic cherry pie notes are present, nodding towards Flanders Reds without committing fully.

Malt backbone is tough to pin down, but I imagine it's all Belgian with 2-row, pale, and maybe a bit of amber.

A damn appealing aroma of moderate strength, suggesting a tasty but balanced sour ale with a ~5-6/10 intensity of sourness.

To style, there are no overt hoppy notes. Not big on either esters or phenols. It somehow manages to disguise its 9.70% ABV - which is monstrously high for a kriek.

TASTE & TEXTURE: Aptly medium-bodied, with appropriately moderate thickness and heft on the palate. Prickly carbonation gives it a champagne-like feel. Slightly dry, which helps coax out the oak and cherry flavours. Smooth and approachable, with no booziness at all but some welcome warmth.

Bacteria is the star of the show in this build, with pediococcus and lactobacillus providing loads of intangible intricacy in addition to the funkiness from the mild brettanomyces (bruxellensis) presence and the added nuances of the microflora. Aging in (used) oak was the right move; this is a far more lively brew than I imagine it could have been if aged in stainless steel, and its white oak undertone unites the beer, lending natural cohesion.

I do get some bourbon warmth on the finish, but other than that it drinks more like an oak aged ale than a bourbon barrel beer, with the notes of oak and subtle barrel vanillin obvious but no overt bourbon flavours like toasted coconut emerging.

The cherry presence is a bit muddy; there's no tart acidity to the cherry presence and it's not bursting with the flavour; adding cherries earlier in the fermentation process might help them feel better integrated, and more cherries with more tartness would be a good call. What does work well is the cherry pie flavour of the beer, which as noted above does nod towards Flanders Reds. I guess it tastes more like dry cherry skin than actual ripe cherries.

Sourness is maybe a 5-6/10 in terms of intensity. Hardly puckering. More of a smacky acidity and twang would help the bacteria present their sour flavours better.

It's a bit leathery in feel, which is increasingly bothersome the more I drink it, lessening its drinkability especially when combined with that parching dryness.

OVERALL: The balance isn't quite dialed in, the bourbon barrel isn't all that present, the cherry flavour is mediocre, and the mouthfeel drags a bit. But there's some nice bacterial flavour here, and it's a far more competent sour than many breweries are capable of making. I hoped for great things given how much I usually adore Avery's sours, and while this isn't a bad execution of the premise by any means, it's definitely a disappointing one given the brewery behind it. Drinkable for its (unnecessary) high ABV, but not a beer I'd buy again - especially not at this price.

Lots of things going on. Confusing. Kind of like when your wife asks you to participate in group sex with another couple......there's so much stimulation on the palette.....and the next thing you know there's a man part in your poop chute. Not cool.

Dark ruby with a loud, large, fizzy off-white head that settles to blanket and can be revived throughout.

Smell is spiced bourbon and charred oak with cherry gummies and a little red grape.

Taste is pretty tart but nice with round cherry and a slight acidic sting, finishing with red grape and a little olive brine. It gets much more sour, nearing acetic, as it warms. I'm happy you can barely tell this has bourbon barrel on it, as I'm not a fan of the old fashioned.

Pretty dry in the end.

This was amazing! Pours a brownish red color. Smell is amazing and I don't usually like the smell of sours, has tart cherries and a hint of vanilla. Taste Is Cherry with just the right amount of sour to balance with the rest of the beer. I notice the bourbon if I take quick sips but not as much when I swirl it around my mouth which leads to more of the base beer and cherry flavors. Has a very nice level of carbonation lending to a very nice mouth feel. Overall this is one of the best sours that I have had from Avery.

Pours a hazy red with tiny to no head and a small amount of extremely fine carbonation. Smell is fruit, oak, and more fruit. Moderately tart aroma.

Mouthfeel is thick and gritty. Overall, I like this beer, and I don't think I can clearly describe why.

Found a bottle of this at a grocery store in Seattle when my wife and I visited there about a month ago now. Bottled on 4/16/15. Poured into one of my tulip glasses, this beer pours a slightly cloudy/hazy medium brown/copper color with a somewhat tan, off-white head that's about 1/4 of an inch thick when first poured along with many streams of little bubbles continuously and fairly rapidly rising to the beer's surface. Has pretty solid lacing. Aromas of cherries, oak, and bourbon are all certainly present. Has a nice cherry sour, just slightly vinegary and salty, funky and musty flavor that gives way to some cherry sweetness, hints of bourbon and oak that is all rounded out with just a touch of vanilla. Very nicely balanced flavor profile here. Has a very crisp and prickly, medium bodied with heavy carbonation. Has a clean finish with a dry aftertaste. The astringent sour cherry taste really likes to linger on the palate. This is one beer that is so good you wish your glass of was never ending. I'm very impressed with this one. Well worth a try for sure!

Reddish ale with no head. Cherry nose with a funky background. Cherries on taste have sour and sweet side but Iswear this beer is dry. Sour, funk, and wood the big tastes after cherry. Medium light mouthfeel and stingy carbonation.