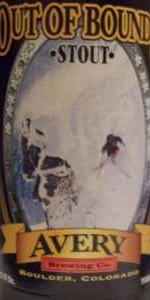 The smell is of faint coffee, caramel and dark fruit.

The taste follows the smell with the coffee being primary. Slightly bitter aftertaste. There is a slight metallic presence that is very unflattering.

Not a bad effort yet, nothing about this stout really jumps out and grabs me.

Avery Brewing Out of Bounds Stout.


I haven't seen much outta this brewery around here which is weird since apparently they have a lot of highly rated beers. I remember having their IPA which was the only brew I've had outta them buttttt it was definitely a bit on the old side based on the flavors. Anyway, hoping for something solid outta this brew. Soooo let's see what we get.


Look - From the twelve ounce bottle hard poured into a pint glass. This brew pours a deep black though it shows garnet hues here and there in the corners. The head starts off as a thick lightly mocha head which starts leaving immediate stick as the head slowly dies down. Carbonation is completely unreadable due to the depth of the brew. The remaining lacing is between low and moderate though it is quite sticky.


Smell - The smell on this brew is big and milk chocolate like. Cocoa nibs are all there as well along with a good dosage of bakers chocolate. There are hops though they are minimal to the malt levels. Smells a lot like Sierra Nevada Stout for the most part with the addition of a bit of ash like aspect.


Taste - Once again the flavor follows a lot like the nose. Big chocolate notes consisting of milk and bittersweet bakers chocolate. The hops are once again there though they are a bit earthy and once again with a touch of the ash. Chocolates develop into darkness as the brew continues to warm up. This beer is 90% chocolate and 10% hoppyness. Quite tasty but not overly huge. Again reminds me a lot of the Sierra Nevada Stout.


Feel - The feel on this beer was a bit underwhelming. The body is about moderate and the creamyness is quite nice but the overall feel wasn't as slick or as heavy as I had expected. But..this is just an American Stout and not an imperial so its kind of expected. STILL NEED A BIT MORE THICKNESS GUYS. Also...now that it's sat a good few minutes...it's taken on a nice chocolate brownie like ordeal and it coats the mouth almost strikingly accordingly to a sweet chocolate treat.


Overall - Some parts of my review were from when the beer was still cold. So disregard that. As it warmed it became a chocolatey treat. Still wouldn't drink more than two or three at a time due to the fact it is a stout after all. Probably the best standard, non imperial American stout I have ever come across. I know my review doesn't sound overly enthusiastic right now but dealing with a pre Christmas party around a bunch of asshats I can't stand is a bit annoying ;). Try this one for sure guys..

I think this an underrated beer. It pours very dark brown, almost black, with a nice one-finger beige head that recedes fairly quickly. It smells and tastes like dark chocolate with coffee notes, with a decent hop presence in the background--sort of like a junior imperial stout. This is a solid beer.

Poured from a 12 OZ bottle into a pint glass.
Aroma- Has a malt and coffee aroma
Appearance= black with a very appealing tan head.
Taste- Malt and coffee but the more I have of the beer the less impressed I am with the flavor. It seems "empty" after the beer first hits your taste buds
Palate- A heavy body brew with medium carbonation and has a slightly oily texture.
Overall- An OK stout, I was expecting much more from Avery.

Poured into a Funky Buddha Brewery snifter. No freshness date.

A- Pours a fully opaque black color with a 1/2 inch light brown head that retains well before becoming a thick ring around the edge of the glass and a half sheet of sheer surface foam. Very resilient specs of lacing cling to the glass and don't let go.

S- Semisweet aroma of dark roast brings to mind chocolate, coffee and a bit of char.

T- Roasty bitterness with a dark chocolate quality leads to some hop bitterness on the back end. Smooth and well-balanced between the sweet and bitter. After multiple sips, the hops really start to show.

M- Has the optimal viscosity of a straight-up stout with medium carbonation and a full body.

O- A very solid stout that I've been wanting to try for a while now. Drinkable, flavorful and with a bit of a hop kick. I'm on board.

Midnight black. Thanks to generous garnet highlights, the beer isn't a complete black hole. The toasted tan cap has enough substance to it that it persists as a thick, creamy cap and leaves a pretty impressive amount of lace in its wake.

The aroma is primarily of roasted malt and coffee, secondarily of bittersweet chocolate and hops. I prefer less coffee, but I can't fault it too much. The flavor is more aggressive than the nose. Unfortunately, the roasted malt is brash and borderline astringent with a charcoal-like character. Other changes relative to the nose are that coffee and hops are more prominent and chocolate recedes into the background.

An initial suggestion of sweetness fades by the midway point, giving way to a dryness that becomes parching by the finish. Irish Dry Stout is right. The flavors simply don't meld well enough for me to consider this a good version. It's a little too harsh, a little too dissonant. Points for boldness though. The body is thinner than I prefer, but not bad for the style.

Out Of Bounds Stout doesn't quite trip my trigger. As far as I'm concerned, it's a few fixes away from even being considered among the best domestic versions. Roasting the malt for a shorter time to decrease the harshness/astringency and making the body more full and creamy would be good starting points.

What a nice stout! Pours into the glass jet black and has a nice foamy head that retains well. I smell espresso and hints of chocolate...this is going to be a good beer. The taste is definitely "out of bounds". Nice and complex...roasted malts, coffee, and a hint of sweetness all lightly brush the palate but none of them are overpowering. This was easy drinking for me. A really enjoyable stout that goes well with some barbequed pork. This is pretty close to what I think of when it comes to classic stout taste. Good work from Avery.

A-pours thick brown with ruby highlights when held up to a light,fluffy head fills half of my mug postponing the rest of my pour,it leaves behind lots of stickiness

S-toffee,coffee as black and burnt as it gets

D-this stout is not nearly as drinkable as other more mass produced stout brews,but much more complex and heavy,very solid

12 oz bottle was poured into a pint glass.

Appearance: This beer poured a one finger mocha head that reduced to s thin layer. It is a pitch black color with no clarity or bubbles seen coming up through the glass. Nice lacing on the glass as the beer was drank.

Overall: Pretty nice American stout that is drinkable and enjoyable.

Poured into a pint glass. Dark black with just a weak smidge of light through at the edges. Head is one finger and a leathery tan color. The head is also creamy in appearance and the lace seems to be a bit sticky and does stay to leave it's etch on the inside of the glass.

The smell dark roasted malts that come out mostly as dark coffee grounds. There is a bit of bitter chocolate and alcohol. Wonderful!!

Initially I get the coco and coffee flavor. Quickly they are are replaced with a very tart cherry flavor and chalk finish.

The mouth is pretty standard. I think it is chalky at the end, but this is an Irish Dry Stout. So it is classified right.

Overall I am happy to have purchased this. If I trate this one or drink it?..

12 ounce bottle from Total Wine, on to the beer:

Opaque in color, some hues of ruby red are exposed towards the bottom of the glass. Great head retention, and it leaves some lacing on the glass. A pleasant aroma. Mildly intense hops mix well with the semi-sweet chocolate and powdered cocoa. Tastes...like a hoppy stout. Mocha is discovered at first. Raw roasted barley is second. Then, from nowhere, comes some juicy hops. Faint astringency on the palate in the aftertaste, but more the most part it is dry.

As the name states, this beer indeed a little out of bounds in the dry stout style. Much hoppier than the Irish counterparts. Certainly worth a purchase.

This is a rather easy to drink stout. Pours a nice nearly opaque dark color. The head was moderate in size and duration. The smell was non-stimulating, with only faint hints of the malts within. The taste is slightly better than average, being slightly malty with limited hints a fruity flavors. The mouthfeel, which is very smooth, really makes this a highly drinkable brew. While I wouldn't recommend searching this beer out, if you come across it, it is worth giving a go as a mild and highly drinkable stout.

Appearance : poured into a dfh snifter. Dark as night with a sensuous mocha cream swirl of a head.
Smell: lightly roasted coffee. Some sweetness nicely balances the roughness of the coffee.
Taste: Wow, this is better than expected. Perfectly balanced. Complex enough to be interesting and so drinkable.
Overall: this'll become a mainstay assuming decent availability. Nicely done.

Pours pretty solid black that lightens up to a slight ruby/purple as my glass gets thinner at the bottom. Good lacing developin on the sides but the tan head disappeared quickly. I poured it and set it down about 2 feet from my face but could still smell it from that distance. Smells very strongly of roasted barley.. more intense than some other Irish stouts and a little more of a raisin character to it and trails chocolate aroma. Actually very nice and I think it's underappreciated in some of the reviews. Just a little more chocolate aroma in there and it would remind me of Rogue's chocolate stout. Taste is a lot thinner than the aroma and wouldn't live up to anyone's expectations if they were looking for something super alcoholic and extreme. Lots of coffee flavors and pretty moderate bitterness with good hop flavor. On top of the roasted malt flavor there is a bit of a fruity sweetness. Kind of standard. I can see why the extreme versions of stouts get higher reviews since I'm having a hard time thinking of what they can do better here. I'd probably like to see more of a creamy/grassy beer where the flavor isn't so obviously just from X amount of roasted barley on top of a base grain. This is what you find in Guiness, IMO. Still, not bad. The coffee flavor is probably the best part of it, but it lacks the complexity needed to be unique and outstanding.