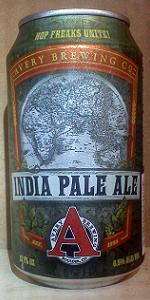 Notes: A Colorado IPA with crisp, juicy, and resinous hops and a rich, malty finish.

S: Soggy cereal, not much for hops. Expecting more of a hop presence from a fresh IPA.

T: Malt dominates the front and back. Not really what I want. Where the hell is the hop flavor?

M: Carbonation levels are where they should be. Easy drinker.

O: This is one of those beers that probably stood out 10 years ago. The game has changed, for the better, and left this one behind in the dust. The hop profile, even when fresh, is a complete joke.

Found myself up in Asheville last night, (Beerfly reviews forthcoming) and stopped in a fine little BBQ establishment on the strip. Ordered my beer before dinner, as per usual. Didn't know what to get out of the 75 or so bottles they had, but then I remebered I had not ever tried Avery IPA(I can hardly believe it myself). So I figured what the ell and ordered up a bottle. A very nice looking bottle came out, nice old style map on the front gave it a "worldly" look. Please and ready to start I dove in straight away.

Poured a reasonably clear, after some settling, orange amber color. Lots of visible carbonation. A very nice one inch white head graced the top of the glass. This faded in a couple minutes, receding into a thin film along the top that stayed with the beer till the very end. Nice residual lace in rings down the glass as the session went on. Had a decently thick appearence for an IPA and definatly looked the part.

The smell was a citrus and sugar hop bomb. Overwhelming smell of orange and tangerine overpowered just about everything else. A slight hint of sugar could be detected a well, giving it the orange popsickle kinda tone. Hints of grapefruit of pineapple bitterness could be picked up as well as the smell of fresh grass. Exactly what I would have wanted my IPA to smell like.

Diving right in my first impression was holy hops! Bigtime grapefruit and orange peel were so pronounced I could just sit there and smile. A touch of sweetness rounded out the initial feel with a dry bitter finish that left me yearning for another sip. Very clean and crisp feel, gave this the feel of a finished product and something that has been mastered. Great carbonation on the feel gave it the silky, rolling smoothness that I crave in a good brew. A tiny bit of a earthy, grainy malt tried to force its way through the full frontal hop assault. Very nice tasting IPA, quite impressed with the flavor.

Overall I have to give this one pretty marks. It really was exactly what I wanted at that time and did not dissapoint at all. It was your classic west coast hop bomb of an IPA, and that is something that I just love. Definatly a winner from Avery, a damn fine finish brew.

Pours a golden orange color, with about 2 fingers worth of white head. leaves a nice lacing.

taste starts off with big citrus, followed by pine. A strong malt back bone supports the hops and balances everything out.

Very drinkable. A great example of an IPA.

Presentation: Very cool 12oz. amber bottle. Label has a map of Europe/Asia with a sea route from Britain to India marked in red ("Duh! It *is* an IPA" my wife said...). No freshness dating.

Appearance: A bright, clear golden color on the pour. Thin white layer of foam yields tremendous lacing of the glass.

Smell: Hops all the way. Very citrusy (grapefruit?) and spicy.

Taste: It was (hang on for the revelation) hoppy. A very flavorful, bitter hop profile. More bitter than expected, actually. The bitterness REALLY shows up at the end and with the aftertaste. Didn't finish as smoothly as I'd hoped.

Drinkability: Just a slight penalty in my book for the persistent bitterness in the aftertaste. It really hung around and puckered me up. Overall, an very good beer, though not my favorite, and one that I would still drink frequently.

Strong appearance with a snow-white head, which retains well, sitting on top of a sunny rust-orange color. Thick, clingy lace streaks and lots of them.

Big citrusy aroma, all kinds of grapefruit and every part of it, flesh and rind. Orange too, even some peach and lemon. Yep, it's a total citrus bomb, but tempered just enough by some herbal tea notes.

Wow...the flavor is one for the "hop freaks" that Avery clearly brewed this for (the can proclaims "Hop Freaks Unite!"). While it carries the great citrus wallop of the aroma, it never spins out of control. There's all kinds of intensities happening thanks to the hops: spiky citrus rind bitterness, juicy orange sweetness, spicy mango, marmalade/resin stickiness...and a smidgen of toffee and herbal tea to make sure the boat doesn't totally tip over.

Smooth and just a bit creamy, with just enough carbonation tingle to make the hops sizzle that much brighter.

12 oz bottle, served in a pint glass - I bought this 'on a whim' needing one more beer to fill a self-mixed sixer.

A - nice, clear, golden color with a tall white head that settled to a layer, leaving very nice lace.

T - very good balance of hops, malt, then hops on the back end.

Pours a light, clear copper with a 2-finger white head that sticks around for awhile. Some lacing.

Not much to the smell, just some floral hops. The taste has a good IPA bitterness. Herbal, piney, flowery hops. Mouthfeel is really crisp & acidic.

This is a drinkable IPA--good hop finish with a bite.

Pours a dark straw with an inch and a half head. Good lacing throughout.
Grassy and citrus hops on the nose
Crisp hops, like a field in the middle of the summer. A light metallic ting.
Good carbonation with a dry finish.
A great, middle of the road west coast IPA. And it comes in the can! Everyone likes it in the can!!

Poured in Spiegelau IPA glass. I'm personally partial to citrusy hops. This brew is heavy on floral/pine hops, light on citrus with a long lasting bitter aftertaste. Overall an average IPA. Nothing memorable or unique that would make me buy another 6 pack.

Light apricot color with a chunky inch high head of meringue. Big aroma of sweet citrusy hops - oranges and tangerines. Pungent flavor of oranges and grapefruit, with an orange peel and pine finish. Hoppy bitterness lingers in the aftertaste. Mouthfeel is round and smooth, fills the whole mouth. A little tingly in the finish. Orange peel bitterness and tingle rises up the back of my throat to my nose. Not too much malt, but a whole lot of citrus from all the citrus fruits all around this one. Thanks to Brent for sharing.

This is a solid 'standard' easy drinking IPA.

Taste: Grapefruit hop character that is bold but well balance with malt character. This is exactly what I want with a sessionable IPA. Simple but tasty with a nice dry finish to top it off.

Mouthfeel: A bit thin feeling in the mouth. Light - medium body with adequate carbonation but just a tad too watery. Quit refreshing though just not what I expected.

Drinkability: This is certainly a beer for drinking. If you like IPAs don't waste time on a single bottle just get a case =)

A - Pours a clear golden color with about one finger of head. Good retention and leaves decent lacing on the glass.

S - Floral hoppiness with some hints of pine and citrus. Slight fruitiness in the background as well.

M - Kind of in between the light and medium bodied feel with fairly heavy carbonation. Perhaps a bit overdone on the carbonation.

D - Overall, quite drinkable and refreshing. Pretty nice hop profile and not too sweet. I could definitely see myself drinking this one again.

A- Copper in color, nice head about an inch think which retains. Very nice lacing throughout.

S- Floral aroma all around with hints of citrus and lemongrass, maybe even a little grapefruit and lots of hops.

T- Starts off slow and is a bit subdued, then finishes very strong with hops and more hops. It ends with bitterness that lingers. Not much going on besides the hops. A bit short on overall taste. Finishes tart, like a grapefruit.

D- I would have to say that this is in the class of IPA where one is enough. It is pleasant at first, but you know by the end your going to have had enough. Overall an average IPA that for me the hops dominated a bit too much.