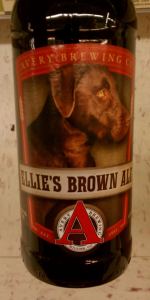 Avery never fails to deliver. This is one fantastic brown, perfect for a brisk winter day or a cool summer night. Tried one in a mix-sixer and wasn't disappointed.

Look: dark, amber in colour;
Smell: faint nutty smell? (I have virtually no sense of smell);
Taste: Tastes like a southern pecan without the sugar--blatantly malty (in the good way);
Feel: super smooth, light-medium bodied;
Overall: I'd grab one of these anyday. Superb.

A classic brown ale with lots of char, roasted malts and a brown sugary taste. Really a delicious smell with brown sugar and roasted breads. Brown ales are often unassuming but provide great mouth feel and well rounded flavors. This one hits the mark for that.

Poured from a 12oz can

The look is a very dark murky brown, and when held up to the light it becomes a dark glowing red. In the pour a nearly 2 finger head forms which shrinks to a decent cap over the course of a couple minutes. Some lacing.

The nose has some nice malty nuttiness, but throughout the whole beer there is a fermentation funk/tartness almost, similar to a lager which is odd. Other than that the aroma isn't the strongest in the world.

Taste brings some redemption with the malts being more forward, but there is still a tart fermentation note almost fruity, and it doesn't fit in the best, although it doesn't bring the overall experience down too much as the malts in this are quite nice and roasty which I enjoy. It's very yeast and malt, with a touch of hop bitterness on the back end.

Feel is balanced. For the style though it could be a bit more rich or even creamy, but it certainly isn't watery. It's very easy to put down, and probably viewed as one of averys more entry level beers. Not light not heavy but right in the middle.

Overall it's a decent brown ale. There are better more flavorful brown Ales out there but there are also much much worse. And for someone who's a malt head I'm glad this isn't some overhopped experimental brown ale.

Purchased as a single can from The Blue Door for $2.50. Poured into a nonic pint glass.

L - Clear brown (with a bit of a ruby edge), and a one-finger khaki head. Lacing is excellent.
S - Leather, cacao, and lightly browned toast. Slightly nutty.
T - Brown bread, toast, and toffee. Hinting at a bit of pipe tobacco. A definite nutty bite at the end. Well-balanced, but a strong malt backing.
F - Medium-bodied, with light carbonation. Refreshing, and easy-to-drink.
O - A fantastic brown ale. I'd say this is the bar of expectations for such. Well-rounded, balanced, and easy-going. Not overly complex, and not exactly any "deep" flavors, but very good nonetheless. The nuttiness really stands out on this one. Highly recommend!

Pleasant taste that’s chocolatey up front, followed by hints of chicory and roast, then a semi-sweet backend. The finish has some light, earthy, astringent, tea-like bitterness.

A more than competent beverage. Easy drinking, balanced, would go well with most meals.

On two consecutive occasions a twelve ounce can was emptied into a clear pint glass to obtain these observations. It looks like a cola soda, dark caramel brown, well carbonated and with a little continuing head. A light roasted malt aroma can be had by the nose and nothing more. Up front, it's sweet, which isn't necessarily bad for the style. But there’s no depth to the taste. Sparse, too, is the glass lacing, in this case an accurate warning about how thin this brew is. Of course, it's not a porter, nor stout and shouldn't be compared to them. But shouldn't a good brown ale have at least a little earthy depth? This is virtually hopless and thinly sweet, barely better than some adjunct lagers.

Easy drinking brown, straightforward, to me there's nothing to dislike here. Avery is to be trusted

12 ounce can poured into a Duvel tulip glass.

L---Clear brown when poured through light. Impenetrable brown with ruby edges when viewed in regular light. Big, fluffy, off white head that has very good retention and beautiful lacing.

This is my 2nd favorite brown ale next to Bell's Best Brown. Great malty and hoppy balance, with a touch of English in the aroma I think. What a great beer.

Poured from can to tulip glass a 2F medium tan head leaves spotty lace as it rather quickly settles to a spotty remnant of itself. Color is dark brown and about 10% transparency.

Tasting brings a slightly sweet black coffee vibe, some fruity unsweet chocolate notes and some stout like creaminess. There is kind of a hint of light toffee or caramel without going over the top on sweetness. The hops are almost non existent and barely there , there is no hint of herb or medicinal notes that often are found in some stouts or dark brown hoppy beers. I am really liking the lack of astringency, bitterness, and stickiness on the finish.

Mouthfeel is a medium bodied beer that is minimizing heavy dark fullness and creaminess and allowing the smoothness of the malt to come through without stickiness. Carbonation is on the light side and the finish is refreshing and not dried out.

What a great beer. Mostly malty but really flavorful and drinkable. I'll take this any day over any of the Dunkels I have had and over many of the overpowering stouts when not in that mood. A top pick for fall and winter rotation. Yum!

Medium-light feel, well carbonated, chewy initially and then lightens up at the finish.

A very flavorful brown ale. Definate sweet chocolate and toffee up front. Then notes of vanilla and nuts after. Very nicely balanced.

Color is a kinda boring dark, smells and tastes like a combonation of a standard beer and a porter. Very drinkable. Pours with a nice thick head, but it quickly goes away.

Ellie's Brown Ale from Avery Brewing Company
Beer rating: 87 out of 100 with 2254 ratings