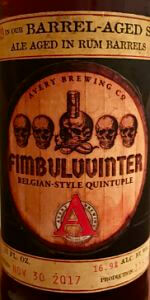 Notes: Find warmth in this rum barrel-aged odyssey, a legend of our steadfast brew warriors in their quest to take a traditional Belgian yeast to new heights of glory.
View: Beers | Place Reviews
Reviews: 35 | Ratings: 69 | Log in to view all ratings and sort
Reviews by Sparky44:

Damn, but this is a tasty monster of a beer. I find it surprising that there is even a lasting head and lacing as high ABV beers seem to lack this feature at times. The beer has incredible depth and complexity (and well it should!), balances the flavors and alcohol expertly, and is just a delight to sip and experience.

What can I say? This is the Holy Grail for people who like super high ABV beers. This is a BIG, BIG beer in every possible way. The smell is HUGE. Sweet, whiskey-ish. The flavor is HUGE. Sweet, a bit syrupy... but oh so good. The ABV will knock you on your ass.

This is a sipper. This is NOT refreshing. It is NOT a "lawnmower beer." This is for people who want to get totally trashed after just ONE beer.

I hope this beer is not a one-off, and that Avery will brew it again. It will be even more spectacular in the colder weather.

Absolutely fantastic stuff! Very sweet and very boozy. Went back to the store and bought the last 4 bottles they had.

They actually called this a "quintuple", and it deserves to be in a category by itself. Flavor may be seen as a bit cloying at first, but deep complexity, strong flavors of malt, yeast, and barrel, and warming effects overwhelm that. I actually found it best cold, like 40F. It takes a couple hours to drink a beast like this, though the bottle is only 12 oz, and I'd recommend keeping the bottle in the fridge and using a small glass, refilled every 15 minutes from the fridge bottle, until it is empty.

Goes well with raw chocolate chip cookie dough, and any rich dessert, I would imagine.

Look - This beer is a rich, dark reddish brown. The color is vibrant and it has a light head that didn't disappear immediately.

Smell - On the nose I get a lot of burnt sugar and oak. I also get something bright and somewhat fruit, like apricot.

Taste - This thing is a caramel bomb! It also has a lot of yeasty bread elements to it. There's a candied fruit flavor to it, as well, reminding me of a brandy or cognac. It has a very baked apple and apricot flavor to go with the sweet caramel and the oak. All together, it was like a sweet bread with an apple and caramel butter spread.

Feel - This is more on the watery side but is a bit sticky afterward. It makes the flavor stick around for a bit and I found myself licking my lips after each sip.

Overall - This is so frickin' good! I didn't know what I was getting into, but I loved it. It's one of the better beers I've had in quite some time. It's sweet and rich but not overly sweet. It also has a nice malty and yeasty tone to it to balance that sweet factor, and the fruity notes are bright and delicious.

Pairs Well With - Drowning my sorrows after the Loyola Ramblers loss.

yeah. what "Shade1951" just below succinctly stated. don't fault me for finding it a bit "too" translucent from my usual quad (or "quint") experiences... but, having (somehow) managed to have scored a full case of this one, it should be treated as a lifetime supply (especially considering the financial damage inflicted).

if i'm not careful, i can get a twinge of the tummy burn from the 151 benders of my misspent youth. and the following morn, finding my sea legs again. Temperance!

Follows the nose, with a little boozey rum & coke on it's heels, some cinnamon and all-spice as well, plus dryness up front. Sweet booze laced figs and raisins persists as this warms, along with dark rum warmth & dryness, just a little leafy hop as well. Finishes dry with plenty of dark fruit, to include some black cherry, & a little rum infused warmth

Lovely offering the extreme ABV is tamed by well blended flavors, going down easy on unseasonably cool/wet evening next to the gas fireplace, a sipper none the less

From a twelve ounce brown bottle, this is a hazy ochre color. The head is off-white and slim. Wonderful vanilla, wood, and malt aroma. Some spicy phenols and yeast. Ripe fruit. Wonderful. The taste has a sweetness and warmth that would be great on a cold winter evening (although I'm drinking this during a summer heat wave). Full body and thick finish.

Opening a pricey $14 bottle bottled in November of 2017, tasting in August 2019. Weighing in at 16.9% abv. Poured into a snifter. Looks a rich amber color, with a tinge of red and orange in it. Unique color.
Smells almost medicinal, very strong like the grapes of a strong wine, maybe a barley wine, or a mead, or a cheap wine you buy at the gas station and raisins a bit too. I might almost think this to be a barley wine but it’s very sweet and not bitter. Has a very warming orange raisin feel. Very sweet taste. The rum barrels it’s been aged in must’ve had some good spices in them. It’s not a cheap rum. The whole thing washes a warmth coating over my mouth and down my throat. Mouthfeel is medium thick and the carbonation seems like the bubbles are numerous and very tiny compared to an average beer. Overall very unique experience.

At a bottle share at Frontier Brewing Company and Taproom.

Taste the rum! Candi sugar like sweetness, pitted fruit, delicious and the alcohol isn't in my face.

Hell, this is a tasty treat!!

A: The beer is clear but very dark amber in color and has a light amount of visible carbonation. It poured with just some wisps of bubbles on the surface and a narrow collar of medium-sized bubbles around the edge of the glass.
S: Light to moderate aromas of rum from the barrel aging are present in the nose.
T: The taste follows the smell, but has much stronger flavors of rum from the barrel aging along with underlying hints of dark fruits and cane sugar. There is some burn from the alcohol that lingers into the finish.
M: It feels medium- to full-bodied and a little sticky on the palate with a moderate amount of carbonation.
O: This is definitely a sipping beer—it's like an Imperial Quadrupel if there was such a style.

I'm rather impressed with this. I'm not a huge belgian style fan, but this one is really nice.

12oz bottle poured into 10oz goblet. Poured a clean, clear mahogany color, with a touch of a reddish tint on the edges, with just a thin cap of tan head that had very low retention and no lacing.

Aged in rum barrels you say? I would have never been able to tell. Seriously, just the right amount of rum came through; enough to be noticeable, but not so much as to dominate. There was a touch of woodiness as well. The base beer seemed a bit muted, i didn't get any of the stone fruit aspects I usually look for in these brews. There was also some noticeable alcohol (a near 17% beer had alcohol notes? Shocked!) and some sweet malty grains.

Pretty similar on the tongue, although the the beer was noticeably sweeter in taste than in scent. maybe hints of molasses?

The body was medium-full, and a bit thinner than I had anticipated. I expected full-on syrup. In another complete surprise, the beer had a sweet finish.

Drinkability was fine, i was kinda wishing it had been a 16oz bottle by the end. Overall, a nicely solid beer. maybe my expectations were on the high side (I love Quads, so a Quint shoulda been right up my alley), but this beer missed by a touch. Still, overall, a very nice brew that is worthy of your time if you see it.

L: Poured from a bottle to a goblet. Had a dark brown color with ruby tints and a cloudy consistency. Some sediment. There was a half inch of foamy, off white, fairly long-lasting head. So-so lacing.

T: Tasted of a moderate amount of rum (and its accompanying barrel), a good amount of caramel (quite sweet), some Belgian yeast, a decent bit candi fruit (apples), and light vanilla. A big and complex flavor. Surprisingly, it's not as boozy as you might think, but it still packs a punch. The rum adds an interesting dimension to the flavor. Tasty stuff.

F: A well-carbonated beer with a warm, sharp finish. Full-bodied.

O: A powerful, likable, and interesting take on the quad style. Drinkable.

12oz bottle dated November 30 2017 poured into a snifterloudy looks a little flat orange-tinged brown body with barely a whisper of tiny bubbles and leaves no lacing. Shine a light through and the orange color jumps to almost irredescent.

Aroma is Belgian yeast with the brown sugar and sweet vanilla of the rum.

Flavors are more complex. From rum, orange pith, and spices, to booze, raisins, and vanilla.

Big bold boozy brew. Carmel in color, with a bit of a very viscous look. On the nose get rum, candied fruit, malty goodness. Mouthfeel is like a cough syrup, not in a bad way. Taste has some heat from the alcohol, candied raisins, rum cake. This is a beast of a beer.

Looks deep copper.
Smells peanut buttery with apple cider hints, in an interesting way.
Taste is seeet up front, then rich buttery malts, somewhat darker fruits/ raisin, and sugary/ slightly boozy cider notes. The alcohol, I feel, is very nicely hidden.
Feels is incredibly smooth with low carbonation and a medium body.
Dangerously drinkable.
For best timely comparison, another current extreme brew I’ve been getting is Dogfish Head 120, which isn’t much stronger than this Avery beer. Avery’s is sweeter, and different in every other way.
For me this hugs the line between good-sweet and cloying. If it wasn’t the case, I’d seek this out again ASAP.
I still may get it again. This one stands apart to me as a Belgium dessert beast.