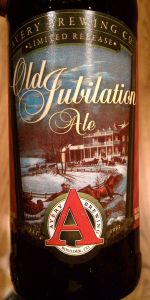 I'm way partial to malty beers. brown-amberish in color(opaque/minor light fraction) with beige long lasting head and lacing, strong sweet malty nose, hard to pick up any alcohol, same in the taste but the alcohol is quite a bit more present, lasting subtle bitterness. Would buy again ($13/6)

Here comes a 2 month old, Avery Brewing Company Old Jubilation ale! The 2016 version. I was enticed by the winter theme with Christmas being just 5 days away. The alcohol content also may have made my mind up, haha. Looking for something warm, darker, but lighter bodied then some of the heavy porters.. and I found what I was looking for!

Poured from a single can I bought into a pint glass. Dark brown almost completely opaque ale. Small retentive ring around the edge of the glass but no lacing at all pretty much. Head disappeared 2/3 of the way into the beer.

Smell is just like the can promised, mocha, toffee, a little hazelnut/other nuttiness, darker cracker malts, a little chocolate with the malts makes it a really tasty beer, and I don't really drink many darker beers. This reminds me of an extremely quaffable porter. The higher alcohol for an ale is totally hidden, making this beer easy to sneak up on you, and my requests to the beer gods for warmth was fulfilled very quickly.

A pretty unique, medium bodied beer that gives a lot of flavor. Not many hops in it, but a light carbonation reminiscent of an ale that helps it go down smooth and with a bit of lingering malt and caramel/chocolate/toffee. Kind of like a sugary dark coffee with a little bit of cream. Nice, MERRY christmas!

Pours a deep crimson color with not much head to speak of,aroma is on the malty side oranjy with some hints of chocolate but a hint of leafy hop that lingers.Taste has a light soapy quality with nice complexity dry biscuit malt with fruity estures big hit of hops comes thru though in the finish.True to the style a nice balanced complex old ale a very unexpected find here in North Carolina with the alcohol laws the way they are.

This bold holiday seasonal presents a deep, reddish-mahogany body topped by a frothy light-tan head that holds well and leaves some interesting Brussels lace throughout the glass. The nose is somewhat limited but reveals a sweet grainy malt, some dark fruitiness (raisins, prune), and a touch of floral hoppiness. The body is full with an exceptionally fine carbonation that caresses the tongue before becoming nicely creamy. The flavor is quite rich with a chocolatey note that's entwined with threads of soft dark fruit (raisins, plum, red grape) and balanced by an understated bitterness. The long finish lingers with residual semi-sweet & lightly chocolatey malt, a drying touch of alcohol, some thin hop flavor, and a light bitterness. Very nicely done with alot of character and a very good drinkability despite it's full maltiness and strength.

Pours a clear, cherry mahogany body with a small, but persistent beige head. Sticky, patch lace is all over the glass as the contents slowly disappear. Even near the finish, the small tan head can be rejuvenated with a slight swirl of the glass.

Aroma is of major maltiness up front. Molasses and dark fruits are all over the place. Figs and dates, some chestnut nuttiness, and some woodsy hops add complexity. An unusual, but pleasant, hops variety is going on here, in the background.

Taste is dominated by molasses and dark fruits. Some tart apples and cherries make an occasional foray into the flavor profile. There is a distinct woodsy and earthy character to this, that seems to derive more from the hops than the yeast. There are hints of spruce and allspice in the woodsy background scenery. Enormous complexity here, as each new sip unveils additional and complimentary flavors. Alcohol is noticed only in the aftereffect. The finish is caramel apple, dipped in spiced rum.

Extraordinary complexity of flavors. This strong old ale begs for your friendship, and your time. Spend a pleasant evening with this "ole fellar", and sip the night away with an American classic.

Not sure when this was bottled but I've been holding it personally for at least a year and 3 months, so it's at least 15 months old. Never had it before, but I figure with a bit of time on it is a good way to go with this moderately-high-strength old ale. Served between cellar and room temperature.

Pours a gorgeously-deep ruby red that appears to be very close to brown-black until held to light. Head is slightly tan and builds up to a solid 3-4 fingers before falling to about one-and-a-half, leaving behind adequate sheets of lace as it evaporates. Quite nice looking.

Nose is very deep and evocative with molasses, earthy tobacco, dark treacle, roasted nuts, toffee and bourbon-like notes. Kind of like the definitive "strong dark beer" sampler without much in the way of typical "roasty" malt character (not much coffee, chocolate or acridity for instance), all in one beer. Very, very nutty. Hazelnut is notable, as the label foretold, but I also get roasted chestnut and almond as well. Apropos of the winter season, which we are thankfully about to leave behind, hopefully for good this time.

Some chocolate on the tongue, but it's mainly swept away by residual sugar notes of blackstrap molasses, slight fig or prune-based jam/dark fruit, a wisp of smokiness and a dusty yeast note. Less nutty on the palate, instead opting for a more traditional malty English strong ale focus. Quite warming as expected; this is basically like an "enhanced Winter Warmer" with no spices and more deft malt composition to make up for the lack of adjunct flavors. In that sense, this is very nice.

Light carbonation with medium-heavy body. Slightly oily and viscous; pretty chewy and carries itself across the tongue well. Not dry but not watery or too thick either. A nice middling palate that lingers with tobacco and earthy tones until the very end.

Turns out this is quite good with some time on it. Glad I randomly saved a bottle I got. I don't think I've ever had it fresh, so I'll add that to my requirements for the 2016/2017 winter season!

Taste: Starts out with caramel, nuts and raisins and picks up some grapefruit hops in the middle; both sweet and bitter flavors battle it out to the finish but the hops ultimately are dominant.

Drinkability: Very satisfying with good complexity; I note from Avery's website that they consider this an English Strong Ale rather than a Winter Warmer

1/21/17...pours rich mahogany brown with a heady topper of white like foam. Cinnamon spiced malty nose. Raisins, plums, somewhat nutty. Taste is a mellowed malty sweetness with dark fruit layered throughout. Hazelnuts come through. Bittering is scattered. Quite complex and a tasty warmer. Not usually one for Old Ales but this one nailed it.

On tap:
A clear auburn, brown with red leanings. Head is a faded beige, and covers the surface. Lacing is sheets, with some sparseness providing a wave-like pattern.

First sip has an almost smoky malt hitting me. Similar to a scotch ale to open, a smoke-like aspect hits me before the hops come on to bring an earthy note. Cherry rises from an amber malt earth, lightly woody aspect to the hops. Dates and a tingle of alcohol weave in and out.

Medium to a bit above, the beer does fill the entire palate. Digging the bitterness that finishes this earthy beer that is neither overly complex nor very simple.

Pour is dark brown with hints of mahogany, flat head. I love the smell of this beer, I would love to find out what I can cook in my home to make it smell like this; roasted, mocha, toffee. This is similar in style to a porter, but it seems much less malty and has a contradicting sweetness. Great mocha flavor, the mouthfeel is creamy with little carbonation. The 8.3% is well hidden. Truly a drink for the holidays, it warms my throat and is less artificially sweetened than say hot chocolate, with fuller body than coffee. If this ended up under the tree Christmas morning I would be one festive camper..
P.S. I love this ale.

This beer has a deep, ruby color to it. A decent head leaves lots of lace. Slightly piney, grassy hops in the nose, with nutty malt and dark fruits. And spiced bread.

This is indeed a warmer. Dark fruit cake with nuts and some cocoa sprinkled on top. Piney are the hops. Some holiday spices in there too. Mouthfeel is thick, a little syrupy. Drinkability is limited by the youth of this beer. Better drinking in a month or two methinks.

8/29/06 Edit: Tastes much smoother, the various flavors have blended together. The hops are much milder, and the mouthfeel has thinned slightly, which is a good thing. Very drinkable, but drink now if you still have the 05. My new scores reflect this tasting.

Aroma of caramel malts, candy, some hops especially early in the glass, some toffee, and a little bit of funk.

Flavor is malty, caramel, toffee, candy sweetness, some spice, and resinous piney hops on the finish.

Had this a couple of years ago but didn't take notes, I'm enjoying this years, although the first half of the glass was much better than the second. Fuller body, bigger flavors, especially the hops.

pours a dark reddish brown with deep red highlights a light tan 2 finger head in a tulip glass. head is nice and tight with great retention and lacing. pretty beer. aroma is both hoppy and malty. sweet caramel over sweet bread and chocolate covered cherries. nice fruity aromas. first taste is a light peppery hop flavor with a mild bitterness that's quickly overcome with a malty and yeasty bready flavor. mostly dark fruit, grapes and a touch of anise. unfortunately there's a slight metallic taste. finish is dry and yeasty. mouthfeel is a touch light in body, but with good carbonation. swallow clunks too much. easy to drink as the alcohol seems to be well hidden, but the metallic flavors hinder a tad. overall, not a bad winter selection and a nice try, but not one of my favs.

Appearance: The color is light copper hue with a thin tan head.
Nose: Toasted malt, nuttiness, caramel, and molasses. There are notes of floral, citrus hops, with spices.
Taste: Toasted malt, nutty, caramel malts some molasses hints of floral, citrus hops, and some spices.
Overall: This is a nice beer with a good healthy dose of hops followed by a good malt complex laced with a nutty caramel, and molasses. It has a clean and easy finish. Enjoyed this spiciness of this Christmas ale.

An interesting take on the style. Not as dense and oily as some but has a nice, crisp mouthfeel. More carbonated than I expected. Color is a dark nutty brown. Scent is toffee, caramel, and honey. I'm surprised it's not rated higher here. It's a big, flavorful beer that's surprisingly drinkable for an old ale. I'd love to have this after a fall day raking leaves.