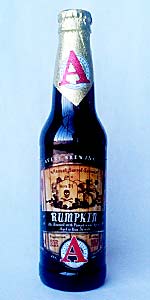 Notes: We wondered what would happen if a monstrous pumpkin ale, plump full of spicy gourdiness, were aged in fine fresh rum barrels to add suggestions of delicate oak and candied molasses. Rumpkin is what happened! This first member of the Annual Barrel-Aged Series was brewed with roasted pumpkins from a local Boulder County farm, and spiced with nutmeg, cinnamon, and ginger.
View: Beers | Place Reviews
Reviews: 351 | Ratings: 1,517 | Log in to view all ratings and sort

Look-Dark amber like a traditional rum would have, little to no head on the beer as expected with such a high ABV, moves around in the glass almost like a light syrup? Interesting.

Smell-Sugar, Spice, and boozy I do not know if I even liked the smell. It was definitely interesting.

Taste- Like a boozy syrup no kidding with spices thrown in. As it warmed up the booziness takes over even more. I feel like this would go great in a cake batter or something.

Feel-Thick like syrup, mine had mild carbonation, spicy and sweet up front with a creamy mouthfeel, and a over bearing burn on the finish.

Overall-Not a fan. Would like to try a more fresh product possibly? The 17% ABV likely went up over the years sitting in the bottle for another 3.5-4 years. Would try a more fresh bottle or if I wanted to try something like a unique cake batter that may work well with this.

I found a bottle at my local specialty beer liquor store. Date on the bottle says 2017. 4 years aged on top of what it comes fresh already. Yikes! Has some chunks in the bottom. Hoping the 16.9% will keep it still great. After sipping it for awhile it still taste pretty dang good. Wish there wasn't chunks at the bottom but towards the end this beer starts putting you down for the count at the 16.9%. Would like to try one fresh to compare..

A: Poured into a snifter to a deep golden beer that is topped by a two finger dense and slightly rocky head that fades quickly to a collar around the edge of the glass with minimal lacing.
S: Smells of pumpkin with some warming spices, vanilla, and definite rum barrel notes.
T: Taste is pumpkin and caramel with some warming spices, vanilla, and rum barrels with some hints of molasses. On the swallow there's a ton of warming spices, pumpkin, caramel, vanilla, and lingering rum barrel.
M: The beer has a full body with a feel that is slightly syrupy. Carbonation is low but adequate for the style while the beer has a drying finish.
O: Overall this is how pumpkin beers should be done. Great flavors and a nice amount of complexity make this one that is very enjoyable to drink. It ages really well too. Worth a try if you can find it and want to try a pumpkin beer that's on the extreme side of things.

L: Poured from a bottle to a pint glass. Had an orange / brown color and a mostly cloudy consistency. There was a quarter inch of foamy, somewhat long-lasting head. Above average lacing.

T: Tasted of a decent amount of rum (and its accompanying barrel), a tinge of ginger (not a huge element), lots of spices (cinnamon and nutmeg, in particular), a bit of molasses (quite sweet), and a decent amount of pumpkin, of course. Like the aroma, the flavor is big, boozy, and complex. It's quite well-rounded and satisfying. Delicious.

F: A fair amount of carbonation with a smooth, warm finish. Medium- to full-bodied.

O: An excellently made beer. Drinkable.

The brewers description is accurate. I am not sure I can add anything that has not been said. I gave my wife a taster and she thought it was a cocktail. It is that strong...and that good. Sipper for sure, but my 12 oz lasted 15 minutes max.

Medium light carbonation with a just above average body. Has a slight thick creamy feel .
Aroma is alcohol, rum, wood/ earthy, pumpkin and spices in the background.
Taste is alcohol, boozy, rum, wood, a little sweet and some alcohol burn
Overall it was excellent, I didnt feel the alcohol was as well hidden as some but for such a high abv I'm probably off on that

A medium pour resulted in a couple fingers of head that faded pretty quickly. Dark orange/brown color with noticeable sediment. Smells intensely of sweet pumpkin puree, almost overpowering. Tastes much like it smells, but not quite as intense. Some rum notes, which increase as the beer warms. A definite warming sensation, a result of the 16.9% alcohol. A dessert beer for sipping, but might be better paired with the right food.

Look - Caramel, very thin white head. No lacing, and a fair amount of sediment. Looks pretty festive and autumny.
Smell - Rum, very boozy and sweet smelling. Not really picking up much spice - maybe some cinnamon and nutmeg.
Taste - Tastes like someone smeared a pumpkin pie into a rum barrel. It's delicious, and the booze isn't that evident (except for the warming aftertaste). It is intensely sweet, definitely a dessert beer. This beer is perfect for cold autumn days. Flannel, the smell of dead leaves and this.
Feel - Not much to say here, but its oily enough to not be weird. I don't know that mouthfeel really matters with pumpkin beers.

Overall - okay, this is damn tasty. Schlafly used to be my favorite pumpkin beer, but this is pretty phenomenal. Heavy recommend, even at an outrageous price (it was $14 for a 12 oz bottle).

Reddish appearance with slight white head. Aroma is a spicy pumpkin that is very prominent. Taste is also a spicy pumpkin with a strong alcohol that has not dissipated much in two years.

Hazy caramel color. An aggressive pour gives less than one finger of head, which fades quickly to a small collar of foam. The aroma has rum, molasses, oak, pumpkin, nutmeg, cinnamon, and ginger. Tastes just like it smells. Extremely sweet. The alcohol is well disguised for 16.9 % abv. Full bodied with average carbonation. Fairly smooth and also a little sticky. Very well made.

I first tried Avery's Tweak, and fell in love. Someone recommended this seasonal variation. I didn't think I could like Tweak more, but I was wrong. Not your average Pumpkin BEER! But it is fall in glass..

L: Deep orange hue. No head or lace to speak of.

F: Choking down syrupy sugars and even devoid of carbonation to the offset this in any way. Awful.

O: I typically like Avery but this was pretty poor.

First time seeing this around here. 8 Months on this bottle.

Not sure what to think about this beer. A pumpkin beer with 16 percent and rum barrel aged makes for an unusual combination. The beer is 50 degrees and served in a tulip glass. The pour of the beer produced a one finger reddish tan head. The head of the beer dissipated reasonably quickly due to the high alcohol content. The color the beer is SRM 12 a deep amber with mahogany hues. The clarity of the beer is clear to brilliant. The head left no lacing on the glass when it fell.

The initial aroma of the beer was a toasted sugar, alcohol, and vanilla. Next, smell bananas, cloves, pumpkins, toasted oak, bready, nutmeg, molasses, caramel, and cinnamon.

The mouthfeel of the beer is warm and sticky.

The body of the beer is full, low carbonation, and a full finish.

The beer is a mouthful of wow. The beer is sticky sweet and a nice subtle rum flavors. The beer has loads of pumpkins and baking spices. I am not a fan of the massive alcohol content.

2017 vintage poured into a tulip
A: Hazy brown, thin head
S: Pumpkin, pie spice, a bit of rum/brown sugar
T: Sweet, pumpkin, pie spice, sugar syrup, a hint of rum
M: Full-bodied, quite sweet, the alcohol is well hidden
O: Tasty but too sweet for me. One to sip, may work well in a sauce for a dessert

Immediate taste was couch syrup when cooler. As it warmed up, it was way too sweet and boozy to enjoy. My girlfriend thought the same. Probably not going to try this again.

Batch No. 6. Thanks Richard and Alanna!

A: A murky brown in color with a ver small white head on top.

S: At first the aroma is just a big canon fire of vanilla, oak and rum. Returning to it you start to get maple, molasses, pumpkin, and hints of cinnamon, clove, and nutmeg.

T: Nutmeg, cinnamon, pumpkin, and spiced rum. A hint of oak and vanilla, with a touch of toasted coconut. Caramel sweetness, and bread round out the finish.

Wasn't sure what to expect, as this is my 1st pumpkin beer. Pours a murky deep copper/dirty brown color with minimal frothy chocolate milk colored head. Nose is slightly sour pumpkin pie.Taste is surprisingly sweet and spicy ,like pumpkin pie. Seems a weird tart dryness on the finish with a definite bit of alcohol creep. Definitely won't make it into 'A' rotation , but might be a once a year quaff. Unique BA brew.

Pours a foggy, hazy brown that sits completely still with no bubbles or effervescence showing. Head is a finger in height and khaki in color, and retains modestly well. Aroma is comprised of pumpkin, spices, and molasses, and is dense enough it invokes the vision of shoving your nose into a pumpkin pie and taking a sniff. Thankfully there are no solids in this sniff. Light rum at the back gives the beer a little additional spice and the light booze helps stifle the spices from running away with the show. Oak adds to the complexity. Flavor profile is big and bold pumpkin, spices, molasses, caramel, and toffee with a heavy pinch of spices right at the end. Despite starting rather balanced, it turns heavily towards the sweet side of the spectrum, and then the spices tame and dry it out. Rum adds a light booziness to it, but overall not anything stifling. Surprising smoothness for a beer hitting nearly 17% ABV! Oak helps add to the complexity in a positive way. Mouth feel carries a light grainy texture with a medium-thick viscosity that gets heavier as the beer sits and warms. Overall, woah. Had no clue this beer was nearing on 17% until I checked the bottle half way through a glass. It's smooth despite having an impressive load of flavors and nuances, and showcases pumpkin well without being cloyingly sweet. Aroma is a touch sweeter and more close to cloyingly sweet than the flavor, thus the knock down 1/4th of a point. This is a pumpkin beer (err... liquor...?) for those who like their strong ales, strong.

Served in a 12oz snifter from a 12oz bottle.

Rumpkin from Avery Brewing Company
Beer rating: 92 out of 100 with 1517 ratings