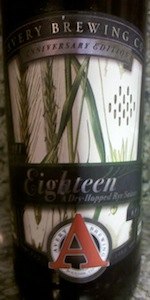 Reviewed by JizackFH from New York

S - It smells of bready malt, belgian yeast, and a nice rye spiciness. There is also some citrus fruit and an earthy grass-like smell to it.

T - The taste starts off with some nice bready malts and some rye. There is quite a bit of earthiness that really goes well with hop presence, which is stronger than in your typical saison. The finish is lingering rye spiciness and mild hop bitterness.

M - This has a medium body and moderate carbonation. It goes down easy and has a nice smooth feel to it. There is some spicy tingliness from the rye and spices. There is also a nice moderate hop bitterness throughout. There is a nice refreshing quality to this as well.

O - This has good drinkability. It goes down easy and has a nice smooth feel to it. I also found it to be quite refreshing. It is definitely an interesting take on a farmhouse ale. The rye added some nice spice notes and the dry hopping definitely increased the hop presence. Overall, i thought it was a really nice beer. I recommend trying it, and I would buy it again.

Reviewed live as a saison per the label. Expectations are average; I'm a bit skeptical of it given it was brewed with five different Belgian yeasts.

HEAD: Pours a vigorous 4 fingers of foam. Beige. Decent creaminess and thickness. Nice consistency. Average complexion. Retention is good for its ABV and age - easily 6-7 minutes. Leaves no lacing on the sides of the glass as it recedes.

Not a unique or special appearance for a saison. In fairness, it's well outside style conventions, featuring unbecoming obvious filtration. Not hazy like you'd expect.

AROMA: Hmm. Age hasn't suited the dry hopping well; depleted stale hops lurk beneath the surface. This character is quite off-putting when coupled with the ill-chosen copper malt and Belgian pale malt base. I get hints of oxidation: cardboard, marshmallow. I search for rye's signature spiciness, but don't find it. Yeast attenuation seems poor judging by the rampant sweetness. But this doesn't suffer from a dead Belgian yeast/lees off-character as I feared. Still, it's a poor aroma for a saison, lacking fundamentals: there's no intricate spicing (a la Fantome) or nuanced milkiness (a la Dupont), and I find no brettanomyces funkiness or even any grainy barnyard character (e.g. hay or straw). Ultimately, it evokes an over-malted Belgian pale. Very poorly handled.

Aromatic intensity is moderately high. One would expect a more subtle aroma in a saison.

TASTE: That weird oxidized marshmallow tone is present, and I'd say it ruins the flavour profile if not for the bit where the flavour profile wouldn't have been satisfying anyway; it's heavily over-malted, with plenty of copper malt (more apt for a barleywine or even wee heavy) and pale malt (too sweet for a saison) in addition to the usual clean barley characteristics. What's missing is the promised rye malt (which would have lent this needed subtle spiciness) and barnyard/farmhouse malt character (e.g. hay, straw, grains, et al). There's no spice profile at all, nor is there any milkiness or brettanomyces character...so how is this a saison, exactly? The dry hopping hasn't lent this any interesting hop characteristics, though I suppose I would've found those more in the aroma anyway. Hop presence is minimal but what little there is floral in character; at least in this minor respect they satisfied one of the conventions of the style.

Has some ill-placed frutiness (replete with equally unwelcome esters), English caramel/caramalt, and even toffee...are they after a Belgian feel or a British one? The subtle white pepper notes I crave in a saison are sorely absent. There isn't even any clove or basic attempt at spice. What happened?

Where to start with the criticism? Well, the balance is completely off, and the build is completely wrong. Even as a glorified Belgian pale, it's overmalted and overly sweet, and lacks depth of flavour, complexity/intricacy, subtlety, and nuance. Flavour duration is above average, as is flavour intensity (in both cases, this is to its detriment). I do not like this, but it's not unenjoyable.

The ABV is pretty well disguised. This may be its best characteristic.

As it warms, I pick up on some artificial vanillin - perhaps a byproduct of its slight oxidation during aging?

TEXTURE: Closer to the style than the taste, but still quite lackluster. It's medium-bodied, smooth, wet, aptly carbonated, unrefreshing, a bit stale, and a bit gushed.
Slight astringency is noticeable.

Overall presence on the palate is bad. This doesn't elevate the beer, nor does it do much to complement the taste.

OVERALL: A horribly conceived stab at a saison, Eighteen couldn't be further from its intended style and doesn't succeed as any other. Some of the worst work Avery's done and a beer I'd avoid in the future. Not only is it not a saison, the rye that was meant to be so focal in the build never even appears. I have to say I'm surprised this even made it to market. This is a strong Avoid, and is the kind of poor quality off-style brew I'd expect from someone like Bristol, but it's not undrinkable.

Aroma brings almost nothing but fruit, hitting on pear, peach, and green apple (possibly diacetyl). Smells more like Tusker Lager than it does a proper saison.

Taste yields heavy fruity esters from the Belgian yeasts as well as warm fermentation-derived pear and appleskin. Not as bad as I remembered it, but poor for a saison.

4.25/5  rDev +16.4%
Had a fresh one on tap in 2012 and had a May 2011 bottle also in 2012. The dry hopping gives a spicy floral character which obscures some of the saison yeast notes.
Spicy nose from the hops and the rye, light floral, fruit, caramel, light roast
Pours a beautiful clear dark reddish amber under a thin white finely bubbled foam cap.
Palate starts malty, big rye flavors, caramel, spicy, with a slight tang and blight, large pitted fruit. Dries on the finish with a moderate bitter hop accent.
Medium body and medium high carbonation, slightly warming.

Reviewed by Can_if_you_can from Minnesota