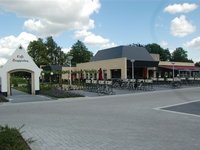 View: Place Reviews
Reviews: 7 | Ratings: 14 | Log in to view all ratings and sort
Reviews by TheLongBeachBum:

Not many people get to visit the Abbey at Westmalle, for there are no Brewery Visits, unless you know and drink with the Pope and can swing one. As such, this is likely the closest that many of us mere mortals, unbelievers, sinners and indeed all Women (the Monks are all Men) will ever get. Which is surprising as Westmalle is certainly one of the more commercially astute and proficient self promoters of the Trappisten Breweries.
It is logically West of the village of Malle (see I know my stuff!).
Located directly opposite the Abdij der Trappisten van Westmalle, the Trappisten Café is well worth a visit if you are travelling around the Antwerp province. We drove here in our 52 Seater Coach Bus, so I am unaware of the Public Transport arrangements for getting here. A typical large house type old roadside building that contains seating indoors and outdoors in various drinking areas, which can get extremely busy during warm nights in the Spring and Summer. Many suited Waiters are often on hand and service can be surprisingly sharp even at highly populated times. The Café serves the Dubbel and Tripel. The former is on draft, the latter bottled. Westmalle do not make the Tripel on draft, which is strange to fathom as I read that it represents 60% of production (?!).
The Cheese is also available to accompany the beers if you ask nicely, I find it suits the Dubbel better than the Tripel though.
Note: I was told during a recent visit (30th Nov. 2002) to The Berenbak in Antwerp (by one of the two extremely knowledgeable owners) that Westmalle Abbey only allow a maximum of 230 establishments to serve the Dubbel on draft at any one time, they should know for they too have it on Draft. I believe Chimay are the only other Trappist Beers currently available on draft, so still quite a rare form of dispense.
It is also worth pointing out to the unwary, that on our last visit, it appeared to be acceptable to have a splash of Grenadin with the draft Dubbel (as it is becoming in other areas of Belgium). Hmmm.. I tried it for research purposes. Different. But my own recommendation would be to leave drinking the Beer in this way to the Old Ladies, take it neat - like a Man ;-))

Visit if you like Westmalle and/or Cheese... A nice menu, and all Westmalle is available on tap, including the Half & Half recommendation of the house (half tripel half dubbel)

We visited here while in Belgium in Spring 2012. We'd had a long day in Brussels, and everyone was tired. Unlike many places in Europe and the UK, this place was kid-friendly, and had food everyone could enjoy. We had some (of course) great beer and a nice evening. I recommend this.

I love the Westmalle cafe. I have been here three or four times with friends. It is located right across the street from the Westmalle Monastary just outside the town of Westmalle. This place is great to go anytime, but especially good to visit in the summertime, in the afternoon. Sit back on the huge outside patio and relax while enjoying a Westmalle in the Belgian contryside on a warm summer day. It really does not get much better than that. If you go to the Westmalle cafe (aka Cafe Trappisten), order your beer and get a side order of the Trappist cheese and the Trappist mustard, both locally made at Westmalle. The cheese is great, the mustard is delicious, and the beers are even better, on draft and nice and cold (the dubbel can ordered at room temp).

If you are in Belgium and you like Westmalle even a little bit, the is a must visit. It is about 20 minutes east of Antwerp. Check it out!

We visited Trappisten Cafe last week and enjoyed the experience. Huge dining area was mostly filled with locals due to the Winter season but one large group was seated about half way through our visit.
The bar itself is immaculate with stacks of shiny clean Westmalle glasses in stacks and perfectly aligned rows of Westmalle bottles behind.
We made our way fairly well through the table menu but of course were glad to be given the English version by our waiter. We settled on the macaroni and trappist cheese with ham and a Triple. Let's just say that the bubbling casserole dish that was put down in front of us was probably the best thing we ate during our entire vacation, including Paris! It was absolutely delicious and pairing it with a Westmalle Triple really pushed it over the edge! Since that was the only thing we tried, I cannot vouch for the rest of the menu but we did see some good looking sandwiches pass by.
Trappisten Cafe is easy to get to, easy to park at, sparkling clean and has an English menu. The beer is delicious too, but you already know that!

First we walked down the cool "story book" looking pathway to the brewery/monastry, and walked around taking pics like crazy. This place seriously looked like a fairy land. Huge feild and little walking path/bike path. So beautiful.

Then we went across the street to the newly remodeled cafe. Another very suprisingly modern set up. They of coarse had their triple and double in bottles and on draft. Food was pretty good. Real light stuff, we had a salad and a sandwich. There is a display case with some liquor that they made too. Pretty cool. All in all a beautiful stop on the belgian beer tour Nov 2008. Wish I could go back right this second.

We visited the Trappisten Cafe on the way out of Antwerp. We first visited the abbey or more so walked around for about an hour and took some pictures of what you could actually see as there are no real visits.

The Cafe is right across the road in front of abbey and was hopping when we visited. We got a nice table at the outside patio and started to look at the menu. As we were basically at the Westmalle house cafe, it was an easy decision to get a Westmalle. I started with a Tripel. I was hoping that they had the rare Westmalle Extra on tap but it was unfortunately not there. Maybe next time. For lunch I ordered a croque monseuir which was very good for a sandwich. For my second beer it was a no brainer to have a Westmalle dubbel. They also had a few other guest beers which was a nice touch. Aside from the mentioned beers, they also had a beer cocktail or so listed. Once included Westmalle with grenadine. Although the thought of it was odd to me, I was tempted to try it but didn^t.

Definitely worth a visit to the Cafe if you are in Antwerp and have the time for the side visit.

Café Trappisten in Westmalle, Belgium
Place rating: 4.11 out of 5 with 14 ratings