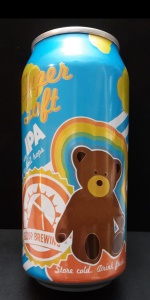 Notes: An IPA without any boil hops, & a soft finish that lands delicately on the palate. Aroma of ripe, pungent, tropical fruit & citrus. Flavor with notes of red grapefruit & papaya, with hints of black tea.
View: Beers | Place Reviews
Reviews: 33 | Ratings: 129 | Log in to view all ratings and sort
Reviews by hoppytobehere:

12 oz can, clearly dated on the package and at the bottom of the can. 1 month old at this point.

Fruit and clean. A great example of what made NE IPAs so popular. A great shelf pick-up.

Smell: Very expressive aromas off the bat of citrus and green dankness, somewhat stinky but nice. Lots of mandarin orange aroma along with some creamy peach, grapefruit, and pineapple. Smells nice.

Taste: Taste basically follows the nose. As advertised, since this is an IPA with no boil hops this has low bitterness. Yet it still has more bitterness than I would have expected. Granted, the bitterness is relatively gentle and pleasant. It just goes to show you that dry-hopping still gives some bitterness. It's also bit watery in my opinion, and I think that it smells a bit better than it tastes.

Feel: Appropriately carbonated. Soft but not quite "super soft" mouthfeel.

Overall: It's decent. Not bad and not amazing. Worth trying once, but I probably won't care to go back to it again.

Taste: Leads off with sweet flavors of clementine/orange gelato that quickly turn funky- with notes of pungent mango and ripe papaya. A transition happens midpalate, as the flavors quickly go from sweet to tart / tangy - almost as if the flavors are ripening in the beer as you drink. Just when you think the development is over, it ends cleanly on floral notes of hop resin and just a touch of sugarcookie.

Feel: Full bodied with low carbonation. Thick and fluffy without being overly viscous and stagnant.

Overall: Very enjoyable, hoppy, but well balanced enough so as to still being thirst quenching. I could see myself sessioning this, as could I see people who are a little afraid of IPAs warming up to the style after drinking it.

A: The beer is very hazy and cloudy yellow in color. It poured with a quarter finger high white head that quickly died down, leaving some specks of bubbles on the surface and some lacing down the sides of the glass.
S: Light aromas of grapefruit and tropical fruits are present in the nose. Aromas of mangos also start to become noticeable as the beer warms up.
T: The taste follows the smell and starts off with flavors of mangos and is followed by notes of grapefruit. There is a light to moderate amount of carbonation.
M: It feels medium-bodied and faintly smooth on the palate with a moderate amount of carbonation.
O: This beer is a little juicy and seems like a hybrid between an American IPA and a New England IPA.

O: A real nice easy drinking ipa. Which is what it's supposed to be.