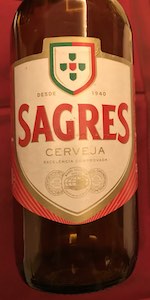 Presentation: 12oz light brown bottle. Very unusual shape that almost squares off before the short neck. Bottle is "one way," meaning no deposit, which is also unusual. Best before date clearly marked, but in Portuguese.

Appearance: Nice golden liquid with a steady, sparce large bubble carbonation. Head is patchy, practically dead, less some large bubbles surfacing. It does however turn to a creamy lace as you start drinking it, and even has a slight stick to it.

Taste: Relatively smooth and creamy mouthfeel with a crisp citrus/lime bite, as if a lime wedge was in the bottle. Carbonation, although barely noticed in the appearance, lifts and snaps at the palate ... making the limey-like hops that much more pronounced. Body is medium with an even foundation of light malt sweetness with a touch of dextrin sweetness. Finishes nice and clean with little residual flavour.

Notes: Sagres Cerveja is a fairly tasty and refreshing beer. No great shakes though.

330 mL bottle from a sixer picked up at the LCBO; best before Jan 2016. I've only had one other Portuguese beer (Super Bock), and wasn't terribly impressed with it - but this sixer was absurdly cheap by local standards (about $1.66 per bottle) so it's not like I've got much to lose here. Served ice cold.

Pours a clear golden-yellow hue, capped off with one finger of loose, soapy white head, which lasts about a minute or two before fading. A bubbly film remains at the surface, in addition to a foamy collar and a few scattered swathes of lacing. Looks fine, but the aroma is somewhat less reassuring - it mostly smells like corn chips, with a pale, malty sweetness and some vegetal undertones. Not a terrible aroma - I can't really fault a cheap adjunct lager for smelling like adjunct - but it's still worlds away from enticing.

Not much I can say about this one. The flavour consists of grainy pale barley malts, corn husk and damp cardboard. Vaguely grassy towards the finish, but it goes right back to that corny, vegetal flavour in the aftertaste; thankfully it doesn't linger long. Light-bodied and a bit watery, with the sort of aggressive carbonation levels I'd expect from this sort of beer. There is nothing overtly offensive about this beer, but I can think of no convincing reasons to pick it specifically over its many competitors in the imported lager category... other than the price.

Final Grade: 2.98, a C. Sagres is yet another mediocre, forgettable pale lager to throw on the pile. It's definitely not the worst European adjunct lager I've ever had, but there are few redeeming qualities to be lauded here. It's easy to drink, and tastes like beer - what else were you expecting? Marginally better than Super Bock, but to be honest I haven't had that stuff in years, so it's not really a fair comparison. The bottom line? For a cheap imported lager, you could do much worse than this. Mexican lager enthusiasts should appreciate this one.

Poured from a pretty cold bottle to a tulip.
Best by date says July so I am well within the limit.

Smells kinda meaty. Some old hops, sausage like. Not nice.

Taste has some upfront sweetness to it. Bready with a little tanginess. A decent malty finish and aftertaste. A lagery metallic finish though.

A decent lager. I'd try it again but it smells a little funky.

Poured from 12 oz bottle into pint glass. There's a date of "Dez 09" printed on the label so I'm guessing that's a best-by date.

Taste: not entirely watery, there is some flavor here; more than I expect from an adjunct lager. While hops are not entirely ignored, they're not present in any great amount, either.

Mouthfeel: thin and carbonated, this one is a pretty good refresher.

Drinkability: quite drinkable. It's a pretty light beer without any offensive or insipid flavors; I'm sure it's great for those hot days on the Portuguese Riviera.

On-tap at Delaney's into a Sagres pilsner glass. Why not drink a cheap Portuguese beer at happy hour, and then use the resulting buy-one-get-one chip for something I actually want to drink?

S: Nothing. Very bland, generic lager aroma of faint breadiness and nothing else. Meh.

T: Boring but crisp, with breadiness up front and a touch of metallic sharpness on the finish. Drinkable, but insipid. I.e., average for the style.

M: Frothy, prickly, but not too thin. Pretty good for an AAL, actually.

O: Portugal can brew a forgettable lager, too. Good for them?

This is a typical lager, very golden and transparent, with decent white head that leaves a little bit of lacing. Smell is nothing great, mildly sweet, dissipates very quickly. Taste is very average on the malt and minimal on hops with a crisp, clean mouthfeel. It's very easy to put down quite a few of these if you're just out for some drinks without worrying too much about having a high quality great beer. I put it just a slight notch above the commercial American lagers (BMCs).

From a brown 11.2oz. bottle. Pours a golden color with a 1/2 inch head. Mild, somewhat hoppy aroma. Taste is crisp with light malts and some bitterness. Feels light in the mouth and goes down pretty easily. Overall I found this to be a fairly enjoyable beer.

Single bottle picked up at the LCBO in the "Aisle of Lost Brews." Haven't had a beer from Portugal before.

Poured into a mini Stella glass. Nice pale golden, and clear as the day is long. A thin layer of head quickly burns off.

Nose is pretty tame, all macro lager with a bit of bread, lime and floral hops. Not altogether unpleasant. Every so often a whiff of what might be a pils.

Good palate cleanser, tastes a great deal better straight out of the bottle. A few of these on a hot day in Braga would be just the ticket, but nevertheless this is a pale lager that's been stretched to the boundaries. Not much except a bit of citrus and floral hops. A little metallic twang too.

A run of the mill pils/Euro lager brew that tastes pretty much like everything else. Bland, and with only a mild hoppage to distinguish itself. But is it drinkable in vast quantities? You bet. Just don't expect much.

I got this beer from a friend of mine. He wanted to help me with my New Year's resolution of trying at least one new beer a month.

I poured from a bottle into a 16oz glass. There was a 1/2 inch head that had some staying power. I found the taste and drinkability similar to domestic macros (which I happen to like, so it is good by my standards, which are different from most on this site). I guess I would actually place the taste as similar to some Canadian brews I have tried. Overall I give this a C+ and am quite thankful that I have friends like this.

An offering from a Portuguese-American in law, this one's fairly crisp, light-bodied and full of pretty refreshing lime-wheat type of flavor. Okay stuff.

Had this at some Portuguese hole in the wall. 330ml bottle poured into a Sagres stemmed pokal.

A- Pours a medium gold with a near nonexistent head, no lacing.

S- Metallic sweet malts, not much else. The smell was relatively weak.

T- Sweet malts, slight metallic taste, not much going on.

O- Not a bad beer for the style, better than expected. Not a beer I'd seek out, but if I ever happen to go to a Portuguese restaurant, bar, party etc, I might have it.