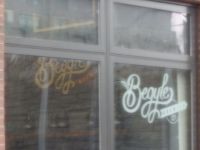 Very nice place in close proximity and walking distance of many other breweries and food places. Located in a family neighborhood, this has a nice blend of 'hip', locals and family clientele. Very friendly. Place isn't huge inside, but there are a good amount of tables. Usually 20 or so beers on draft, in a variety of styles. Beer is usually average-to-above average quality, so that's a big plus.

Comfortable place. Walking distance to two other breweries (Dovetail and Half Acre). Perfect for a one uber stop beer tour. Great bottle shop in between B and HA too.

Small but not congested taproom. Decent quality beer in a variety of styles. Multiple pour sizes. Offer growlers to go, didn't see any cans or bottles while I was there but didn't seek them out.

Service was very friendly and provided suggestions and descriptions of the beers being offered. Offered samples if I wanted.

We were there for their BA imperial Pajamas Release.. we were 10th in line but still got a seat. Service was great and they had several areas for variants, they don't serve food but had a food truck there. It was a good time, will be back.

Interesting spot with a unique layout. There was a private party happening (or it seemed) while I was there, but not a ton of lines of demarcation to know when or where I was supposed to be. Service was helpful, steering me into what I was looking to drink from the more many options.

A very hipster place with not a ton of things going on In the place, but it is all about beer and people working the place were experts. Extremely friendly with 10 taps going. Dog friendly. Went there after a wonderful day at Wrigley. I would go again. Imperial Pajamas was perfect. I picked up a bottle of 2016 Barrel aged.

On my visit to Begyle Brewing I could smell sweet wort from outside the building, but inside all that could be smelled was wet dog. Dogs were everywhere. They were laying in the walkways tripping people up, and sitting on the tables. Dog owners being dog owners, most of the dogs were being let do whatever they wanted in spite of other patrons, including myself, not wanting to be licked, brushed up against, and tripped.

As for the beer, it was solid. The coffee porter I have was well done. It was very coffee forward, but I was feeling that at the time. The three beers in the flight my brother-in-law ordered (which consisted of a two IPAs and a saison) were drinkable too (the saison being the best out of the bunch). I wouldn't hesitate to drink Begyle's beers again, and did, in fact, order a cask pour of their ESB on our next stop. It wasn't very good, but that was probably caused by how the people at Fountainhead had treated the cask (I got a bit too much oxidation which probably meant the cask had been on for too long, and I can't blame Begyle for that.).

The service at the beer counter was very fast. The beertenders were friendly, and knew their beers. My complaint (and for me this is a major complaint that I have had with many taprooms) is that none of the staff were policing the dog situation. They should have at the very least been telling people to keep their dogs out of the aisles so others could walk through unimpeded, and off the tables so that others could drink off of clean a surface (my sister and I both had allergic reactions (hives on our forearms and hands) due to a dog, or multiple dogs, clearly having been on the table we sat at.

Overall, the beer was good enough that my group would have stayed for another round if my sister and I wouldn't have gotten allergic reactions due to the poor cleanliness standards of the taproom staff.

Like other reviews it's not on the main drag, a little off it. Delicious beers, great stouts. They do a good job of serving, the staff is knowledgeable, the pale ales are numerous and we'll made. There's a see ball lounge upstairs and you can hear the balls rolling. Not a big tap room, but I enjoyed it. Highly recommended if youre in chicago check it out!!

a cool space, real small with the brewery in the back, sort of down a residential street, wasnt really sure the cab was taking us to the right spot until we got there. inside was a big Christmas tree giving a nice festive glow to the little taproom. looked like more of a beer to go vibe than a stay and drink place, but they accommodated us nicely. an impressive array of styles on tap. more beer seemingly than a place this small could churn out and keep around. all that we had were quite good, very well built and executed, but perhaps less inventive than some of the other area brewers. i dont always need a chardonnay barrel pink peppercorn brett saison with spanish cedar to be happy, so i was more than stoked to tuck into some of their staple styles. i like these small and independent breweries and tap rooms, it has a small town feel to it in a big city, very welcoming and homey, and i look forward to going back and watching how they expand. looks like they have some bombers out now too... very cool

Beers are solid if unexceptional. Very clean and well kept. I guess I just stopped by at the wrong time of year for my style preference, I will come back in mid-late fall and winter to re-review.

At the time I was there, there was no tap room. They let you have a sample of what you'd like and than you could buy beer to go. They now have a tap room I hear.
The beers were not bad. They had a stout that was good. It's worth a visit if you are in the area.

These are the places I like to go to. My wife and I stopped in on a Sunday afternoon and the place was not crowded, the bartender was very friendly, the place was spotless. Reminded me of my favorite brewery in Tampa, Six Ten Brewing. I cannot remember what I had besides two Pale Ales (I think), and the wife had a couple beers (I wake up in the morning and look at my license to remember my name). We traded a bottle of Cigar City Cucumber Saison for a bottle their Bourbon Barrel aged Stout. We'll definitely be stopping by when we go back to Chicago. I would say I like Begyle more most places I've visited in Chicago.

I was able to stop by with a party of 4 late on a Saturday afternoon.

We ordered at the bar/counter and then snagged the last open table.

They had on at least 6 house beers. Our group had some tasty pale ales and a really nice oatmeal stout. They offer beers in different sizes served in marked glassware. Service was friendly and the guys looked like they were having a blast working and pouring.

As you enter there is some swag and growlers are to your right. The place is very light due to the glass garage style door and windows on the east end. The floors are polished concrete and some of the brewing equipment is visible from behind a half wall of barrels (wonder what is in these?)

The tables are made of some nice thick wood. I wonder if they are repurposed from something like old flooring. Note that this space gets loud due to all the hard surfaces. I would guess that the tap room can seat about 25 to 30.

It is dog friendly with a water bowl set out. There were two or three dogs who brought their owners with them.
This is a great addition to a fun neighborhood!

Stopped by at 5 on a Tuesday. The newly opened taproom is certainly a beginner space. They don't have a "bar" just the retail kiosk that will pour pints for in house drinking. Pints were ~6 ( plus tax, which was a bit rare for places in Chicago). Not busy at the time I was there, but a steady flow of people coming in for growler fills, so that is a positive.

2018:
They are working on opening a second bar with more seating upstairs. There's a skeeball room that opened a year or so ago, and a regular rotation of food trucks. Saint Errant cans are a nice bonus, I usually stop in before last call after Dovetail to pick some up. Generally they have been bottling more BA stuff, which seems to be more frequently available. Got burned on some old bottles of Imperial Pajamas that were a year old. Shouldn’t happen at a brewery, imho.

Service is great, they'll give you tastes of the entire lineup if you ask, and serve small 5 oz. sizes.
If it's slow they're willing to chat about beer. Food trucks on the weekends.
The crowd is a bit trendier now, luckily Dovetail is right there if it gets too unbearable.

Selection has improved and they have recently been rotating a number of one-off variants.

2015:
Taproom is officially open, seating for 39.
Comfortable place to grab a pint, makes a good combo with Half Acre or the plentiful bars nearby.
One should reserve judgement of a brewery's beers if they only rated 2 of them...YMMV.

3/1/14:
Brewery tasting room and shop.
They are currently working on adding a taproom.
Currently no on-premise license, growler fills only.
http://www.beermenus.com/places/10845-begyle-brewing

Begyle opened their retail store 5 weeks ago, and have been selling growlers to go and merchandise out of their brewery. The location is cool, a block north of Irving on Ravenswood, from a block away at night it looked almost like an art gallery. Inside it's a clean, modern, and industrial space. White walls, concrete floor, and bright lights.

There were a couple racks with t-shirts and merchandise, and an automated growler filling station front and center. Chalkboards above listed the beers by name, logo, and abv, also growler prices for 64/32 oz. fills. They fill any growler here, which is nice, and offer 1 oz. tastes of around a dozen beers.

The staff were friendly and chatted with us for a good 20 minutes or so about their beers and other random stuff. The location is great, right off the Irving Park brown line. Glad these guys are in the neighborhood.

Begyle Brewing Company in Chicago, IL
Brewery rating: 3.87 out of 5 with 1245 ratings