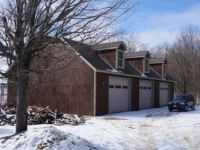 The true home of Hoof Hearted. This completely unassuming, middle of nowhere taproom is one of the best places to drink beer in Ohio. Again, it's more than a little out of the way, but all the improvements they've made from the old days, when it was just open for can releases are staggering. Everything they do is over the top and properly, well totally over hyped, but I really enjoy their beer. Not just the IPA's but just about any style they aim it is usually a hit.

An IPA lover’s dream. They have a great stylistic and modern take on the typical brewery experience. Their beers are great with a strong emphasis on IPAs. Definitely worth a visit.

If you're in central Ohio, especially in times of mild weather, a Sunday canning is a great spot to have a beer and meet some randoms. Besides having great beer, the staff is very engaging and fun, there's usually a tasty food truck, and it's located out in the country, so the scenery ain't bad either.

Went to the latest can release. The place is in the middle of nowhere..and old farmhouse feel. Release was for Konkey Dong, so needless to say there were a ton of people there. Parking was chaos. Not much room on the lot.

Long line that moved fairly quickly given the amount of people. 3 taps flowing. Plenty of helpers. Everyone was pleasant and courteous. Very laid back atmosphere. Plenty of trades and comaraderie. Fun time for sure!

A legitimate barn in the middle of nowhere. Went on a canrelease day and it was a smooth with 2 taps flowing for drafts. Parking lot looked like a tailgate, with bottle shares galore and tons of dogs roaming about. Really cool place.

Vibe was good, clean modern interior.
Quality was solid as was selection, had a good amount of choices and a superpub guest tap (Hill Farmstead).
Server was kind and helpful to some of our party that was well informed about beer.

Had a great time at the South of Eleven release this past weekend. Line went quick and the service was excellent! Would have been great for some more tables outside for people to gather, but just nitpicking at this point. If you are in the Columbus area definitely check it out during a release!

Three car garage in the middle of no where. You hear banjos. It's all about the hop juice here. Six taps of mostly egg nog looking hop heroin. No servers, no food unless there's a food truck about and not a lot of other beers.

Wonderful place. Ticketed release. Things moved slowly. Great atmosphere with a food truck. Bring a growler to fill. Only a handful of beers on tap, but they are stellar. Only open on can release days

Out in the muddy, rural countryside adjacent to Columbus is a medium-sized pole barn. Most people will only ever see this pole-barn on a can release day. The parking lot where you'll spend most of your time here seems pretty large, but only at first. They've since expanded the lot, and if they happen to ill-advisedly schedule a non-ticketed release, it STILL fills up with cars, to the point where there won't be enough space for everyone that wishes to show up.

Inside, there used to be a mobile canning company that would hurriedly fill fresh 4-packs of 16oz elixirs deposited right off the line at the cash register, still wet with rinse water and priced ridiculously low. During most releases, this process perfumed the pole-barn with an incredible dankness. These days (2017), cases of beers are neatly stacked and ready to go since they have their own canning line, and prices aren't as low as my nostalgia seems to have thought they were.

The soundtrack befits the Beavis and Butt-Head aesthetic quite well, and the staff have a pretty upbeat attitude. Considering how few days a week or month they have to deal with the demanding public, this is not as impressive as it first comes off as. A few years later, and it only seems like releases have become even more sporadic, both because they are dropping multiple cans at each release, and also because the brewpub in Columbus produces their own cans occasionally. The release schedule seems to be once every two to three weeks, and still only on Sundays. Who came up with Sunday needs strung up by their feet, and how anyone of the cashiers make a living is beyond me.

Their beers are obviously obtained fresh, and the inspiration has clearly and definitively become one-track, in the vein of the New England style IPA, with a few pastry stouts thrown in. When they started out, there were a few West Coast influences, and even moreso, a slew of softer Belgian-style ales, but these have more and more been pushed out for what is trending. Their preferred style of branding, clearly targeting a certain demographic, only exacerbates the impetus to fill this pigeon hole they've created for themselves. Sometimes their fresher IPAs can come out quite green and prickly, but that isn't going to dampen the power of the haze craze, which will only continue to grow. Besides, all you have to do is wait a few days before popping the top to get your juice box fix.

Nestled in the farmlands (or something) of Marengo, Hoof is in the middle of nowhere North of Columbus. From Cleveland, it is about a 1hr and 40min drive south. The brewery is located in a big garage/barn type building in the middle of wide open fields where all the brewing, case sales and mobile canning occurs. At the start of 2016, they are still open about every other weekend for a single day, 12-5pm.

Hoof is brewing some incredible beer, especially if you love hazy, juicy and dank IPA’s. They are the only brewery in the state doing this type of IPA that I know of, similar to that of Vermont and other east coast breweries. Needless to say, they have their niche and doing it very well.

The atmosphere can’t be beat here… In summer, people tailgate for hours with campfires, food and epic bottle shares. Everyone is super polite (employees and people who show up to buy) and the overall vibe is second to none. Really.

I highly suggest making the trip to Marengo when possible. Just make sure they are actually open for a canning release. Line up at least an hour early, as they typically sell out in the first few hours.

Really just a brewery in the middle of nowhere Ohio. Very relaxed atmosphere, just a bunch of people with big smiles on there faces who are really excited that you went out of your way to visit. These guys are brewing some amazing beers. Highly recommend the trip.

Wow ! when I popped the top and poured my first glass of this of this amazing beer, my first thought was what have I done now.But after my first drink I was hooked!
It looks like pineapple juice and looks nothing like any beer I've ever had.
The smell wasn't to over powering but definitely a true IPA. You'll have a hard time picking out all the different citrus flavors.
Now the important part. The taste!!! WOW amazing , that's all I can say !.

These guys make great beer. I have had four of their beers so far and they were all very very good. The place is located in the middle of nowhere which I liked. It looks like it is a converted wood garage they brew out of they have a very very small bar with taps and 3-5 barrel top tables to sit at. It gets really crowded so definately bring your own chair so you can sit around outside because the property is fairly big. Very laid back atmosphere bottle sharing was huge at the release I went too which was really nice.

My first visit to the brewery/taproom in Marengo. I went for the canning of Musk of the Minotaur. It is pretty remote, but an easy/scenic drive in rural Morrow County. Easy to miss as it is a barn back along the treeline with a poured concrete floor and a small bar inside. They did only have 6 beers on tap, that were all theirs (which is what I was there for) just in case you have a non beer drinker or non Hoof fan with you. The brewery people are great. Very friendly and seem very excited to be doing what they are doing. I am from a very small, rural community a couple of counties over, so the backyard atmosphere was very cool. They could use another bathroom, some more seating, and will probably need another POS for the bar soon, but very much looking forward to future visits.

Everything about this place is awesome. The only critique I had is that i wish they would have had more beers on tap. But I know with the crazy high demand of their beers it's not possible for them to have more than 4 or so at a time. Visit this place. It's awesome.

Unique brewery location on a back country road. Relaxed, fun, and employees are down to earth. Great beers, fair prices. Glassware, tee shirts, and growler fills also available. Occasional food trucks on the weekends. Drove up from Galena (20 min) for the Roller Blabe canning, left more than satisfied. Will be back for sure!

300 County Road 26 brewery and "taproom" opened this summer (2015.) The vibe is relaxed as heck because this is in the middle of farm country surrounding by nothing but fields. Service is down home, friendly. Selection is based on current releases but all their beer is outstanding so it's a small selection but you can't go wrong. Glassware are stemless wine-type glasses which are great for their IPAs and their Farmhouse Ales.

These guys are making some outstanding beers. They have had canning parties and released beers directly to the public. The taproom is in the new warehouse type structure so it's really a bar at the south end of the room. Great people, greater beer and worth the short drive north from Columbus.