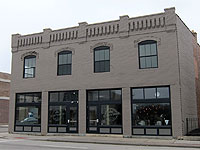 This is from a visit last fall. Nice place to sit down and do a flight of their beers. They have a program where you can actually do a brewing there with friends and then some back to bottle. Wait staff very friendly and knowledgable.

This is a neighborhood brewery mainly frequented by locals. It has a bar and tables spread , effectively, across 2 separate rooms. Plenty of panel TVs with no sound; playing music instead. They brew a good variety of beers, especially for their size. On an August 2018 visit they had 22 beers on tap. Friendly service by a hard working bartender. Judging by 4-5 beers here, their quality is a bit hit or miss, spanning a wide range.

Situated between OSUs campus and the Short North, this place has a diverse offering of beers and they are all good. Service was top notch and the beers are excellent.

Eight of us had a blast last night brewing with Sam from North High. It was a great experience and learned a ton from him. Can't wait to go back to bottle our batch of IPA. Highly recommended!

Went on a Wednesday night. The beer was great and the taproom clean and interestingly designed with the old building's mailboxes. Two problems: the beer was hilariously expensive at a minimum of 6 dollars for a short glass, and the bartender was a total asshat that didn't want to be there. Not once did I see him smile, nor properly greet a customer, and he practically threw his tablet at me to pay. I don't know if he thought himself too cool to work the taproom side or what his problem was, but I'd never recommend the place as a result.

A nice enough place, within interesting decor. They brew a lot of styles, None of them really stand out. The location makes it easy to stop by on a busy day, hopping around Columbus. The service is pretty hit or miss, usually miss. It's not a must visit, unless you're already in the area for something else.

I went on a Saturday afternoon and will never be back again. Rude bartenders. Sub-par selection. Average beer. Decent vibe once you forget about how awful the bartenders are. The bartenders look like they want to kill you. They were missing 4 out of ~8-10 handles. They told me they had no plans on putting any new beer on. I find that odd since it was roughly 3-4pm on a Saturday. Honestly, I feel like they were lying to me. Avoid this place at all cost. Spend your money at newer breweries like Zaftig or Zauber.

A brew-on-premise and pub. Decent beer, nothing too special. Bartenders are hit and miss, but the brewing helpers are usually nice and willing to chat. This place is kind of a gateway drug to brewing and craft beer, not ideal for more experienced homebrewers and beer snobs. They do overcharge their higher end offerings quite a bit which are significantly under-quality for the prices they charge ($9 for 10 oz BB Stout, $28 for 22oz BB ESB).

Stopped by this brewery on a visit to Columbus with no expectations, not even knowing it existed. I walked in to a fairly empty bar, was greeted by a friendly bartender, and began with a sampler of 6 of the 11 personally brewed offerings they had on tap that day.

The atmosphere was very enjoyable, small-time brew pub with strictly craft brews and an appeasing liquor selection (a nice variety of whiskeys, and locally distilled liquors). Bartender was nice and receptible to any and all of my questions. I was very interested to find out that they offer personal in-house brewing sessions where you can come in to brew your own batch of one of their 30 recipes right there behind the bar.

The quality of the place was outstanding from just about all aspects, and there were no complains about the service. I did not try to food (and was suggested not to as a tourist).

The selection was outstanding. This was my favorite part of the experience. They had the capacity to deliver a TRUE sampler of all different varieties, styles, colors, and tastes. I had the Wildcard English Ale (5.2%), Milk Stout - Nitro (6.0%), "Actual North" European Unfiltered Ale (5.4%), Red IPA (6.4%), "O-H-I.P.A." IPA (6.3%), and the Pride SMaSH (5.3%). I enjoyed the variety, the first two were very interesting and each rather creamy (oddly enough, in a good way), I was indifferent about the "Actual North", the Red IPA was delicious but I've had the style brewed better, the O-H-IPA was in line with my taste preference and certainly did not disappoint, but the Pride SMaSH was the only brew to leave me disappointed. Overall, my favorite had to be the Milk Stout. It was unique and particularly stood out to me because I wasn't expecting it to be one of my favorites as I normally am not thrilled by stouts but this one had something special that makes me want to come back for more!

Strange place... the wife had been here once before and said it was cool, but we couldn't find it open when we visited together. They're supposedly open at 12noon, but the doors were locked and we had to knock a couple of times to get inside.

Once in, though, the owner/bartender was cool. This used to be a post office and the building still looks beautiful and old. They have 10 taps of their own beer (Porter, Milk Stout, ESB, West Coast IPA, OHIPA) and 18 guest taps, including Mad Tree, Two Brothers, Uinta, Weasel Boy Barrel Aged Brown Stout, Fat Head's, Clown Shoes, Bell's...

We were the only costumers so it was a little awkward- I bet it is better/busier on a Friday night.

Good beer, though! Nice prices, friendly folks... can't wait to revisit. They've got a new brewmaster and are expanding from what I hear. They are also around the corner from Middle West Distillery and Brothers Drake Meadery (which also has good beer on tap).

It's a 2BBL brewery and a brew-on-premis outfit. They can handle two groups who brew 1/2 BBL at a time. Bartender told me they were adding an offsite 15BBL brewhouse.

Nice historic building (I think post office) on the happening high street although I think it's a bit on the north end.

They had around 13 house beers and another 13 or so very good guest brews on tap including 1/2 of them being from Ohio breweries. I went with a house sampler of around 9 beers. All were very good. They also had SMASH Citra and Chinook (I added the later to my sampler).

The bar tender was slightly friendly although towards the end of the visit, I joked if I could make a reservation to tour the small BOP/brewery that I talked with him about and could see through the glass and he told me with a straight face that I had to call back between 9-5 to make a reservation. The glass door says you have to make a reservation and the two BOP groups were gone and I realize the assistant brewer was working hard to clean up but I was a bit put off that I couldn't go in and take a peak.

The place was about 10% full and a bunch of people ordered off the very small food menu and the bartender disappeared for about 15 minutes and then came out with the food (panini's) so I think he was also the cook.

Overall really good beers and nice atmosphere and I would recommend and visit again.

North High Brewing Company in Columbus, OH
Brewery rating: 3.82 out of 5 with 846 ratings