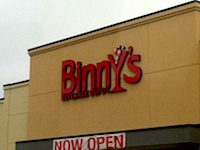 What more could you want? This place has everything! Spacious, clean, and well-lighted, a great selection of beers, wines, and spirits, and a very helpful and friendly staff. Everything is well organized and easy to find. If you can't find what you're looking for, the staff will check the inventory for you. The beer selection is nothing short of amazing, with tons of individually-priced singles and imports as well as local, regional, and national craft brands. This is a must-see if you find yourself in the Bloomington-Normal area.

Large selection and full of local brews. Almost overwhelming if you're not a frequent visitor. They have a good selection in their mix a six pack (roughly 400 bottles).

Lots of staff present and one walking around offering help. Staff are friendly overall. All the staff I have spoken with seem to be fairly knowledgeable on the beers I ask about but have been unlikely to make recommendations or point me toward new, unique offerings I would have otherwise overlooked.

Store is organized by country then by brewery which works well. They have a few end caps with new arrivals and featured brews. Lots of six packs as well as 22oz bombers and 750ml booties.

Overall, it's well worth a stop if you are in the area.

2017:
Pretty solid selection, all the IL beer up front, and an aisle of seasonals on the other side. Tryptych, Old Bakery, Big Thorn Farm, and more. Noticed some Trinity on the seasonal shelf that seemed new. A staff guy in the beer aisle fielded the questions that he could answer, and was generally helpful. A cluster of 6-7 staff members just stood up front talking though, with only one register open. Overall it was a good experience, probably matched with Friar Tuck for the best shop in town.

2012:
First downstate outpost of Binny's i've been to (27 of 29)... This one attempts to compete with Friar Tuck just a mile or so down the road. Pretty standard layout as far as Binny's go, beer is on the far right of the store, 4-5 aisles of beer, and many coolers full of craft beer sixers. Cold craft beer is almost an anomaly for the chain, hopefully a growing trend though. In the corner by the stock room doors, there was even a couple doors of craft bombers and import 750s.

There was an army of staff here, but no one actively offering help in the beer section (similar to Friar Tuck). I flagged a guy down and asked about Tasmanian IPA from Schlafly, which was already sold out here apparently, though currently plentiful in Kansas City and Saint Louis. Checkout was friendly enough also.

Selection was typically vast, though seasonal beers weren't really featured aside from an end cap with a few generic "winter ales". Mix a six area in the back of the store, though nothing remotely exciting worth picking up (did notice a bottled Bent River beer here oddly). Looked for some lambics but came up empty, which may be a distributor issue, as Friar Tuck hasn't had any for awhile either. Settled on a Genghis Pecan and moved on over to Friar Tuck, who was also out of TIPA sadly.

It remains to be seen who will come out on top, but the beer scene here could use a little competition, hopefully it pushes each store to find their niche.

Binny's Beverage Depot in Bloomington, IL
Place rating: 4.16 out of 5 with 14 ratings