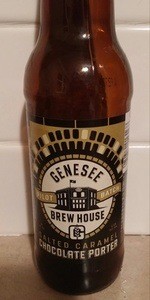 Notes: This silky smooth and elegant English-Style Porter, brewed with Hedonist Artisan Chocolate, is seductively complex with its rich caramel aroma and flavors that are balanced by a bittersweet finish.
View: Beers
Reviews: 43 | Ratings: 158 | Log in to view all ratings and sort
Reviews by ThaneMcC:

Don't be turned off by what sounds like a novelty beer - this is a tasty porter
Pours and inky brown, fb of light foam. Smells strongly of caramel, cocoa, toasted malts. Tastes sweet malts forward, caramel, salt, well balanced mid note and transition to a rather clean taste. Medium bodied with moderate carbonation.
Overall, a really pleasant porter with sweet caramal and butterscotch notes. Not sure I could drink more than one at a sitting, but an excellent cordial/desert beer to be savored.

Genessee for $3.45 a single? This one must have some rave reviews or something. I honestly have no idea what to expect going into this one. Sounds pretty good,but I guess we shall see ;).

Smell - This beer smells like a straight up ' Bit O' Honey ' or whatever the hell those things were called. The caramel is truly dominant with that honey aspects coating it to near perfection. Bit of the salt in the nostrils as well but not much of the mentioned chocolate.

Taste - The salt does become more prevelant here than it was in the nose but overall the taste remains dominated by a very sweet, medium soft candy like caramel level. I swear to you I'm getting the honey here or maybe it's just scent association of some type but it tastes like a salted bit o' honey straight from the wrapper. The chocolate does become more prevelant as the beer warms. It delivered on all the aspects it promised here.

Feel - The body on this brew is moderate with a rather high level of carbonation. Also a moderate amount of the creamy aspects due to the nice retention of the head. Flavors become more salt heavy as it sits in the mouth and it swallows easy without the cloying sweetness I was initially worries about.

Overall - I wasn't supposed to like this beer as much as I do. I can see why some hate it, Genesee being a big timer and all, but it delivers on every single aspect it states on the bottle and then some. Now mind you, this is not the kind of sweet beer you could give to a lady you're trying to screw, it isn't sweet in the ways of those who like wine coolers and Smirnoff ice, it is very obviously a dark beer with some flavors to impress amongst a rather boring English Porter portfolio coming out of the craft market. I would surely have again and I think you should try it and go into it with an open mind..

Appearance: Black color with one finger of tan head that fades with a uniform curtain of lace.

Aroma: Creamy, sweet chocolate, caramel, butter. This is dessert in a glass.

Taste: Smooth, creamy, chocolaty up front, then more of a roasted malt taste on the back end, with some lingering caramel on the finish.

The Rest: Fantastic, sweet and delicious, yet with nice balance and carbonation to keep it from being too sweet.

Flavor: Lives up to the name, with plenty of salted caramel and chocolate in this porter. A bit too sweet.

A deep walnut brown body, fairly opaque but with some nice shaded of red ruby highlights on the edges. Head manages a very good three fingers and settles nicely. Tan to slightly espresso brown color, with a creamy top and little pits as well.

Aroma is caramel overboard. Cloying syrupy candy bar smelling caramel and nothing else. One note, thick reams of artificial butterscotch and pure sugar. That's about all it has got going for it. Chocolate, roast, forget it. Everytime I take a sip it just overwhelms my face, and gets exhausting

Palate is slightly better but not letting up. Slightly prickly carbonation hits with a strange artificial almost sacchrine like flavor. Some porter like qualities come out in the finish but a weak roast and char. Mild roast bitterness comes out a bit burnt in the aftertaste. Very little porter to even beer like character in this and slightly wet as well. Where's the chocolate?

In the end there's not a lot of distinction or decent porter like flavor to this brew. The aroma is just overpowering as well and doesn't help the experience. Drinkable, but loses it's novelty quickly and doesn't make me want to ever have another let alone try it again.

This beer pours almost black in color with faint ruby highlights coming through. It it topped with a couple inches a creamy, mocha head that leaves a little lacing.

Chocolate and caramel jump out of the glass and fill my nose. The caramel is actually the dominant aroma which I have never experienced with a beer. It smells decadent and delicious.

This beer is going to be polarizing. If you like sweet, dessert beers then I would recommend it. I do, and I really enjoyed this beer. If you want dessert in a liquid form and love caramel then this beer is for you.

Bought a 4 pack from Wegman's, October 2015. Served at cellar temp in a Duvel tulip.

Overall: tastes like it's name. A nice dessert beer.

Picked this single up mixed and matched at my new favorite beer bar Carnivores in Oakmont.

A - Very dark deep looking porter with great carbonation making for a 1/2 inch of mocha tinted head that takes quite a while to dissipate. Beer is dark but not pitch with some ruby hues at the base.
S - DAMN it smells like straight up caramel like Sugar Daddy goodness! After a while I do get more dry chalky chocolate smells and some salty twang.
T - It has all the aspects I want without being too overly sweet! Cocoa nibs mixed dark chocolate, caramel and toffee with a dry salty twang one would expect in the candy.
M - Perfect body creamy and smooth with being easy to drink.

Overall pretty much as advertised in beer form but please note its not artificial or overly sugary so don't go in expecting anything but a great semi sweet porter!

Mouthfeel - medium bodied, higher level of carbonation, sweet upfront from the chocolate and caramel, salt and butterscotch in the finish

Wow. From Genesee.... It is very dark. Smells just like salted carmels and chocolate. Not bad flavor. Worth a try for sure. Nice job Genesee. Keep it up.

Appearance – The beer pours a deep-deep brown, nearly black color with a tiny fizzy cream colored head. The head fades almost instantly leaving just a trace of foamy lace on the surface of the brew and on the sides of the glass.

Smell – The aroma of the brew is delicious smelling with a huge caramel and roasty smell. Mixed with these are some big coffee and milk like aromas and a little bit of a vanilla and sea salt smell. The brew has a big caramel latte smell with a huge sweet inviting character.

Taste – The taste begins with sweeter caramel and roasted malt flavor. The coffee is light upfront, but gets slightly stronger as the taste advances. Some rather decent chocolate flavors are present upfront with these losing some ground as the taste advances. More and more caramel comes to the taste as the profile advances with some light salty flavors also joining in. In the end, with a little bit of molasses and cream coming to the tongue, one is left with a roasty and very caramel/sugary sweet flavor to linger on the tongue.

Mouthfeel – The body of the brew is on the average side with a carbonation level that is quite low. The low carbonation is rather nice, although a slightly thicker feel may have been slightly better overall. In the end the feel was alright.

Overall – A rather rich and sweet caramel flavored porter/stout. A nice slower sipper, even while still at a more moderate abv. (6.5%). A rather nice brew overall, and one to certainly try if you get the chance.